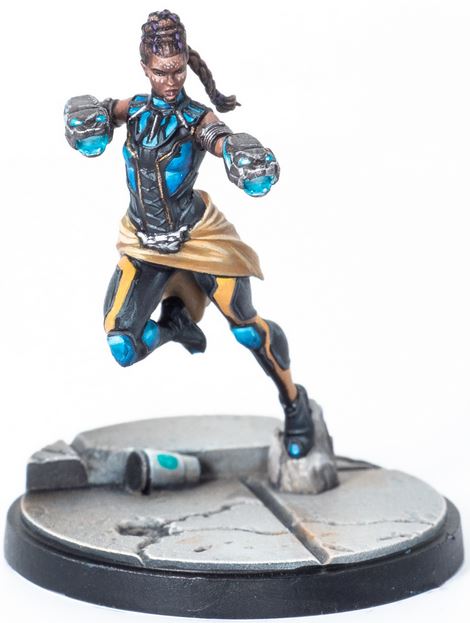 The arrival of the Shuri & Okoye pack is imminent, and it is looking like the UK release date is going to match the USA release date; so no more frustratingly watching the Facebook groups as our friends across the water open their packs and build and paint their models!  But what does the scientifically-oriented sandal-hater bring to the table in this game?  Let’s see.

STAMINA – Shuri (also known as Shuri, but sometimes referred to as Shuri) has 5 stamina, which is higher than I was expecting to be honest.  With stamina this high she will be sticking around for while, barring any unfortunate dice rolls against her.

MOVEMENT – With a movement of medium Shuri is slap bang in the middle.

SIZE – You all knew what size she was going to be before before the pack was spoiled didn’t you.  Human = size 2.

THREAT – Shuri is 3 threat, putting her on a level with Baron Zemo, Crossbones, Doctor Octopus and Iron Man.  A nice number for slipping into lists.

DEFENCES – Shuri is average all the way, with 3 dice rolled for all defences.

ATTACKS – Our first attack is an energy one with a range of 5, strength of 6 and a power cost of zero.  It is called Panther Gauntlets and states that if this attack were to deal 1 or more damage it deals 1 damage instead.  At a cursory look this may seem weak, a range 5 strength 6 attack for no power is super amazing, but you can only ever deal 1 damage with it, no matter how many hits you roll.  But this game would get old very quickly if every character’s abilities were just damage-focused.  Clearly there is more going on here so let’s read on.

After this attack is resolved the target character is pushed away short.  This is automatic, it does not require a wild roll.  As well as this, after the attack resolves Shuri gains 1 power.  So, rather than view this as a powerful attack which can only deal 1 damage, view this as a free long range push with a high likelihood to deal 1 damage and with a guaranteed gain of 1 power – sounds better when viewed that way doesn’t it? And it gets more powerful when you take into account a future superpower…

Shuri’s second attack is also an energy one and is called The Anti-Hulk, er sorry, I mean Sonic Crush.  It has a range of 2, strength of 7 and costs 4 power.  The attack text states that after the attack resolves the target character gains the stun condition; again, no wild roll is required for this.  A guaranteed stun, delicious.  As a reminder, a stunned character can only ever gain 1 power when it would gain power until it has lost the stun special condition.  On top of this, roll a wild and you can trigger stagger which, unsurprisingly, gives the target character the stagger special condition (their first action in their activation must be to shake the stagger special condition).  This attack is just Hulk-thwarter in a box!  One of the worst things that can happen to Hulk is that he gets staggered and stunned, because he can only take 1 action and only ever gains 1 power from each enemy effect or during the power phase instead of his usual 3, meaning he is going to struggle to get himself where he wants to be on the battlefield and do what he wants to do.  The fact that you can stun a character guaranteed every time you trigger this attack is fantastic, and the potential for a stagger on a wild roll is high with 7 dice being rolled.  Lovely stuff.

But what superpowers does Shuri possess? Read on!

SUPERPOWERS – First up we have the reactive superpower Super Genius which has a power cost of 1.  This superpower lets Shuri use defence results instead of hit results as successes when calculating successes for an attack, a handy power to have when you get a bit of a dud roll, ensuring that your Panther Gauntlets hits so you can deal 1 damage and gain 1 power.  Straightforward enough.

Next is another reactive superpower, and this one is called Upgrades and has a power cost of X, ooooooooo.  This superpower can be used when a character within range 4 rolls attack or defence dice.  Shuri can then spend up to 3 power and for each power spent the allied character can reroll one of their dice.  Very handy for when you are rolling that critical attack or defence, and could make the difference between a character staying on the board or getting dazed/KO’d. it does somewhat negate the Wakandan affiliation ability though.

Last of all we have the innate superpower Head of Wakanda R&D which states that whenever Shuri rolls dice, after the effect resolves she gains 1 power is she rolled at least one critical failure.  This is an interesting one and is reminiscent of Doc Ock’s ability to gain a power from rolling criticals.  It is not often that you are rolling dice and hoping for failures! But, considering her free attack rolls 6 dice the likelihood of rolling critical failures is higher than a standard strike, and so this is a nice way of potentially getting extra power.

INJURED SIDE – No change here.

SUMMARY – Shuri is a fiddly character, but I rather like her.  I will have to wait to get her to the table to see if she fits my play style.  She is pure control, but the thing that worries me is how power-starved she could become.  Panther Gauntlets and Head of Wakanda R&D are the only ways she can generate power, and even then you are either getting only 1 power per Panther Gauntlets attack or getting power from rolling fails, in which case you aren’t succeeding at what you are trying to accomplish, be that attacking or defending; although with the limit of 1 damage on Panther Gauntlets despite the number of dice rolled this superpower does have a higher chance to trigger.  It seems like she is going to be relying mostly on getting damage to gain power, which isn’t really what you want for her as she offers such good support and can trigger Panther Gauntlets from such a huge range.  The again, her attacks and superpowers are low-costed which balances this starvation out a little I suppose.

She makes sense in a Cabal affiliation, as when she triggers Panther Gauntlets and (hopefully) deals a damage, she will then get to gain an extra power due to the Cabal ability.  Her superpowers are already cheap so the Avengers affiliation isn’t amazing on her.  And I’m not too sold on her in a Wakandan affiliation to be honest.  Paying 1 to reroll a dice is good, but she is going to be so limited as to how much power she has.  Hmm, it’s a quandary.  I suppose if you are in mid to late game then you may have her in a group huddle so that you can make use of Sonic Crush and Upgrades.  The jury is still out on this one for me I think, as much as a like the “theory” of Shuri.

Team tactics cards-wise the 2 cards which come in the Shuri & Okoye pack seem apt to play with Shuri.  Vibranium Shielding is Wakandan affiliated and states that Shuri (or Black Panther) can pay X power (must be between 1 and 5) to play it.  This round Shuri and all allied characters within a range of X gain the invulnerability innate superpower.  Invulnerability states that when the character would suffer damage from an enemy effect, reduce the amount suffered by 1 to a minimum of 1, just like the Invincible Iron Man superpower.  I love this card as the cost is tied directly to range.  It could have said pay 5 power and all allied character become invulnerable, but I like that you can make the power cost fit your board state.  If your characters are all bunched up then pay 2 or 3 power and they are all protected.  If you have them spread out, spend a little more power to gain the protection.  You can plan a turn around this, getting characters into position, then triggering this card to throw up the Vibranium bubble of protection.

The second card in the pack is called Advanced R&D and is unaffiliated.  This card states that a character may spend up to 5 power to play this card, and if they do they can choose a number of allied characters equal to the power spent and each chosen character can gain 1 power.  This is great if, for some reason, you have built up a little stockpile of power on one character, especially if it looks like the character is going to be dazed/KO’d imminently.  But, I am not convinced that this card will make my list regularly.  Although it is a way of getting extra power on to Shuri, is it worth the cost of a card slot compared to some of the other cards which are currently available in the card pool?  I am not so sure.  But, just like Shuri, the proof will be in the playing, I will certainly give this a try and see how it performs in-game.

Wakanda Forever is an obvious choice to include if you are running Shuri in a Wakandan affiliation.  Each Wakandan character can spend 1 power to immediately peform a zero power cost attack.  In Shuri’s case this would get her her 1 spent power back, potentially do a damage to an enemy character and also push the target short, nice. Plus it increases the chance she will roll a critical fail and gain more power.

If Shuri is paired up in a team with M.O.D.O.K then A.I.M Lackeys could be good as it allows M.O.D.O.K to spend 3 power to allow an allied character to perform an additional move action.  This could be used effectively to get Shuri into place for support, or to get her away from danger and keep her preserved for another round.  Also, as Sonic Crush is such great control keeping Patch Up in hand could be good so that Shuri can stick around a bit longer and cripple the enemy team, especially if they are running Hulk.

Sacrifice could also be good, especially if running character who thrives off being attacked such as Venom (but then again you will be running Lethal Protector won’t you, WON’T YOU?!).  This, again, ensures that Shuri and her control sticks around on the board for a little longer.  Lastly, I thought Escort to Safety could be good, as it could potentially let Shuri dodge an attack, however it will cost her 3 power.

EDIT – I have since acquired and played with ( and against) Shuri and my oh my is she mighty.  Being able to guarantee a short push against a character is really powerful, and it is surprising how often you roll a critical failure to gain more power.  Get her and use her!

How have you found Shuri to be?  What cinematic moments have you had with her?  Comment below!

HPP 097 – Black Swan Sings Her Song and Everything Dies

How Line of Sight Works in MCP

Across the Bifrost Ep 130 Diamonds in the Rough