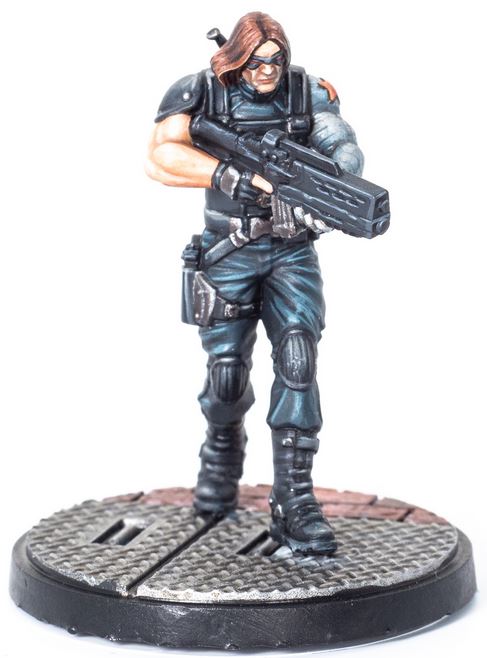 The evocatively named Winter Soldier (“Autumnal Naval Officer is not quite as exciting a name is it) is almost upon us, only a few days more until we can finally paint that shiny arm and clear a 35mm space next to Captain America. How does Bucky stand up to the ever-expanding MCP character pool? Let’s see.

STAMINA – At 5 stamina Bucky has enough to be hanging in there for a bit.

THREAT – Ah, 3 threat – that puts him in with such characters as Baron Zemo, Crossbones, Iron Man and Shuri. Not bad company, and great for list-building.

DEFENCES – Physical and energy defences are average all the way, with 3 dice rolled for each. Mystic defence is a little low, with only 2 dice rolled, fair enough considering how much his brain has been messed with.

ATTACKS – Winty comes straight out of the gates swinging (I believe this is a sports-related metaphor, and if so I apologise), with a physical attack called Assault Rifle that has a whopping range of… wait for it… 5! That’s Shuri territory! This attack has a strength of 4 and a power cost of zero. It would have been nice to have seen a strength of 5 like other standard strikes, but 4 is better than 0 so I’ll take it. This attack gains Bucky power equal to the damage dealt, and a wild will cause the target character to bleed, always a nice extra to see. Moving on!

Red Fury is another physical attack, this time with a range of 2, a strength of 7 and a power cost of 4. After this attack resolves the target is pushed away short (not optional, just like on Black Panther), and then you get to make an Assault Rifle attack against that character.  From a purely thematic/cinematic viewpoint I love this ability – whack an enemy with a hard attack, push them back a little, then unload on them with the rifle.  A 7 dice attack that leads into a free 4 dice attack with the potential for power generation and applying bleed is no small thing, and has the potential to add up to some substantial damage over the course of a game.

But what manner of superpowers does Winter Soldier have? Read on!

SUPERPOWERS – Bucky’s first superpower is active, has a power cost of 2 and is called Hydra Tactics.  This superpower let’s you place Bucky within range 1 of an allied character that is within range 2 of Bucky. We have seen with Red Skulls Master of the Cube ability how powerful this “teleporting” ability can be, and to have this built into a character card is great; and best of all there is no limit to how many times you can use it in a turn. If your allied characters are lined up right then this superpower could be chained and Bucky would get to cover some serious ground. This is going to be really useful for getting Bucky where you want him (and for setting up a certain team tactics card, but more on that later). This will be really great for getting into range 2 of enemy characters so that Red Fury can be used as well.

Next is a reactive superpower called Got Your Back, which has a power cost of 2. This superpower states that if an allied character is dazed or K.O’d then Bucky can use it, allowing him to make an Assault Rifle attack against the dazing/K.O’ing character. There is no limit to the range of this superpower, it can be triggered by any character anywhere on the board, the only restriction is the range of the Assault Rifle attack, but at range 5 you should be able to hit most things. Remember that Assault Rifle will gain Bucky power if it does damage and has the potential to get bleed onto a character, so there is benefit to firing this off. Getting any kind of advantage out of an allied character getting dazed or K.O’d is good, but hopefully your game isn’t going so poorly that you are firing this ability off too much!

Next is an innate superpower called Rogue Agent which states that for the purposes of squad building a character with Rogue Agent counts as an affiliated character. This is huge and opens up so many options for team building. Note that this superpower only applies to squad building, so Winter Soldier will not benefit from any affiliation-specific team tactics cards. Nevertheless, this is still a powerful ability. This helps smooth things out when building teams with unaffiliated characters like Venom, Doctor Octopus and Spider-Man. Got 2 avengers characters, a Venom and a Cabal character in a team? Slot in Bucky and you can now use the avengers affiliation. The wording on this superpower is interesting, perhaps we are going to be getting more Rogue Agent characters in the future?

Last of all is an innate superpower called Spetsnaz Training. No, an employee of AMG did not fall asleep on their keyboard whilst editing the character card text. This superpower states that Bucky can reroll one die when attacking or being attacked by a character within range 1. Range 1 is pretty much as close as it gets, so how often you will be firing this off is uncertain. But, rerolls are always a welcome thing, and using Hydra Tactics to teleport Bucky to within range 1 of a character is going to get him where he needs to be, so this is a nice little bonus that synergises well with his “teleport” ability, especially if you follow it up with an immediate attack. This innate ability makes Bucky a worthy character to consider for objectives that group chracters close together, like Game Waves.

INJURED SIDE – Once flipped, Winter Soldier’s stamina goes up from 5 to 6 and he starts to take his gun-wielding a bit more seriously.

SUMMARY – I do like what I see on Bucky’s card. A long range attack, albeit not overly powreful dice-strength-wise, is something nice to have, and Bucky seems like he will be quite mobile once the game is a few turns in and he has built up some power for teleporting. He is going to be great for sitting back and chipping off damage with his Assault Rifle, then later on moving in to pile on more damage and hopefully finish a few enemy characters off.

If you run him in an Avengers affiliation you can trigger either f his superpowers for 1 power each turn. He doesn’t seem like he will be putting out huge amounts of damage so Cabal might not be the best to run him in, but if you need an extra model to get the affiliation activated then why not, he will do damage at some point. Wakanda could be good, with the rerolls improving the odds of his attacks landing, and Asgard is always nice for condition and damage removal. Really, he fits anywhere you need him which is very nice indeed.

As for team tactics cards let’s first talk about Till the End of the Line which states that Winter Soldier and Captain America can pay 2 power each to play it. if within range 1 of each other then neither character can be moved by enemy effects and they combine their defensive values when creating the dice pool to defend against physical or energy attacks. Wow. Obviously this is dependent on running Cap, but with Bucky’s Rogue Agent ability that doesn’t necessarily mean you will have to run Avengers. 2 power each isn’t too steep a cost to pay, and defending with 7 dice for physical and energy attacks and being immune to pushes is pretty darn amazing. It will be interesting to see this card in action in a game, and will make for some good thematic (and fun) moments.

There are a few other cards that stand out. If you are running M.O.D.O.K then A.I.M Lackeys could be good, allowing Bucky to make an extra move action in his turn, potentially getting him where he needs to be, perhaps within range 2 for his big attack. In a similar vein, Drop Off early on in the game (maybe even in the first round if you are feeling saucy) could be good to drop Bucky in the centre of the board, then he can use his range 5 Assault Rifle attack to hit a character and be in position for a double attack action on his activation. Gamma Launch if running Hulk is similar, you just won’t get the free attack at the end of the move, but still, it’s an option.

To help Bucky throw out more damage Battle Lust could be good, allowing him to pay 2 power to add 2 damage to his next attack after a move action and potentially push the target character away short.

As Bucky is more often than not going to be within range 2 of an allied/enemy character then One-Two Punch could be a good one to include in your hand for the additional dice it allows. And lastly, Trip Up ould lso be good as it works around range 2, is cheap (2 power total) and has the potential to stun and stagger the opposing enemy character.

So, what do you make of Winter Soldier?  Comment below!