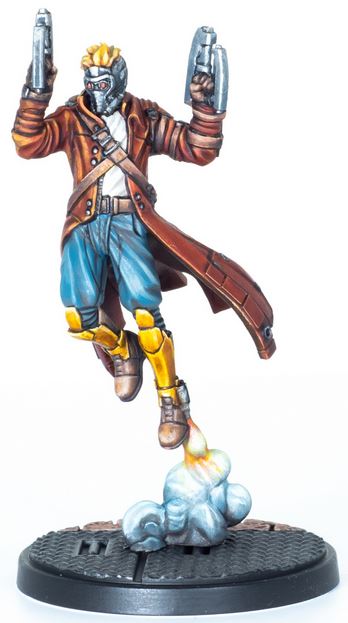 The lords of stream have seen fit to bless us with tidings of the leader of the Guardians of the Galaxy affiliation. And, as Peter Quill courted Kitty Pryde for a while, that is pretty much an X-Men confirmation, isn’t it (yes House Party Protocol, cue Idris). So, what does the GotG affiliation do, and what is Star-Lord bringing to the table? Let’s see…

STAMINA – Pete has 6 stamina which is fine enough in my book.

MOVEMENT – Lordy has a medium move which is average enough.

SIZE – In a shocking twist that startled no one, Star-Lord is size 2.

THREAT – Star-Lord is our first lower threat affiliation leader, at a mere 3 threat (all other leaders so far have been 4 threat with the exception of Thor who is 5 threat). This will make for interesting decisions when roster building, and it will be interesting to see what threat levels the remaining Guardians bring to the table.

DEFENCES – With defences of 3 right across the board Star-Lord is entirely average in this department, which is reasonable given his threat level.

ATTACKS – Pete has a mere 2 attacks, both of which are energy. The first is called Element Gun and has a range of 4, strength of 5 and power cost of zero. As usual power equal to the damage dealt is gained. This attack has a good range and a decent strength, I like it. It will be nifty for taking out characters with weak energy defences such as Venom without having to get into too close a range.

The next attack is called Full Auto and also has a range of 4, but a strength of 7 and power cost of 3. That is it for the actual attack, but there is a wild ability called Elemental Blast. Once the attack is resolved, for every wild in the attack roll you can give the defending character bleed, slow, shock or stun special condition. Wow, being able to swing with a big attack and then choose the right condition to stack onto the opposing character is fantastic. Being able to drop a long move character to a short move with slow could be played to real tactical advantage, and reducing the size of the dice pool for incoming attacks with shock adds to the preservation of your characters. It will be interesting to see how often this wild ability can be triggered, and how often you can get multiple wilds rolled to stack conditions.

LEADERSHIP ABILITY – Now we get to the biscuits, prepare for lots of text! The Guardians of the Galaxy ability is centred around a new use for team tactics cards. Once per round and at the start of your turn you may choose an allied character and discard a team tactics card. For doing so the allied character receives 3 “Winging It” tokens, and after rolling attack, defence or dodge dice it can discard a token to reroll up to 2 dice. You can only discard 1 token per roll, and all “Winging It” tokens are removed from the character during the next cleanup phase. Aaaaaaand breathe.

So, what are we saying here? We lose a team tactics card for the ability to reroll up to 2 dice during pretty much any dice roll up to 3 times on 1 character in a game round. And now the big question – is it worth it? I honestly think that this leadership ability will be divisive. Team tactics cards are a valuable resource and can often swing a game back in your favour if used correctly, and to discard them unused may seem a bit bonkers. But, if a team tactics card said “play this card for 0 power and reroll up to 2 dice for 3 separate attack, defence or dodge dice rolls on this character for this round” would you use it? Probably. And on top of that, what if you could have all 5 of your in-hand tactics cards be this same ability rather than 5 individual cards? An interesting thought. I guess it will come down to balance, effectively asking “does the benefit I gain from playing this team tactics card outweigh the benefit of having 3 instances of rerolls for this round?”

Bear in mind as well how often you finish a game with unused or unusable cards. Many of the team tactics cards are character-specific and sometimes that character can be K.O’d before the card gets played. Venom’s Lethal Protector card springs to mind. Venom can be taken down pretty quickly with a barrage of energy attacks, leaving a card in your hand that you just can’t use. Having access to an ability that let’s you ditch cards for a benefit is a nice way of making use of “dead” cards.

But, you are only ever going to be able to trigger this ability a maximum of 5 times (which is fine i guess as the game only lasts 6 rounds anyway), but that will mean you will get to play no team tactics cards at all. Compare this to the other current affiliations which you can use consistently every single turn and this may seem to be a negative. I think with this affiliation it will come down to seeing how the other Guardian characters interact with it, what (if any) other Guardian-specific tactics cards are released and just how it plays in an actual game. Still, it is an interesting design space which the game creators have opened up and it is worthy of further exploration and ponderance.

That’s enough about this affiliation for the time being, let’s move on to superpowers.

SUPERPOWERS – Star-Lord has only 2 superpowers, both of which are innate. The first is called Plucky Attitude and states that when attacking if Pete rolled no hits then he may reroll all of his current attack dice. Also, if when defending he rolled no blocks then he can reroll all of his current defence dice. Very nice, how often do we roll and only get wilds and criticals? This is a nice way of getting a bit more dice consistency from rolls which are perhaps a little weaker than we would like. In the live stream AMG stated that this can be done after adding dice from crits in the initial roll which is nice too, granting access to rerolls of an extended dice pool.

Pete’s second superpower is the innate ability flight and gem bearer [power]. Yes, Pete can fly (which is always nice to see) and he can also hold the power gem. Infinity Gems give the bearer 1 additional power during the power phase, but the Power Gem grants an additional 2 instead, meaning Pete gets a total of 3 power enduring the power phase. This means that when bearing the Power Gem Star-Lord can trigger his Full Auto attack every round – watch out, special conditions about!

INJURED SIDE – All that changes is that Quill’s stamina drops from 6 to 5 and he gets a bit torn up in the art.

SUMMARY – Another 3 threat character is nice to have, and Star-Lord seems to be a solid, straightforward and self-contained character to play. Having the ability to choose which condition(s) the opposing character gets when firing off the Full Auto attack is going to be fun to play and adds a nice layer of tactics to running Quill in a squad. I am also looking forward to seeing how the GotG affiliation ability plays out on the table, but for now I really appreciate how thematic it is – classic Guardians, all plans out the window and scrape through by the skin of their teeth.

There doesn’t seem to be much point running Pete in an Avengers squad as both his superpowers are innate and therefore there is no need for cost reduction, but if you are wanting a 3 threat character with decent range and an ability to stack conditions then why not? He will be doing some damage with his big attack so Cabal could be good, and Asgardian is good for any character really as healing and condition removal is a good thing for anyone, plus he will pair nicely with Hela for dealing out conditions. Wakanda could be good for when you have mixed rolls, but he does have rerolls built in to provide some consistency.

Team tactics cards-wise we do have to consider the new Crew of the Milano card which releases with Star-Lord as it is Guardians-specific. This card states that any number of Guardians of the Galaxy characters may pay 1 power to play it. Each character that did so removes all special conditions and cannot suffer special conditions for the round. This is an awesome card – so many characters deal special conditions now, and this is only going to increase as more characters are added to the character pool. To not only remove all conditions from each character (and for such a low cost), but to then also be immune to conditions for the rest of the round is simply amazing. Slapping this card down on the table is going to feel glorious. This card could combo nicely with Advanced R&D which allows 1 character to spend up to 5 power, then give up to 5 allied characters 1 power each. If your team is running low on power and conditions are stacking up, get them all the power they need with Advanced R&D and then play Crew of the Miano to ditch those conditions and gain temporary immunity.

Battle Lust would allow Pete to do a Full Auto attack with 9 dice, stick on his conditions and then push the target character short which would be a fun move to pull off. As Quill has flight then Drop Off is a viable option too.

Also, any card that adds dice to Quill’s attack pool will be good to increase the odds of rolling a wild and getting as many special conditions stacked onto a character as possible. As such One-Two Punch could be good as it adds 2 extra dice for a low power cost.

So what do you make of Star-Lord?  And what think you of the Guardians of the Galaxy affiliation ability?  Comment below!

HPP 115 – Malekith is Online and Operational

Across the Bifrost Ep 148 Hydra Box Review, Zola and Strucker