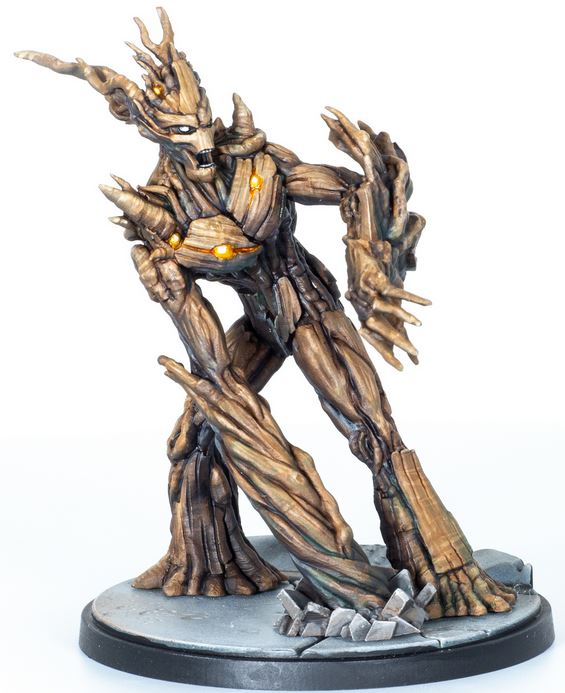 Fresh from the surface of Planet X (ooooo, mysterious) comes the Flora Colossi named Groot. Just when you thought all the “we are Venom”-ing was dying down, AMG have come swinging in with the next “we are”, so prepare yourself for the social media onslaught come mid-March. But what does Groot do in-game? And, more importantly, does he poo? Let’s see.

STAMINA – Groot has an absolutely whopping 7 stamina! That’s some serious staying power on the board, and a nice reassuring figure to see when a big attack comes in.

MOVEMENT – Alas Groot moves only short. But, he is on a 50mm base so it is better than a smaller character moving short.

SIZE – Groot is another size 3 character that we get to add to our list, always a welcome thing.

THREAT – At 3 threat Groot is at a nice threat level to slip into a good few lists. 3 is the magic number!

DEFENCES – Groot has a mixed bag of defences, with 4 physical, 2 energy and 3 mystic. As with Venom, clobber him with the energy attacks to take him down swiftly. Still, 4 physical defence is nice.

ATTACKS – Groot has but 2 attacks, both of which are physical. The first is a strike attack called Strike (oh yes), and has a range of 2, strength of 5 and power cost of 0. As is standard, power equal to the damage dealt is generated after this attack resolves. 5 dice is a nice enough strength and this is a straightforward enough attack. Moving on!

Groot’s second physical attack is called I AM GROOT! and has a range of 2, strength of 8 and costs a massive 6 power! For this princely sum you get a big pool of 8 dice, but you also get to throw the target character medium before damage is dealt. This is a pretty darn glorious throw because, if you will notice, there is no limit on character size. So far we have very few options for throwing size 4 characters, so to have an additional option added to the game is very nice indeed. On top of all of this the target character also gains the stagger condition once the attack has resolved. Stagger is arguably one of the best special conditions in the game – this attack keeps getting better and better! 6 power though, ouch! I guess the key is to keep cycling through Strikes to get that power built up.

But what manner of superpowers does El Grooterino have? Read on!

SUPERPOWERS – Groot has a mere 2 superpowers, the first of which is active and is called Living Plant. This superpower has a cost of 2 and states simply that when using this superpower you get to remove 3 damage from Groot. Amazing. In an Avengers affiliation this would cost a mere 1 power when used first in your turn. Potentially pulling off a 3 stamina heal every turn is glorious. We all know how good healing cards like Patch Up and Field Dressing are, so here is one on Groot for use every turn. Considering Groot has 7 stamina and can heal himself it is going to take some big hits to wipe him off the board. Notice as well that there is no limit to how many times in a turn this card can be used. Got 4 power? Boom, 6 damage healed and Groot is back in business. Glorious.

Next up we have the active superpower Tangling Vines which costs 2 power. This superpower states that Groot gets to choose an enemy character within range 3 of Groot and give it the root special condition. And what is this root special condition you ask? Root states that the character must spend 1 power before using an active or reactive superpower. Ouch! This combo’s nicely with Loki’s God of Mischief superpower, meaning that nearby characters would have to spend 2 power extra before getting to use their superpowers. Sheesh. Again, there is no limit to how many times in a turn this superpower can be used, so deal root out to as many enemy chara ters as you can, have at it!

INJURED SIDE – No change, Groot just looks that little bit more epic in his art.

SUMMARY – Just like Star-Lord, Groot seems like a really straightforward and fun character to play. I can see me shoving the Guardians released so far to a newer player just because of their ease of use. He has nice high stamina, a good big attack with a great throw and the ability to stagger an enemy, inbuilt healing with no turn limit, and the ability to stick root onto a character; what’s not to love?! Plus, that model is visually delicious and I can’t wait to paint it. It seems that playing Groot is going to be all about taking damage to gain power (as well using his Strike attack), and then using some of that to heal and pay for his big attack. It could end up being a game of balance, and I am interested to see how he actually plays on the table.

Obviously Groot is Guardians of the Galaxy affiliaited and fits into that affiliation nicely. He would work well in an Avengers list too, with both of his superpowers only costing 1 power. That’s 1 power to heal 3 damage, and 1 power to give an enemy character within range 3 root. Just let that sink in. He would work in Cabal too, with his 8 dice I AM GROOT! attack potentially dealing out some damage, but 6 power is a heavy cost to bear and so may not be triggering as often as one would like, and so not generating as much power from Cabal attacks as you may wish. Asgardian is always good, but Groot does have built in healing which is superior to the Asgardian healing, but Asgard could help regulate Groot’s damage input and smooth out the balancing act between taking damage and gaining power. And lastly, Wakanda is good anywhere because rerolls are delicious are they not.

The 2 team tactics cards that come in the Rocket & Groot character pack are both Groot-specific, however Deadly Duo is more Rocket Raccoon focused and so we will not discuss it here. We Are Groot, however, is all about Groot and so is most worthy of discussion. Groot may spend 3 power to play it and if he does so then allied characters within range 4 of him remove 2 damage. Un. Believable. Range 4 is a big distance, 3 power is relatively cheap for the effect, and removing 2 damage from each character is a huge deal – that’s the difference between a dazed character and a character who can continue to activate during the round! And best of all, this is an unaffiliated card, you don’t have to be running Groot in any specific affiliation to include this card in your roster. If you are running Groot in a team then I really can’t think of any reason why this wouldn’t be an auto-include.

If you want to do a monster attack with Groot then Battle Lust could be a good option as it would allow Groot to pay 3 power to add 3 dice to his next attack roll after a move action, very nice – that’s an 11 dice I AM GROOT! attack for a cost of 9 power. A high price to pay, but gloriously fun to execute!

Groot is also a very viable target for doomed prophecy. He would lose all of his defence dice for physical attacks, but would get to pull off his I AM GROOT! attack with 12 dice and his standard Strike for 9 dice (which would also generate power). Any power gained could then be poured into Living Plant to heal Groot from any damage taken, and this combined with a bodyguard character like Captain America or Okoye could mean that Groot is doing huge swings for a turn before going down.

Due to Groot’s high stamina and healing ability he could be a good target for carryint extract objectives, and as such Mission Objective could be a good card to have to transfer an objective onto him so he can keep hold of it for some time before dropping it.

Lastly, As it is quite likely that Groot will be teaming up with Rocket then One Two Punch is a great card to have in hand, as the 2 characters will (or rather should) always be close by each other. This card allows Groot and another character within range 2 to spend a power each to add 2 dice to an attack roll, making for a nice big swing. As an alternative to this Smash does a similar thing but only requires 2 power from 1 character, as long as they are close to a terrain feature smaller than they are. Also, Seeing Red is one to consider because Rocket and Groot will more often than not be within range 2 of each other. As Rocket is very squishy the likelihood of him getting taken down is high, and this card will give you an out of turn attack if/when this occurs, for the cost

So, what do you make of Groot?  Will you be running him sans-Rocket? Comment below!