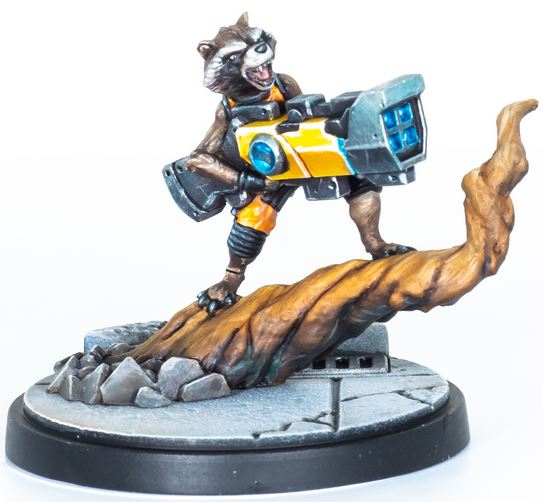 Rocket is so much more than a leafy salad ingredient, a means of space travel and an excellent song by Def Leppard; he is also The Guardian of the Keystone Quadrant. Alas Wal Rus has not yet been announced, and so for now the small, striped weapon-zealous mammal will have to suffice. So, what does this tiny zealot of weapons technology bring to the game?! Let’s see…

STAMINA – Prepare yourselves people. Rocket has only a trifling 3 stamina – an easy target for a one-shot. Let’s hope he has some decent defence abilities!

MOVEMENT – A medium movement makes him entirely average in the walking department.

SIZE – Rocket is the smallest of all in the game (currently), being size 1. This is a new size in the game and means that Rocket is going to struggle to get over most terrain, depending on the board you are playing on of course. Deployment location will be key here.

THREAT – Rocket is at last another 2 threat character which we slip easily into our lists. He is in good company with Black Widow and Okoye.

DEFENCES – Just like Rocket’s stmaina, his defences are looooooow, with 2 dice rolled for physical, 2 for energy and 3 for mystic. The odds of Rocket going down swiftly are high!

ATTACKS – Rocket has 2 attacks, the first of which is an energy attack called Plasma Rifle which has a range of 5, strength of 5 and power cost of 0. As usual for this “strike-which-is-not-a-strike”, power equal to the damage dealt is gained. Range 5 is maximum distance, and 5 dice is no slouch for a basic attack – this has nice damage potential and is 1 dice stronger than Winter Soldier’s range 5 basic attack.l, nice.

Rocket’s second attack is another energy one and is called Hadron Enforcer. This attack also has a range of 5, but a strength of 7 and power cost of 4. Roll a wild and you will get to trigger Vortex which deals 1 damage to targets within range 2 of the target character, as well as pushing them towards the target character short (before damage is dealt). Again with the range 5 – Rocket will hit you from across the board, and with 7 dice this attack is no slouch. 4 power isn’t horrendously expensive either, but I suppose that the majority of Rocket’s power generation will be from his basic attack and his 1 power per turn, rather than from taking damage, as taking damage is the last thing Rocket wants to be doing. But still, pushing characters nearby to the target and then doing damage to them is a nice ability to have, every bit of damage helps!

SUPERPOWERS – Rocket’s first superpower is a reactive one called Booby Traps, and has a power cost of 3. This superpower states that when an enemy character ends its movement within range 3 of Rocket, Rocket can spend 3 power and roll 4 dice. The enemy character suffers 1 damage for each critical and wild rolled. We have seen a similar ability before in the form of Counter-Strike on Black Widow and Baron Zemo, the difference here being the trigger. For Widow and Zemo the trigger was an incoming enemy attack, here the trigger is an enemy ending its movement within range 3 of Rocket. This superpower has the potential to be a thorn in somebody’s flesh, especially if you are also running Loki and Groot, as it will make your opponents superpowers cost more, and damage them when they are trying to move about the board. How often you will be able to trigger this I don’t know as it is dependent on getting power onto Rocket, preferably without him taking damage. All being well the majority of your power will be going towards Rocket’s attacks, but then again if you have the power and see an opportunity why not go for it, it may be just enough damage to finish a character off.

Rocket’s second superpower is also reactive and is called Personal Bodyguard. This superpower has a power cost of 0 and states that when Rocket is the target of an attack and is within range 1 of an allied Groot, the allied Groot becomes the target of the attack regardless of range or line of sight. So, it is basically a very specific version of bodyguard that can only be used with Rocket and Groot. As we saw in the Groot character summary (here), Groot has got bags of stamina and inbuilt healing, and so using him to defend Rocket’s attacks is a nice thing to be able to pull off. It does mean they have to be within range 1 of each other, which is very close indeed, but I suppose you don’t really want to risk Rocket being out on his own as this would leave him super-vulnerable to attacks. The question now is is it ever worth playing Rocket without Groot? Maybe if there is something very specific you want him to accomplish and you are also running a Captain America or Okoye who could bodyguard for him. Regardless, having Rocket and Groot together on the board is going to look great, and their synergy is fun and thematic.

Rocket’s third and final superpower is an innate one called Small Stature. This states simply that Rocket always benefits from cover. As a reminder, when modifying dice cover allows the defending character to change 1 of their defence dice to a block. This is going to be really valuable for keeping Rocket alive a little longer, but be warned – Rocket will not get cover if the attack targeting him explicitly states that the target character does not benefit from cover, something to bear in mind as there are a few attacks of this nature in the game already. Also, as cover is dice modification, anything that prevents modification can be used to deny Rocket cover (looking at you Venom).

INJURED SIDE – No change on Rocket’s injured side, at least he doesn’t get any weaker!

SUMMARY – Rocket is a really interesting character. Low threat, low stamina, low defences, but strong and high-ranged attacks and the ability to damage passers-by. He will be a really interesting character to have on the battlefield, and teaming him up with Groot is going to be loads of fun. It will take some planning to ensure that Rocket is in range for his attacks but also close enough to Groot to benefit from his protection, but it could be fun jumping him around between Groot and Cap/Okoye if you end up running such a team. He is very squishy indeed, but it will be interesting to see how easily (or not) he can be taken out. Throwing him/throwing things at him will be key, as the Groot defence can only be triggered when Rocket becomes the target of an attack, which the vast majority of throws in the game aren’t.

As a listed Guardian of the Galaxy member he makes sense in that affiliation, the rerolls granted will be great for ensuring damage on his ranged attacks get through, but also for giving protection on his defences and any dodge rolls he may have to undertake. An Avengers affiliation would give him a discount on his Booby Traps superpower, reducing the cost to 2 but that is all. Cabal could be good as his 5 range attacks will almost certainly be throwing out attack damage, thereby generating the power needed for his traps. Wakandan rerolls are always magnificent and will help keep him alive should the unthinkable happen and he actually has to try and defend an attack or do a dodge roll. Lastly, Asgard could be good as it would allow him to remove a damage (i.e. 33.3% of his total stamina – that is all the dice maths that you will ever get from me), or ditch a special condition that is hampering him.

We can’t talk about Rocket without talking about the magnificence that is the Deadly Duo team tactics card. If it is Rocket’s activation and he is within range 2 of an allied Groot (and why wouldn’t he be?!) Then they can both spend 2 power. Rocket gets to perform up to 3 Plasma Rifle attacks that must each target a different enemy character. This card has a bit of a Wakanda Forever vibe, and we all know how powerful that card is don’t we?! Rocket basically gets a turn and a half worth of attacks for free. If he is in position and doesn’t move at all in his activation he could pull off 5 attacks back to back, all at range 5! That’s insane! Talk about going down in a blaze of glory!

If running an allied Groot (which, let’s face it, you probably are) then playing We are Groot on Rocket would allow the removal of 2 damage which is a nice way of keeping him alive. This is an active card though, so couldn’t be used in response to an incoming attack, so plan ahead.

Keeping Rocket alive is going to be a big deal considering how squishy he is, so to that effect cards like Escort to Safety, Lethal Protector (if running Venom), and Sacrifice would be worthy of consideration. Also any healing cards such as Field Dressing, and Patch Up.

As Rocket is more often than not going to be near a character like Groot or Cap, any card that combo’s off characters being in proximity could be good. I am thinking Disarm which reduces an enemy characters attack dice, and the classic One-Two Punch which could add dice to Rocket’s attack roll. Speaking of adding dice, if performing a move action then Battle Lust could be good as it would add a dice to Rocket’s attack pool and push the target short if damage is dealt, a nice bit of control. Inspiring Monologue (wahey!) would allow Rocket to reroll defence dice if need be, and should the worst happen and Rocket gets k.o’d or dazed then Seeing Red would allow you to get a free attack out of it (and Winter Soldier would get an attack from his Got Your Back superpower too).

Lastly, as throwing Rocket and throwing things at Rocket is going to be an effective way of getting around his Groot defence, Brace for Impact is an important card to consider to negate collision damage.

So, what do you make of Rocket?  Will he make your roster? Comment below!