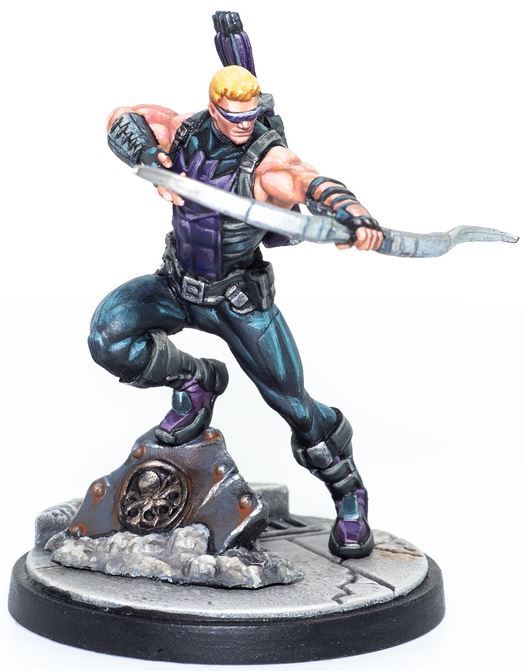 Thanks to AMG the Hawkeye character card is out there in the vast wild, and a select few across the world have their hands on the character pack. Without any further rambling from me let’s see what the purple projectile man brings to the game (apart from really massive thighs of course).

STAMINA – Clintonio’s stamina is 4, a concerning number because 4 is not 5, nor is it 6. But considering he is a powerless human I suppose it is fair enough. But that doesn’t man we have to like it!

MOVEMENT – Medium. Entirely average and there is not much more to say on this subject. Moving on!

THREAT – 3, which is very nice for list building. Although the official affiliation card has not been added to the AMG website it has been confirmed that Hawkeye is Avengers affiliated. Currently Iron Man is the only 3 threat cost Avengers character, so to have another one thrown into the mix is very welcome indeed.

DEFENCES – For an average 3 threat character we would normally expect to see a defence lineup of 3’s across the board, however this is not the case with Hawkeye. He has a surprisingly high physical defence of 4, and a lower defence of 2 for both energy and mystic. Concerning considering how many energy and mystic attacks are now present in the game. Still, perhaps he has some abilities to counter these lower defences.

ATTACKS – Hawkeye has but 1 attack and, unsurprisingly, it involves arrows. Arrow Shot is a physical attack with a range of 5, strength of 5 and power cost of 0. After the attack resolves Clint gains power equal to the damage dealt. Also, in a somewhat Ultronian vein, before Hawkeye chooses a target for this attack he can choose whether this attack type is physical or energy; a nice bit of flexibility and very handy in a tight spot I imagine. Roll a wild and you will get to trigger Full Quiver which states that after the attack is resolved the defending character gains the Bleed, Shock, Slow or Poison special condition. This is glorious. Having this ability on an attack that costs 0 power is pretty nuts (compare this to Star-Lord’s Element Gun attack which, although it rolls 2 more dice, costs 3 power and is only range 4). With this attack Hawkeye has the potential to get the special condition you want onto the target you want for no power cost, amazing. Fire this off as much as you possibly can!

SUPERPOWERS – Clint’s first superpower is an active one called Hook Arrow, which has a power cost of 2. This superpower allows Clint to be placed within range 3 of his current position once per turn. So, not only can Hawkeye throw out spcial conditions left, right and centre, he can also hop about all over the board to get into position to do it! Imagine only paying 1 for this in an Avengers affialition – you can trigger it each round and then fire off 2 attacks. Drool!

Superpower number 2 is another active one and is called Trick Shot. This superpower has a power cost of 1 (so no reduction from an Avengers affiliation unfortunately) and states that the next Arrow Shot attack that Clint makes ignores line of sight and the defending character does not benefit from cover. Note that there is no restriction on this other than that this applies to the next Arrow Shot attack which Hawkeye makes, meaning you can use this superpower at the end of your turn which ties in nicely with…

Superpower number 3, which is a reactive superpower called Fast Draw which has a power cost of 2. This superpower states that when Hawkeye is targeted by an attack, if the attacker is not within range 3 of Hawkeye, then Hawkeye may immediately make an Arrow Shot attack targeting the attacking character. This superpower is so cheap and synergises amazingly with Trick Shot. As mentioned earlier, you can use Trick Shot at the end of your turn, and then the next time Clint is targeted by an attack outside of range 3 PING – Clint can fire off his attack ignoring line of sight and cover. And all for a trifling amount of power too. Even without Trick Shot this is a very nice superpower indeed, offering Hawkeye some protection from ranged attacks as your opponent will (hopefully) be offput somewhat from attacking Hawkeye in fear of this response.

INJURED SIDE – Once injured Hawkeye’s stamina goes up from 4 to 5, very nice to see indeed.

SUMMARY – Hawkeye is a really interesting character and I am very much looking forward to trying him out. I like that he only has 1 attack, he knows what he does and he does it well. I really like that you get to choose which special condition your target gets, and the fact that Trick Shot carries over so it can be used in conjunction with Fast Draw is top banana. Plus, I do love it when I get to teleport characters around the battlefield! And best of all, his superpowers are all super cheap. What’s not to love?!

When it comes to affiliations, as mentioned earlier, Hawkeye is an Avenger and so he gets that oh so lovely superpower discount. His superpowers are cheap enough already, but discount?! I’ll take it! He fits right into an Avengers affiliation. Tick.

His attack has a strength of 5 so it will do damage fairly frequently, and Fast Draw allows him additional out of turn attacks, so he could work in a Cabal affiliation. Putting special conditions onto characters plays nicely into Cabal as the conditions which Arrow Shot grants access to work nicely with what Cabal wants to do, especially Slow which means your allied characters won’t have to move as far to do their damage.

A Wakandan affiliation would be good as it would allow Hawkeye to reroll on his attacks, increasing his chances of getting that crucial wild; and also smoothing out his defences, meaning that he gets to stick around on the battlefield a bit longer (hopefully).

Asgard could also be a good affiliation as it would allow Hawkeye to remove a damage each round, counteracting his low stamina and weaker energy and mystic defences somewhat.

Like Wakanda, a Guardians of the Galaxy affiliation would grant access to those lovely rerolls, very handy when you really need to keep him around or get his attacks/special conditions through.

When it comes to team tactics cards Clint has a personal one called Professionals. This card states that Clinton Barton and Natasha Romanoff may both spend 2 power each to play it. If they do so then, if Clint damages a character with an attack this round and Natasha is within range 2 of the damaged character, you may move one asset or civilian token from the damaged character to Natasha (respecting the limits specfied on the crisis card). This is a great card to have in game, although it seems like it will take some setup to get off. There is currently no other way to steal an objective from someone else without hurting them until they are dazed or K.O’d, whereupon they will drop it. This card is a nice tool in the kit and is a nice thematic representation of Hawkeye and Black Widow’s teamwork. Bear in mind, though, that this card does not cover every objective, some are classed as targets of opportunity, which cannot be taken by this card, only asset or civilian tokens can.

As an Avenger Hawkeye will have access to Avengers Assemble and Second Wind, allowing a bit of movement and healing as and when required.

For non-character or affiliation specific cards there are a few which spring to mind. Anything which adds dice to Hawkeye’s 5 attack dice will increase the chances of a wild being rolled, allowing you to place those special conditions more often. So a card like One-Two Punch which adds 2 dice for the cost of 2 power shared between 2 characters within range 2 of each other could be great. Also, Hawkeye could be a fun target for Doomed Prophecy which, although it causes him to lose his physical defences for the rest of the game, would mean he would get to roll 9 dice each time he fires off his Arrow Shot attack for the rest of his activation. For some ways to protect your doomed character you can read through this article here. Heavy Firepower is a card which comes with the Hawkeye/Agent Widow pack and allows a character to spend 2 power during its activation. The next attack made by this character which targets an enemy outside of range 3 of any allied character adds 2 dice to the attack roll. This has a nice synergy with Hawkeye’s Hook Arrow superpower, as Hawkeye can get himself into position before using Heavy Firepower to gain those extra dice. Also, the Inspiring Monologue staple Battle Lust would allow Hawkeye to pay 2 power to add 2 dice to an attack action undertaken straight after a move action, plus if the attack deals damage you get to push the target character away short.

Although Hawkeye has built-in out of turn movement, any additional movement he can gain would be beneficial as it would allow him to focus on double attacking, meaning he can get more special conditions out. As such he could be a good target for cards like A.I.M Lackeys (if running an allied M.O.D.O.K) which would allow an additional move action during his next activation, Drop Off (if running an allied character with the Flight superpower), and Tactical Analysis which would allow a short advance.

Lastly, if you are running Hawkeye without any protection such as Bodyguard (Captain America and Okoye), then it would be worth considering some of the cards that allow healing such as Patch Up, Field Dressing and the new Medpack which allows a character to spend 2 power to remove 3 damage from itself or a non-dazed allied character within range 2 of it. Nice!

So, what do you make of Hawkeye?  Will he make your roster? Comment below!