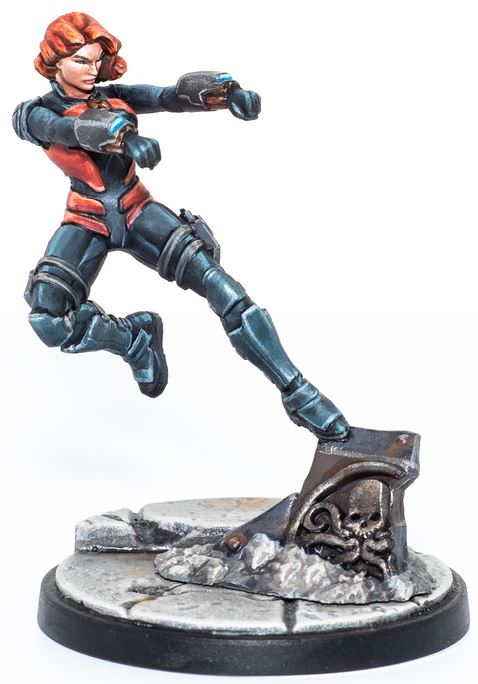 Well, here we have it – our first repeat character in the game. There has been some confusion as Core Set Widow is named Romanova and this version is Romanoff, but AMG have confirmed that they are one and the same character, so no running them both in a single affiliation! So, how does Agent Widow differ to Core Widow? Let’s see.

STAMINA – Rejoice, for Widow’s stamina has increased from 4 to 5. That 1 point on either side of the card can make a big difference.

MOVEMENT – Alas, ’tis a woeful day indeed when movement is reduced from long to medium. Let us shed a single solitary tear for what might have been and move on.

THREAT – Nat’s threat is up to 3, an indication of tasty things to come?

DEFENCES – Nat’s defensive lineup has changed from 3 2 4 to 4 3 3 for physical, energy and mystic respectively. It is nice to see Nat being a bit more robust against physical and energy attacks, as these are the most common attack types in the game currently. This, coupled with her 5 stamina, means she should have decent survivability.

ATTACKS – Agent Widow has 3 attacks, the first of which is a physical attack called Automatic Pistol. This attack has a range of 3, strength of 4 and power cost of 0. After this attack resolves Black Widow gains 1 power. This attack also has an ability called Rapid Fire which does not require a wild to trigger. This ability states that after this atack is resolved Widow may make one additional Automatic Pistol attack which must target the original target character. So basically a 2-for-1 attack against the same target. This is nice, as a strength of 4 is not the strongest basic attack we have seen on a character. Range 3 is no slouch, and this is a good attack for chipping away at an enemy character. 2 attacks for the price of 1? We’ll take it! This has potential to be great in a Cabal affilaition, but more on that later.

Attack number 2 is another physical attack, this time called Tear Gas. This attack has a range of A2, strength of 4 and power cost of 2. How nice to see an area attack on a 3 threat character. So far our only area attacks have been on the Ultron Ultimate Encounter (doesn’t count!) and Thor who is 5 threat. But hark, this attack also has rules text! The target character does not gain power for damage dealt by this attack, and after the attack is resolved the target character gains the Poison special condition (the character loses 1 power during the power phase). 2 power is pretty cheap and even though this attack only rolls 4 dice it seems like any damage this attack causes is just a bonus, it is the denial of power and application of the Poison special condition which I find most interesting for this attack, and it gets better if you can hit 2 or 3 enemy characters rather than just 1. Especially when you take into account…

Widow’s Kiss which is an energy attack with a range of 2, strength of 6 and power cost of 3. When using this attack you get to add 1 die to the attack roll for each special condition which the target character has. Roll a wild and you will get to trigger Push which, unsurprisingly, allows you to push the target character away short before damage is dealt. Given how many characters we have in the character pool that can deal out special conditions this attack is a pretty big deal. It is quite cheap for a bigger attack and is a nice way of getting extra dice on a Tear Gas attack. It synergises nicely with Hawkeye (his character summary can be found here) who wants to sit back and pump out special conditions, Proxima Midnight who has 1 attack that throws out no less than 3 special conditions (more here) and Star-Lord who has the potential to be a special condition machine (more here), not to mention the many other characters who have 1 or 2 attacks that deal out Bleed and the like. And the push is just a bonus!

SUPERPOWERS – Nat’s first superpower is a reactive one called Interrogate which has a power cost of 3. This superpower states that at the start of the Cleanup Phase if Nat is within range 2 of 1 or more dazed enemy characters then her controlling player may increase the amount of victory points they score from crisis cards during the cleanup phase by 1. Which is a long-winded and rulesy way of saying “pay 3 power for 2 VP if she is within range 2 of 1 or more dazed enemy characters at the start of the cleanup phase.” Well, this is new. Scoring VP’s outside of the usual objective conditions is rare, with Killmonger’s Usurp the Throne the only current way to do so. But no longer! This is something which you and your opponent are going to have to be keenly aware of whenever Widow is on the table. Unless the game is really going in your favour you are unlikely to be able to score a VP every round, as nice as that would be, but any VP advantage you can get is not something to turn ones nose up at. Note that this would not benefit from the Avengers affiliation discount as this superpower is not triggered during Black Widow’s turn. The down side is that if Widow ends the round next to a dazed character then she is at risk at that character is probably powered up and ready to do some damage at the start of the next round. Not an issue if you have priority as you can move Nat out of the way on turn 1, but something to be aware of should you be blinded by VP lust.

Nat’s next superpower is another reactive one and is called Parting Shot. This superpower costs 2 power and states that after an attack targeting Widow is resolved the atacking character suffers 1 damage and Nat may move away from the attacking character short. This superpower is a nice way of mitigating some of the risk involved in getting Nat in close to score VP’s from her Interrogate superpower and do her shorter range attacks, and adds a nice bit of mobility to Nat to counter the loss we feel at now only being able to move her medium rather than long.

Last of all Nat has the innate superpower Stealth which states that characters must be within range 3 of Widow to target her with attacks. We have seen how useful (and frustrating for your opponent) this ability can be, and it is very nice to see it repeated on Widow 2’s card here; it gives her a nice bit of protection from the many ranged characters which have been released over the past few month.

INJURED SIDE – No change on her flip side other than she gets very angry looking.

SUMMARY – I really like the look of Agent Widow. She feels totally different to her core set counterpart, but still feels thematically on point. Obviously, being able to score VP’s outside of the usual ways of doing so is pretty huge, and it is an interesting design space to explore in the game. I love that her basic attack automatically triggers twice, that she has a nice little area attack that denies power gain to the target, and I love that she gets additional dice on her big attack based on special conditions. This synergises so nicely with so many different characters, and will only improve as more characters are released. This version of Nat really feels like she wants to get in close, do her thing and then get out of there. Great!

The only benefit of running Nat in an Avengers affiliation (she is a listed Avenger) is that you will get to trigger Parting Shot for a mere 1 power, pretty amazing considering you’re guaranteed 1 power each round! She would also benefit from the Avengers-specific team tactics cards Avengers Assemble, which allows you to pay 1 power to move her short, a very handy way of getting her out of danger, and Second Wind which allows her to spend 1 power to remove the Stun special condition and 1 damage, nice for a little extra longevity.

Nat also fits nicely into a Cabal affiliation because of her attacks. Automatic Pistol fires off twice when triggered, potentially gaining you 2 power on top of any gained for damage dealt, and the Tear Gas area attack has the potential to damage multiple targets, gaining you lots more power. Very nice indeed.

The damage and special condition removal of Asgard, and the rerolls of Wakanda and Guardians of the Galaxy are also viable options to improve longevity and consistency respectively, but I think Avengers and Cabal are probably the strongest out of all the currently available affiliations.

With regards to team tactics cards beyond those already mentioned we must talk about Professionsals which states that Clinton Barton and Natasha Romanoff may both spend 2 power each to play it. If they do so then, if Clint damages a character with an attack this round and Natasha is within range 2 of the damaged character, you may move one asset or civilian token from the damaged character to Natasha (respecting the limits specfied on the crisis card). This is a great card to have in game, although it seems like it will take some setup to get off. There is currently no other way to steal an objective from someone else without hurting them until they are dazed or K.O’d, whereupon they will drop it. This card is a nice tool in the kit and is a nice thematic representation of Hawkeye and Black Widow’s teamwork. Bear in mind, though, that this card does not cover every objective, some are classed as targets of opportunity, which cannot be taken by this card, only asset or civilian tokens can. Still, if you can pull this off then it is a strong (and thematic) play.

Mission Objective plays nicely into the above. If you can get the enemies asset or civilian token onto Nat then they probably aren’t going to be too happy, especially if that token is a Wakandan Herb. As such you may want to get the token onto a character with higher defences or stamina who will be able to hold it for longer and thus deny your opponent those precious victory points, and Mission Objective allows you to do this.

Nat could also be a good target for Doomed Prophecy. Although she would lose her 4 physical defence dice for the rest of the game (hello Bodyguard), her Automatic Pistol attack would roll 8 dice twice over. You could use this attack twice during her activation, meaning it would trigger a total of 4 times. 4 8 dice attacks at range 3 is no small thing! Tear Gas would also be an 8 dice attack, and you wouldn’t have to worry about the target character gaining loads of power from incoming damage either.

Last of all Trip Up stands out as a good card to consider. This cards allows you to put the Stun and Stagger special conditions onto an enemy character, which means that when Nat attacks that character with a Widow’s Kiss attack she would get to roll 2 extra dice straight away, very nice.

So, what do you make of Agent Widow?  Will she make your roster? Comment below!