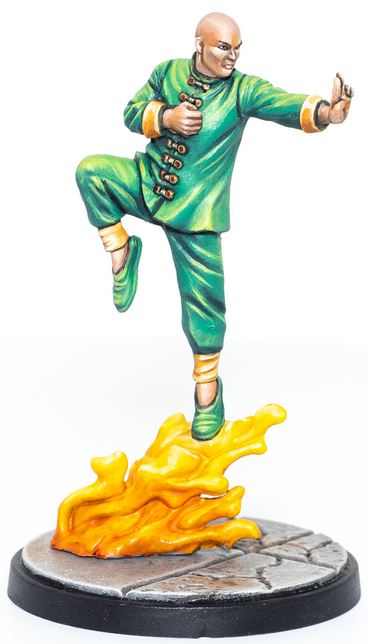 Wong is both valet and assistant to Doctor Strange.  For generations his family has served those who use mystic forces for good.  But how have AMG represented Wong in the game?  Let’s see.

STAMINA – Wong is pretty flimsy at 4 stamina, but we can’t really complain considering his threat level.

THREAT – Wong comes in with a threat of 2, putting him firmly in the Black Widow, Nebula, Okoye and Rocket camp. So far each 2 threat character has brought something different to the table than their threat level associates, so it will be interesting to see if Wong follows that trend.

DEFENCES – Wong rolls 2 dice for his physical defences, and 3 for energy and mystic respectively. For a 2 threat character that’s not actually too horrendous.

ATTACKS – Wong has but 1 attack, and if you find yourself using it then something is probably going very wrong for you as we will go on to see. But first, let’s take a peek at his Strike. This is a physical attack with a range of 2, strength of 4 and power cost of 0. After this attack resolves Wong gains 1 power. If this attack was a cheese then it would be mild cheddar because it is WEEEEAAAAAK. A 4 dice physical attack is going to be like throwing pebbles at a tank, and range 2 puts Wong dangerously close to enemy attacks that could shoot right through his low defences and stamina. But, Wong is not an attacker as we shall go on to see when we take a look at his…

SUPERPOWERS – Wong’s first superpower is active, costs 2 power and is called Faithful Assistant. This superpower states that you may choose another allied character within range 3 of Wong and give it 1 power. You can use this superpower as many times as you like, but a character can only be affected by it once per round. This is a pretty nifty way of getting additional power onto characters that need it, and being able to do it from range 3 is a decent enough distance. But it does require Wong to be sitting on a bit of a power reserve, and he only generates 1 power per round. Or does he…

Meditate is Wong’s second superpower. It is active and has a power cost of 0. As an action Wong can gain 1 power. Simple enough, and a nice way of gaining that little extra needed to pay for his abilities.

Next we have another active superpower, and this one has a power cost of 1 and is called The Vishanti’s Blessing. Again, it takes an action to use, and states that Wong or an allied character within range 3 of him removes up to 2 damage or 1 special condition; and a character can be affected by this superpower only once per round. This is like the Asgardian leadership ability in superpower form, albeit requiring an action and providing a little more healing. This superpower is really cheap and seems useful in so many circumstances. In a game would you ever say no to paying 1 power to heal 2 damage or remove a special condition?

Last up we have an innate superpower called Servant to the Sorcerer Sumpreme which states that while (personally, i’d have gone for whilst) within range 3 of an allied Doctor Strange Wong gets to add 1 die to his defence rolls. This superpower makes his defences 3, 4, 4, and that’s pretty darn good for a 2 threat character!

INJURED SIDE – No change as far as I am aware.

SUMMARY – Like a tripod, Wong is pure support, and I love it. Running Wong with Doctor Strange is both a thematic win and makes his defences pretty darn good for his threat level. Wong seems like the kind of character you could just throw into any team and he will do work. Healing is always valuable, and Wong’s superpowers are cheap and effective. And let’s not forget that Wong can share the wealth too by giving out power, just like a mini Advanced R&D. I can see him being included in many lists, but I can also see him being a top target for your opponent.

AFFILIATIONS – Wong is listed as a Defender which is a team helmed by Doctor Strange. As such this would give Wong the benefit of the defence boost from being allied with the good doctor. Wong isn’t particularly attack focused so he wouldn’t gain much benefit from the Defenders leadership ability, except in those occasions where he ends up perfectly positioned for a hit, or if you want him to go down all guns blazing; or if you just want to fire off an attack assuming it will miss just so you can gain that 1 power.

A Web Warriors affiliation could be fine as it would grant Wong access to defensive rerolls, and if he was holding or contesting an objective he would be able to reroll or modify critical failures, if he had access to a reroll ability, say from Shuri for example. And Web Warriors characters aren’t particularly high stamina or defensive (except Venom), and so having Wong in to provide a bit of healing would add nicely to their longevity.

Spider-Foes I don’t think would make a lot of sense as their leadership ability is focused around attacking, which is not something that Wong is overly interested in, and I am sure he would rather save his 1 power for some healing or to power up an ally. However, we don’t know what a lot of the other Spider-Foe characters do yet, so maybe there will be a place for Wong on a Spider-Foes team once we get more releases revealed.

An Avengers team would only discount Wong’s Faitful Assistant superpower, meaning he would be paying 1 power to give 1 power to another character. Pretty cheap, but the Avengers team is already pushed for space for unaffiliated characters, and Avengers characters are already quite defensive so I don’t think they really need much healing. That’s just my opinion which could be complete nonsense, and if you want to run Wong in an Avengers team far be it from me to stop you.

Cabal and Black Order are not good affiliations for Wong from a leadership ability point of view, I don’t think, as they are so focused on dealing out damage. But, Wong can pretty much slot into any team as a cheap support character, so if you feel like your team needs a bit of healing then go for it. This would make Black Order characters insanely resilient, but because the Black Order team tends to have quite a low model count getting Wong into position to heal or dole out power could be tricky.

Wakandan/Guardians of the Galaxy would add more consistency to Wong’s attacks and defences, and I am sure a character like Rocket Raccoon would appreciate some tasty healing every now and then, and Shuri would give Wong some nice reroll access.

An Asgardian affiliation would double down on the healing and special condition removal, and giving out additional power to fuel a more powerful character like Thor could be interesting. I think I’ll give Wong a try in Asgard and see how he fares.

TEAM TACTICS CARDS – There are 3 team tactics cards which come with Doctor Strange and Wong, 1 of which is Wong-specific. Pentagram of Farallah is a Defenders affiliated reactive card which either Wong or Doctor Strange can play if they pay 2 power. If either does so then they place a Mystic Portal token within range 1 of them, and a second token within range 5 of them. Then, at any time during a characters activation they can spend 1 power once per turn whilst within range 1 of a Mystic Portal to be placed within range 1 of the other mystic portal. Pretty amazing – it’s like Black Order’s Mothership, but not quite as epic in terms of distance travelled. Note that there is no restriction on the characters that can use the portals, so your opponents characters can take advantage of them too. Still, in the right situation this is a powerful play – it’ll get you across to your opponents gamma shelter nicely. Plus, you’ll feel like a badass jumping your characters acros the board.

As for other team tactics cards, A.I.M Lackeys if running an allied M.O.D.O.K, or Tactical Analysis if not both grant an additional move, which could be used to get Wong out of harms way, or to get him into position to throw out some healing or power where it is needed.

As it seems Wong is going to be a top target for your opponent to hit, running Disarm might be a good call, as for the mere cost of 1 power off 2 characters you can make an enemy character roll 2 fewer attack dice for a round; a nice bit of protection for Wong. Escort to Safety could also be a good call, getting Wong out of the way of some incoming damage.

Field Dressing is already a powerful card, and Wong, or another character, could pay to remove the dazed token and 1 damage from the target character, then Wong could heal 2 off the character. Pretty powerful stuff.

Running Inspiring Monologue (wahey) and getting an allied character to pay for it and target Wong could be good, as it would allow defensive rerolls for Wong for a whole round, no bad thing.

Also, running Heavy Firepower for Wong’s allies so they can take damage to reduce the cost of an attack could be good, as Wong will be in place to just heal them back up again.

Lastly, Seeing Red could also be a good one to run. It is likely that Wong will get taken out due to his low stamina and somewhat poor defences, so being able to pay 3 power off an ally to get an out of activation attack off could be very nice indeed.