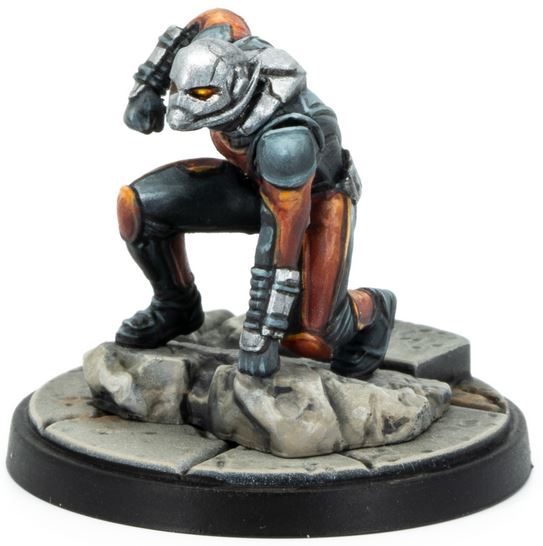 Is it time for Hank Pym?  No, it’s Scott Lang o’clock!  We’ve seen what Wasp can do, now let’s see what Old Langy brings to the table!

STAMINA – 5 stamina puts Scott in with Janet – not super flimsy, but not super hardy either.

MOVEMENT – When in normal mode Scott moves medium, but once tiny he is restricted to short movement only – booooooooo!

SIZE – Scott is a respectable size 2 when of normal size, but when tiny he becomes an unsurprising size 1.

THREAT – Just like Wasp, Ant-Man is threat 3.  I am pretty sure that AMG will list him as an Avenger, so it is most welcome to have another affiliated 3-pointer along with Hawkeye and, dare I say it, Iron Man, as well as Wasp.

DEFENCES – Whatever size you find Scott to be in he has the same defensive lineup, namely 3 physical, 2 energy and 3 mystic.  Not super strong, and that 2 energy hurts.  Let’s hope for some defensive superpowers!

ATTACKS – When normal in size Ant-Man has a basic attack called Pym Particle Punch which is a physical attack with a range of 2, strength of 4 and power cost of 0.  As usual, after this attack is resolved power equal to the damage dealt is earned.  Additionally, after this attack is resolved Scott may transform into his tiny size.  If he does transform he drops all objective tokens he is holding.  4 strength is weak, that 1 fewer die on a basic attack really does hurt.  I do like that you have the option to transform and that this is not mandatory.  And best of all, now we have an option to drop an objective on demand.

If you decide to stay in normal form you also get access to Bullet Ant Barrage, a range B3 physical attack with a strength of 7 and power cost of 4.  If this attack deals damage, after this attack is resolved the target character gains the Poison and Stun special conditions.  Beam attack – yay!  The special conditions applied also play havoc with the target characters power economy, nifty. This is a really strong beam attack, and not something which your opponent is going to want to get in the way of. Unless they want to get nibbled to death by ants if course!

If you opt for tiny form however, you get access to a physical attack called Ant-Sized Uppercut which has a range of 1, strength of 6 and power cost of 0.  After this attack is resolved Scott gains power equal to the damage dealt.  Then, after the attack resolves Scott transforms into his normal size.  Range 1?!  BOOOOOOOOO!  Still, this is a powerful attack for 0 power, so if you are in a position to use it, why not?!

SUPERPOWERS – Whether in tiny or normal form, Ant-Man has the active Change Size superpower which, for 1 power, allows Scott to change into his other size.  As before, he drops all objective tokens he is holding.  Handy for additional mobility and to get setup for your next turn.

In normal size Scott also has a reactive superpower called Pym Particle Control which costs 1 power.  This superpower states that when Scott is targeted by an enemy attack or would suffer a collision he may drop all objectives he is holding, then transforms into his tiny form before the attack or collision continues.  Very handy for getting a bit of cover, as being size 1 means that Scott can hop behind any terrain and modify 1 of his defence die to a shield, and very handy for getting access to his superpowers when in tiny size.  Speaking of which…

Ant-Man, when in tiny form, can use the reactive superpower Hitch a Ride which costs the princely sum of 0 power.  This superpower allows him to place himself within range 3 of his current position once per turn.  A range 3 place.  For free.  That’s huge.  HUGE!  Perfect for setting up for an Ant-Sized Uppercut attack, negating some of the drawbacks of having to move into range 1 of the target. Also perfect for getting the heck out if the way of a big enemy, or getting into position to trigger some team tactics cards.

Next up we have 2 innate superpowers – Stealth which states that characters must be within range 3 to target Ant-Man, and Tiny Superhero which states that Scott may reroll any number of defence or dodge dice, and cannot hold objective tokens.  Stealth is a nice way of adding a little protection to Ant-Man, compensating for his not-spectacular defences, and rerolling any number of defence dice is a win.

INJURED SIDE – No changes from what I can tell.

SUMMARY – Ant-Man strikes me as a character who is really going to take some regular playing to figure out.  He is mobile for sure, like Wasp (although that short move whilst tiny hurts the soul), and his attacks are, for the most part, strong, especially quen you consider his threat level; and all his superpowers are really cheap.  Like Wasp, I think that knowing when to change size is going to be key to getting the most out of him.

AFFILIATIONS – I suspect that Ant-Man will be Avengers affiliated, although I believe that we are still awaiting confirmation of this from AMG.  Ant-Man gains no benefit whatsoever from the Avengers leadership ability, as all his superpowers are either free or only cost 1 power.  But, having an Avenger who is extremely mobile, hits above his weight and can dump objectives near his allies could be no bad thing.

Cabal could be a fun team to run Ant-Man with.  He has a very strong beam attack in Bullet Ant Barrage and Ant-Sized Uppercut is a powerful basic attack, both of which would add to his power gain from the Cabal affiliation ability.  Couple this with Scott’s extremely cheap superpowers and you’re onto a winner.

Rerolls from a Wakandan team would add some consistency to Ant-Man’s defences, but I honestly think your 1 power would be better spent getting into tiny form so you get cover and rerolls of all defence or dodge die anyway.  Then again, you could use Ant-Man to drop some objectives near your other Wakandan characters to add to their ability to spread quite wide across the battlefield.

An Asgard affiliation would allow removal of special conditions and damage throughout the course of the game, which adds to Ant-Man’s longevity, and he ties in nicely with Asgard’s ability to hit hard.  He does bring mobility and low threat to the Asgardian team, which are things they sorely lack.  Again, dropping objectives close to a Thor or Hela for them to pick up could be great – something I would very much like to try.

Guardians of the Galaxy could also be fun for Ant-Man.  Rerolls on each beam attack anyone?

Although Ant-Man hits hard, he doesn’t still me as being really kill focused, so Black Order may not be the best affiliation for him.  The Black Order team is already pushed for space threat-wise as it is.  But then again, every bit if damage helps, and if you have a low model count then running At-Man as a cheap mobile character who can do some damage could be good.  Did I just talk myself into this?

Web Warriors could be great for Ant-Man, giving him access to further rerolls on top of those he already has and even allowing him to modify and reroll critical failures. He also plays nicely into the Web Warriors gameplan of “move quick.” And as an added bonus, Ghost-Spider could use her Life Saver ability to pull him our of the way of enemy attacks,

A Spider-Foes team would allow Ant-Man to (hopefully) get a bit more damage through by rerolling an opponents defence die, but I don’t think this is the strongest leadershipability to use with Ant-Man.

Ant-Man could be a strong character in a Defenders team (but then couldn’t anyone). As previously discussed, he hits above his weight. Being able to take that and then change the type of each of his attacks is pretty mega. An energy or mystic Bullet Ant Barrage anyone?

As for more readily available team tactics cards, Advanced R&D could be good as it would allow you to give more power to Ant-Man, which would let him do all the things because his superpowers are so cheap.

Battle Lust could be fun and versatile, allowing additional dice to be added to an attack undertaken after a move based on Ant-Man’s current size. Plus it would give the target character a short push if damage was dealt.

Just like Wasp I think Ant-Man could use Disarm to good effect. As he is so mobile, he could zip up to an ally in need, trigger Disarm and then an enemy character rolls 2 fewer attack dice for the rest of the round. Very handy in a pinch! Along a similar vein is One-Two Punch – you could get Scott into position so that a nearby ally now gets to attack with 2 additional dice. Also Trip Up which allows the target character to be given the Stun and Stagger special conditions if damage from an attack is dealt – again, use Ant-Man’s mobility to get him into position to pay for these cards.

Face Me could also be fun. 3 power could be a bit of a stretch, but getting an enemy character within range 4 to advance its speed then make an attack could be good. Ideally they wouldn’t be able to attack anyone, but maybe they end up close enough to attack Scott but then PING, he’s tiny and now has Stealth, defensive rerolls and cover.

Lastly, Heave Ho could be good fun too. Due to Ant-Man’s mobility he can nip next to a character and they can both pay 1 power to throw a nearby terrain feature medium. Lovely stuff.