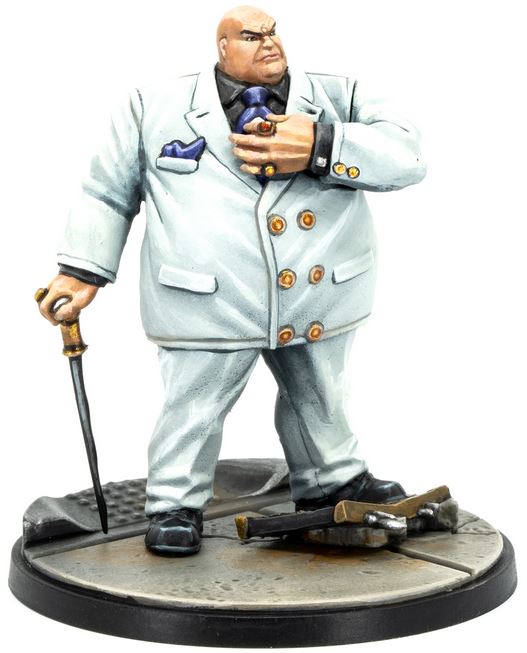 Even bigger than Will Smith’s late 90’s album “Big Willy Style”, Big Willy himself himself is almost here. So, what does the Kingpin of Crime bring to the table? Let’s see.

STAMINA – Fisk comes swinging straight out of the gate with a whopping 7 stamina. Big money for a big guy!

MOVEMENT – Alas and alack Willy only moves short, but given that he is on a 50mm (medium) base this is not as bad as it could have been .

SIZE – Fisk is a big guy, so he is aptly size 3 in the game. This gives him a little protection from more basic throws that can only target size 2 characters which is nice.

THREAT – 4, so hopefully he’ll be doing some work on the battlefield for us.

DEFENCES – Wilson has a decent defensive lineup of 4, 3, 3. Let’s hope he has some defensive abilities to.

ATTACKS – Wilson has 3 attacks, the first of which is a physical attack called Headbutt. This attack has a range of 2, strength of 5 and power cost of 0. As usual, after this attack is resolved power equal to the damage dealt is gained. Roll a wild and you can trigger both Stun to give the target character the Stun special condition, and Push which allows you to push the target character away short as long as it is size 3 or less. A very nifty basic attack with good bonuses – Stun is a nifty way of giving the enemy a bit of power denial, and an optional push is always welcome.

Next up is an energy attack called Cane Laser. Yes, Cane Laser. This attack has a range of B3, strength of 4 and power cost of 0. Strength 4 is pretty weak, but a beam attack is always fun and range 3 is decent enough. The good best thing about this attack is that it ignores line of sight and the defending character does not benefit from cover, so this is good for attacking through terrain.

Last we have a physical attack called Hail to the King which has a range of 2, strength of 7 and power cost of 3. Before damage is dealt the target character may be thrown short, and after the attack resolves the target character gains the Stagger special condition. Stagger is a gittish condition to be on the receiving end of (a staggered character has to shake stagger at the start of its activation), but is a joy to give out. Range 2 hurts, but an automatic throw is very nice indeed. This is a solid enough attack, no complaints here.

LEADERSHIP ABILITY – Kingpin brings with him a new affiliation called Illicit Network which is the leadership ability for the Criminal Syndicate affiliation. Now prepare for all the words – once per turn during an allied characters activation it may spend 2 power to move 1 asset or civilian token being held by the active character to another allied character within range 3. A character cannot hold more tokens than the crisis allows. Nifty for keeping hold of scoring objectives and denying them to your opponent, but I think that the second part of the ability is stronger – each allied healthy character contesting an objective token counts as 2 healthy characters when determining who is securing the objective token. This just makes it harder for your opponent to score those secures. It seems the Criminal Syndicate are all about controlling the objectives, which is a nice addition to the game. I’m looking forward to seeing how they play once the relevant characters are release, speaking of which the current lineup for the Criminal Syndicate team is Kingpin, Bullseye, Taskmaster, Black Cat, Crossbones, M.O.D.O.K, Killmonger, Green Goblin and Mysterio (yay).

SUPERPOWERS – Big Willy has but 3 superpowers, the first of which is an active superpower called Street-Level Negotiations which costs 2 power. This allows Fisk to throw an enemy character or piece of terrain that is size 3 or less within range 2 medium. This is a very decent throw indeed, medium is no slouch, the power cost is decent, and size 3 enemy or terrain is nice and flexible.

Next up we have an active superpower called Intense Physical Conditioning which costs 1 power. If Fisk would suffer damage he can use this superpower to reduce the amount of damage suffered by 1. This takes us back to the glory days of the core set and Crossbones Inured to Pain ability, very nice for counteracting his weaker defences.

Last is an innate superpower called Solid Frame which states that Fisk does not suffer damage from collisions with other characters. This is a pretty big deal – throws are a big part of MCP, and the fact that Fisk can just ignore collision damage entirely is huge.

INJURED SIDE – No change as far as I can tell.

SUMMARY – I like the sound of the Criminal Syndicate affiliation ability, and am looking forward to seeing how the team comes together. Fisk seems like a solid character with general all-round goodness. I look forward to getting him on the table.

AFFILIATIONS – Fisk makes sense in a Criminal Syndicate affiliation, after all, he is the leader. He has a few abilities to shift characters off of objectives as required, and with his ability to ignore throw damage and reduce incoming damage, as well as high stamina, he has decent longevity.

I don’t think Fisk stands out in an Avengers list really, as there are already plenty of in-affiliation options and there is no great benefit from Cap’s superpower discount.

Cabal could be fine enough I think, Fisk will be putting out some damage at least and so will be able to generate power to pay for his throw and damage reduction, as well as his big attack.

I don’t think there is any great benefit to the rerolls granted by a Wakanda or Guardians of the Galaxy team, other than the improved consistency of course.

An Asgard team would add to Kingpin’s longevity but it seems like he is already quite durable thanks to his abilities. Plus, Asgard is already pushed for space threat-wise and with characters like Angela coming out (I haven’t got her already, I swear) there are probably better options than Fisk.

I don’ think Fisk really needs the defence die reroll benefit of a Web Warriors team, but a reroll of critical failure results when contesting objectives would be handy. Still, probably not the most synergistic team to run him in.

As an affiliated Spider-Foes character Fisk gets fits into the team nicely, and the ability to spend a power to reroll an opponents defence die is nice, but really I suspect Fisk will be mostly wanting to save his power for his abilities.

Lastly we have the Defenders affiliation. Fisk already has access to physical and energy attacks, but being able to spend a power to switch to mystic could be good, and dole out the Hex special condition (the character does not get to add dice for critical hits in their attack, defence or dodge rolls). But still, maybe not the best. Sticking with Criminal Syndicate or Spider-Foes seems to be the way to go.

TEAM TACTICS CARDS – Fisk comes with a trilogy of team tactics cards, namely All According to Plan, Hired Muscle and Shadow Organisation. All According to Plan has been lovingly revealed by AMG, and has bee shown to be a Criminal Syndicate affiliated reactive card. It states that during the power phase any number of allied Criminal Syndicate characters may spend power to play it. If 10 or more power was spent to play the card then you get to take the priority token. Well, I guess you could pay 5 power to play the card and do nothing, or pay more than 10 power if you are feeling devil may care – both of which would be a bit silly. But, 10 power will get you the priority token. That’s a steep cost, but then again I guess you may be saving a bit of power from not having to interact with objectives as much (1 healthy character counts as 2 when contesting remember), and to be fair we have yet to see what some of the affiliated characters do in the game – maybe one ends up being a bit of a power bank.,or maybe the other team tactics cards which are as yet unspoiled help with power generation, I guess we will have to wait and see. Having priority, even for a round, could be huge and totally swing the game in your favour. You get first dibs on dazing/K.O’ing a character, robbing your opponent of an activation (or maybe a few), and perhaps you save one of your characters that would have been taken out on the first activation this round. For casual play maybe you just aren’t bothered and want to run some old favourite cards instead (like Battle Lust for example), but somewhere out there there are competitive players trembling with excitement.

Shadow Organistion has also been spoiled for us, and is another Criminal Syndicate affilaited card. It is reactive and states that during the power phase any number of allied Criminal Syndicate characters may spend 2 power. If they do so then enemy characters must be within range 2 of characters that spent power to target them with attacks this round. If used correctly this could be a very powerful play indeed. This cripples ranged attackers like Hawkeye, Rocket, Iron Man etc, and means that if they want to hurt you they have to waste an action moving. As enemy characters will have to move in close to attack (not a problem for Valkyrie), this could potentially leave them vulnerable for counter attacks during the next round, as well as leaving them open to being thrown at each other. If nothing else, this is a nice bit of dissusion for your opponent – giving your characters a bit fo protection for a round.

As Kingpin has most bases covered he would benefit from most of the generic team tactics cards that add dice to attacks and suchlike. A few less generic cards stand out as potentially being worthwhile of consideration. All You’ve Got could be good on Fisk, giving him an additional activation but then flipping his card or KO’ing him. It costs a princely 4 power but would allow him to get up into the fray, use his close range attacks, his push and throw and gain control of the objectives.

If you’re feeling saucy you could slap Doomed Prophecy onto Fisk, strip him of his physical defence dice, and then swing in with 9 and 11 dice physical attacks; utilising his damage reduction superpowers and some affiliated Bodguards perhaps.

Lastly, Face Me could play nicely into what Fisk wants to do. Spend 3 power to advance an enemy character within range 4 of him its speed then give it a free attack, which Fisk should hopefully be able to soak up with ease.