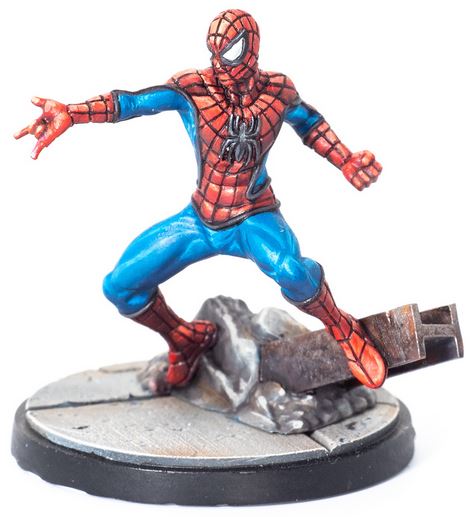 Ah Spider-Man, so many people’s favourite Aven…wait, WHAT?! HE’S NOT AN AVENGER?! DAMN! Despite being the second character in the core set not to be part of the core set affiliation (looking at you Doc Ock), he has the skills to pay the bills. What can he bring to the table? Read on.

DEFENCES – Spider-Man’s defences are consistent all the way with 3 dice rolled for each attack type.

ATTACKS – Up first we have Strike, a range 2, strength 5 attack with no power cost. As is usual with most of the core set standard strikes, Spider-Man will gain power equal to the damage dealt.

Next is Impact Webbing which is range 4, strength 4 and, again, no power cost. The way this differs from Strike is that you are guaranteed to gain 1 power after the attack resolves, regardless of whether any damage was dealt. Plus, roll a wild and you will get to push a size 2 or smaller target short before dealing damage. Great for objective control.

Spider-Man has a third strike, namely Taser Webs (thankyou so much AMG for using an S instead of a Z), a range 3, strength 6 attack with a power cost of 2. As you may expect from the attack name, if 1 or more damage was dealt then after the attack resolves the target is stunned. Never underestimate the power of stun, stopping a character from gaining more than 1 power when they would be gaining a lot more can cripple a player until they can shake the condition and swing the ame in your favour.

That’s it for attacks, let us now talk of superpowers.

SUPERPOWERS – First up we have the active superpower Web Line which costs 2 power. For this you get to push an enemy character within range 4 toward Spider-Man short. This may not sound like much, but imagine you have enemy characters sitting on objectives. Range 4 is quite a distance. You can reach over with your web line, yank a character off that obejctive towards Spider-Man, and free the ojective up for scoring with your other characters. There is a restriction to this superpower, such being that you can only push a character using this superpower once per turn. Do not read this as “you can only use this superpower once per turn”, the restriction is on the character you can push, so you can use this superpower as many times as you like on your turn, as long as you are targeting different characters each time and can pay the required power cost. Just picture the opposing player sitting pretty on an objective, then all of a sudden up comes Spider-Man and shifts everyone short. Beautiful!

Next up is the active superpower Web-a-Pult which has a cost of 3 power. This allows you to throw short a terrain feature or enemy character of size 2 or less within range 3. This is useful for objective control, as per Web Line, but also useful for getting terrain out of the way before your enemy throws it at you. Plus, who doesn’t love throwing terrain in this game?!

And last of all we have 2 innate abilities. Spider-Sense states that when Spider-Man is defending against a physical or energy attack or making a dodge roll, he may reroll two of the defence or dodge dice. Dice re-rolling is a superb innate ability to have. Hitting Spider-Man with terrain is going to be tricky! The second innate ability is Wall Crawler, meaning that Spider-Man can stick to his long movement tool when climbing over terrain up to size 5.

SUMMARY – Spider-Man seems cut out for snatching objectives, although with 5 stamina you don’t want to load him up too much with cosmic cubes. He seems ideal for swooping in, changing the board state around an objective, then swinging out to do the same at the next objective. His ability to reroll physical and energy attacks as well as dodge rolls is powerful, and no doubt he will be the bane of many players who are playing against him.

Team tactics cards-wise Drop-Off could be good as it gets Spider-Man in to the objectives quick, and get’s him a free attack when he lands as well, then he is in place for running off to the next objective. As he is such a great objective grabber and manipulator Follow Me would be good, although costly, as it will effectively force your opponent to skip a turn, allowing you to get setup and get Spider-Man in where he needs to be. As Spider-Man will likely be bouncing about the board he will regularly be in a good position to help out with some Heave Ho and get some terrain thrown medium. Mission Objective makes sense too, as Spider-Man will regularly be carrying obectives and this will allow him to pass one off to an ally if he is about to be dazed or KO’d. Last of all we have to talk about Gamma Launch – if you need to get Spider-Man across the board and you are also running Hulk this is the way to do it fast and long. Range 5 is huge and can totally swing the early rounds of play if you can launch Spider-Man at an objective straight away.

How have you found Spider-Man to be?  What cinematic moments have you had with him?  Comment below!