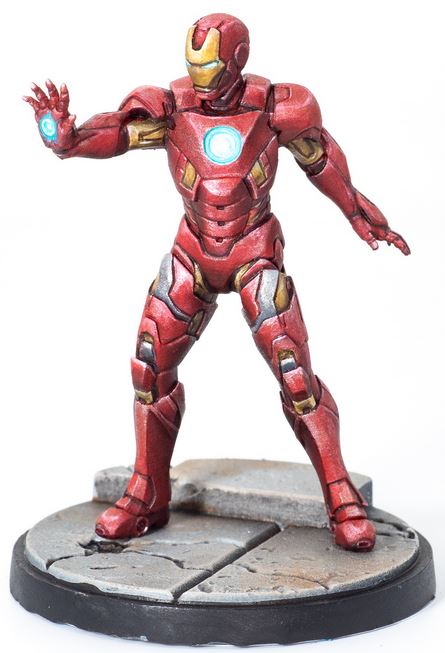 Although altogether lacking in superpowers Iron Man/Tony Stark is up there with the top tier heroes, even being part of the Illuminati (a future affiliation perhaps?). How does the genius founder of the Stark technology empire translate into the game? Let’s see.

MOVEMENT – Right slap bang in the middle at medium.

SIZE – He is human and therefore size 2.

THREAT – 3, nice. But with characters like Spider-Man being a 4 does Tony sacrifice some abilities in order to keep his threat low?

DEFENCES – As might be expected Tony rolls higher against physical attacks than energy or mystic attacks, with 4 dice against 3 and 3.

ATTACKS – I-Ronman has 2 attacks, the first of which is a strike in disguise and is called Repulsor Blast. At range 4 this attack can cover some distance, and with a strength of 4 and a cost of zero power it has the potential to do some damage. As is traditional with most standard strikes, even those in disguise, Iron Man will gain power equal to the damage dealt. A wild roll will allow you to push the target character away short, which is just super-thematic, and handy! On the face of it this may seem to be a very standard zero cost attack, but range 4 is not to be sniffed at; only a handful of other characters have a range 4 attack at zero power cost, Captain Marvel, Captain America and Spider-Man if I recall. Being able to hit enemies from the back end of the table will be great for fending off characters from nearby objectives, or for weakening characters prior to them being hit by shorter range attackers.

Next up is Homing Rockets which is a range 5, strength 5 and 2 power cost attack. RANGE 5!! FOR 2 POWER!! The opposing player better beware as soon as they field their team as Iron Man is not far off from hitting them straight away. And as if all of this wasn’t good enough there is more – this attack ignores line of sight and the defending character does not benefit from cover! If they are in range, no matter where they are, they’re getting hit. Wow! AND THERE’S MORE! A wild roll will let you trigger Explosive which states that before damage is dealt enemy character within range 2 of of the target character suffers 1 damage. So wait until your enemy characters are bunched up a little then fire off some homing rockets from way back across the table and watch them squirm!

Even though Iron Man technically has no superpowers, in this game he does. Let’s see what they’re about.

SUPERPOWERS – First up is the active superpower Friday AI which for the cost of 3 power will allow 2 dice to be added to Iron Man’s next attack action. That’s a 7 dice attack when combined with Homing Rockets for 5 power, or 4 if running the Avengers affiliation.

Next up is the innate superpower Invincible Iron Man which states that when Iron Man would suffer damage, reduce the amount suffered by 1 to a minimum of 1. This is an infuriating ability to play against. It seems like every time I have managed to get some damage through the defence dice to hit Iron Man and then this ability triggers I have spent too much power to get only 1 or 2 damage on him. Damage cancellation is a powerful ability to have, and being able to cancel 2 damage automatically can make the difference between lasting for another round and being dazed/KO’d.

Last of all we have the innate ability Flight, allowing Iron Man to move his regular medium movement over terrain up to size 5.

INJURED SIDE – Nothing really changes on Iron Man’s injured side except, you know, HE GETS A NEW ATTACK! Unibeam is our first beam attack in the game (place the range tool, all characters within range that the tool touches are affected by this attack) and has a range of 5, strength of 6 and a power cost of 4. Combine this with Friday AI and you will be rolling 8 dice against a line of enemies who all have to make defence rolls – ouch! As per Homing Rockets this attack ignores line of sight and the defending character does not benefit from cover. Sheesh. Range 5 is huge, a 6 dice attack is huge, an 8 dice attack is even more huge, plus it hits every enemy character that the range tool touches. If the enemy characters are lined up just right this attack has the potential to completely change the board state. Even if you are only hitting 1 or 2 enemy characters though, this attack is still immense. Heck, it may even be worth getting him damaged as soon as possible so that he can flip and you can start triggering this attack left right and centre!

SUMMARY – One word springs to mind when I think of Iron Man, and that is range. He is hitting hard and he is doing it from far away. If you see Iron Man across the table make sure you don’t have your characters all lined up or you will pay for it for sure! He will be great for sitting on the objectives closest to you and firing off some ranged shots, and then when enemy characters have made their way across the table he can fly off to where he is needed most.

Team tactics cards-wise One-Two Punch stands out. After a round or 2 it is very likely that there will be a good mix of your characters and enemy characters around objectives, and because Iron Man can attack from so far away the conditions that trigger this card are very often going to be met, allowing 2 extra dice to be added to the attack roll for the cost of 2 power. Imagine combining this with Friday AI and Unibeam for a 10 dice attack! Drop Off is an obvious choice too because of Iron Man’s Flight capabilities. Patch Up also stands out, simply because of Unibeam. It is such a powerful attack that it makes it worthwhile to heal damage from Iron Man just so that you can get another attack or 2 out of him before he leaves the mortal plane. Recalibration Matrix jumps out to me as well. If you are rolling 10 dice and it whiffs the pain in your heart will be immense. Having the chance to reroll your attack will provide a little soothe and may well get you the attack roll that you needed.

Last of all we need to talk about Ricochet Blast. As if all the attacks that Iron Man has aren’t good enough, AMG have gone and given him a team tactics card attack. If it is Iron Man’s activation and he is within range 4 of an allied Captain America he can spend 2 power to play this card. Note, this card does count as an attack so bear that in mind when planning your turn. What does it do? It is range 4, strength 7 (!!!!!!!!) and has a power cost of… wait for it… zero! What makes this attack different is that range and line of sight are measured from Cap, not Iron Man. Plus, Iron man can reroll any number of attack dice during this attack (except for fails of course). Wow, what an attack – powerful and cinematic! Pulling this attack off is going to make you feel like the biggest cheese of all!

How have you found Iron Man to be?  What cinematic moments have you had with him?  Comment below!