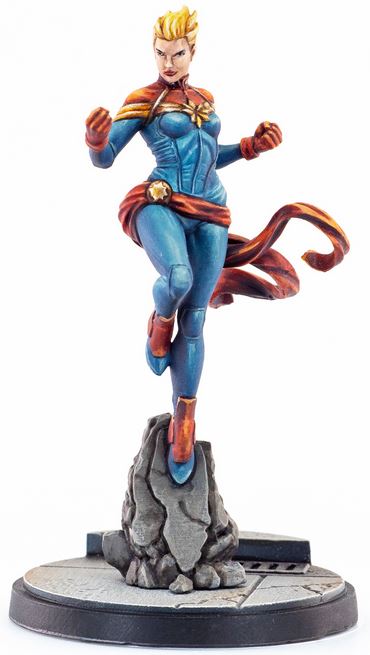 That’s right, it’s time to look at Superma…er…I mean, Captain Marvel. In the comics and films she is extremely powerful, so how is this translated into the game? I dare you to keep reading!

STAMINA – Carol has a stamina of 6 so she should be able to last a few rounds, barring some lucky dice rolls.

MOVEMENT – Cap 2.0 has a medium movement which is not as short as short, but also not as long as long.

THREAT – At threat 4 Carol is taking up a bit of size in your threat total. But does she have the power to back it up?

DEFENCES – As might be expected for an energy-based caracter Carol has a higher defence against energy attacks than physical or mystic, rolling 4 dice for energy and 3 each for physical and mystic. Reason number 1 for not targeting Captain Marvel with energy attacks.

ATTACKS – Carol has 3 attacks, the first of which is called Strike. It has a range of 2 and a strength of 5, and costs zero power. As is usual for most standard strikes Carol will gain power equal to the damage dealt.

Next up is Energy Blast which is representative of a blast of energy. This has a range and strength of 4 and, again, a power cost of zero. Unlike the standard Strike, this attack will not gain you power equal to the damage dealt, but will net you 1 power after the attack is resolved, regardless of whether any damage was dealt or not. Ideal for if you are in desperate need of a power to trigger some of Carol’s other abilities, or to pay for a team tactics card. As an added bonus, when Captain Marvel uses this attack she gets to reroll any number of attack dice, greatly improving the odds of getting damage through defence rolls and on to the target character.

Last up is Rocket Punch and with a name like that it has got to be good! It is range 3 which isn’t vast, but you get to roll 7 dice (!), and all for the princely sum of 3 power. Roll a wild and you get to stagger the enemy character after the attack resolves. As a reminder stagger means that the first action the enemy character takes on its activation must be a shake to remove the stagger condition, effectively robbing the enemy character of one of its actions. Powerful.

Captain Marvel is a truly superpowered character, so how have her powers been translated into the game?

SUPERPOWERS – First up we have the active superpower Binary Form which costs a steep 5 power. However, for that 5 power you get to add 2 dice to Carols attack and defence rolls until the start of her next activation. If you can afford it then it is good to trigger this as often as possible. Rolling 9 dice on a Rocket Punch and 5 to 6 dice for your defence rolls until your next activation is extremely powerful indeed and has the potential to keep Carol in the game for a good long while.

Next up is another active superpower called Danvers’ Special which costs 3 power. This superpower lets you choose a terrain feature or enemy character of size 3 or less within range 2 and throw it medium. At first glance this may seem to be a run-of-the-mill throw, but the specialty is in the size. Most throws are size 2, however Carol gets to throw size 3 – goodbye Ultron and hello an extra damage from terrain throws!

Carol’s last 2 superpowers are both innate, and the first is called Energy Absorption. This states that when Carol is defending against an energy attack (rolling 4 dice), then for each wild in her defence roll she can change one of the attackers criticals, wilds or hits to a blank, and then she gains 1 power for each die she changed this way. Wow. Reason number 2 to not target Carol with an energy attack. Dice manipulation is a very powerful ablity in games based around dice rolls, and having the chance to change the attackers dice to blanks is going to hurt and frustrate your opponent no end. And the additional power for doing so is such a great bonus.

Last up is the innate ability Flight which lets Carol stick to her medium movement when climbing terrain up to size 5, and Immunity [poison] which doesn’t really mean anything in the core set, but will gain more meaning as the character pool grows.

INJURED SIDE – No change on Captain Marvel’s injured side, her uniform just gets a bit tattier.

SUMMARY – Carol is the queen of energy. Hitting her with energy attacks is not wise, but sometimes it is going to be all that you can do. Her ability to manipulate dice is powerful and her Rocket Punch attack is going to do some serious damage. She has good ranged abilities, although she is no Iron Man, so she will be great for hitting from across the board a little. Hitting someone with Stagger is also going to be great, robbing your opponent of action economy; if she can get a few attacks off on different characters then your opponent will not be able to accomplish everything they want to on their turn.

How have you found Captain Marvel to be?  What cinematic moments have you had with her?  Comment below!