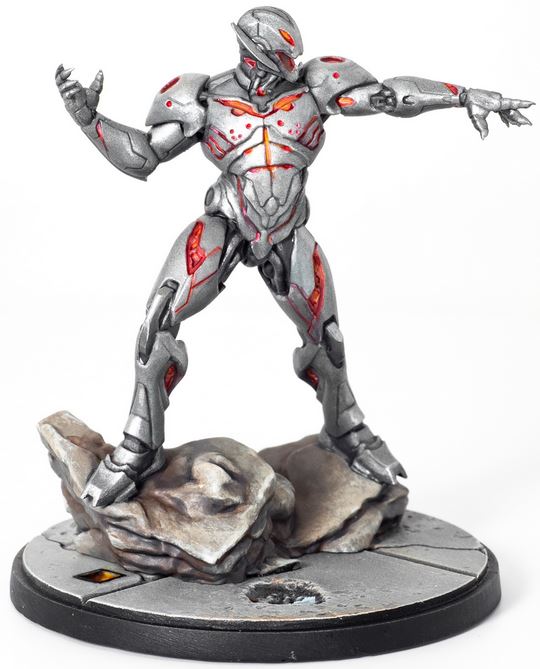 Yes, it’s time to look at the Ultimate Ron – Ultron! Also known as…er…Ultron! He’s big, he’s metal, he’s more advanced than a kettle! But what can he do in-game? let’s see.

STAMINA – At 6 stamina Ultron has staying power for sure.

MOVEMENT – Medium, which is right in the middle, somewhere between short and long.

SIZE – Ultron is slightly taller than the average human so he gets a size 3 rating.

THREAT – He is a cool 4 meaning he takes up a bit of space in your threat pool, but is he worthwhile?

ATTACKS – First up is the aptly-named Strike which can be done over range 2 and has a strength of 4 plus a power cost of zero. What makes this attack stand out over many others in the core set is that Ultron does not gain power equal to the damage dealt, rather he gains 1 power after the attack resolves, regardless of whether any damage was dealt. If you need that 1 more power to trigger one of your superpowers, get this attack done and have at it!

Next up is Energy Blast. I know the name might seem confusing, but to put it in laymans terms this attack is a blast of energy. This attack can be done over range 4, has a strength of 5 and, again, a power cost of zero – nice. As per standard strikes this attack will net Ultron power equal to the damage dealt.

Last up is Metallic Fury, a range 3, strength 7 and 3 power cost attack. Prior to choosing a target Ultron gets to choose whether this attack will be a physical attack or an energy attack which is nice, plus roll a wild and you get to make the target bleed. The ability to choose the type of attack will only become more and more valuable as the character pool increases, as doubtless some characters will have defensive abilities that trigger off certain types of attack. Indeed, Captain Marvel already has abilities that help her out when being hit with an energy attack. Being able to choose the attack type will go some way to skirting issues like this when attacking.

But what supowerpowers does the metallic megalomaniac possess?

SUPERPOWERS – First up we have the reactive superpower Analyse and Annihilate (sorry USA, I had to spell it with an S not a Z). This superpower should not be used as listed on the core set character sheet as it has been immediately errata’d. It should now read “during an attack made by this character, before resolving critical results it may use this superpower. Add an additional die to the defence roll for each critical in the opposing players defence roll.” So, if your opponent gets lucky and boosts their defence with some crits, fire this off and see if you can equal it with your bonus dice.

Next is Kinetic Field Generator and this superpower costs 3 power. This lets Ultron choose a terrain feature within range 3 and of size 3 or less and throw it medium; it is basically a souped-up version of the standard terrain throw which is usually size 2 thrown short. This is a great power to have on the board and could do some serious damage if your opponent makes a poor dodge roll.

Last of all Ultron has 2 innate abilities, firstly All Will Be Metal which states that when defending against mystic attacks Ultron gets to count each wild result in the defence roll as 2 successes. As of now M.O.D.O.K is the only real mystic threat in the game, but that is sure to change as the character pool increases, so Ultron is going to be a real consideration for defending against mystic attacks, especially as he rolls 4 dice against them as standard!

Last of all is Flight meaning Ultron can stick to his medium movement when climbing terrain up to size 5, and Immunity [bleed, poison], again, future-proofing Ultron for when new characters are added to the character pool. Put him up against Baron Zemo and watch the opposing player get frustrated with ineffective bleed moves!

INJURED SIDE – Ultron looks like he is exploding from the inside out and his stamina drops from 6 to 5.

SUMMARY – Ultron has got it going on with a nice 4 dice defence roll against physical attacks, but it is his mystic defences which stand out to me, with 4 dice rolled as standard, and All Will Be Metal making each wild rolled in the defence roll an additional success. Kinetic Field Generator is a great throw to have in the toolbelt and has the potential to do serious damage. Metallic Fury is really versatile, allowing you to choose the attack type, and then potentially stacking bleed on the enemy character as well. Ultron more than lives up to his 4 threat cost in my opinion.

Team tactics cards-wise we can’t talk about Ultron without talking about The Age of Ultron. If Ultron is KO’d then he can spend 8 power, is not removed from the battlefield, removes all special conditions, flips to his healthy side, removes all damage, drops all objective tokens and can be placed within range 3 of his current location. OH. MY. GOODNESS. RESURRECTION MODE ENGAGED! Even if you don’t use this card in-game, have it in hand and wave it around so that your opponent is put off from even attacking Ultron. The challenge is going to be saving up the 8 power you will need to trigger this card, so if you see Ultron across the table figure out ways to deny him power!

Another card that stands out is Smash which would allow Ultron to destroy a terrain feature of size 2 or less that is within range 1 and add 2 dice to his attack pool. This could be all you need to get some extra damage through and turn the tide in your favour.

Other than that the usual flight-based cards like Drop Off and combat cards like One-Two Punch will be useful to include in your hand.

How have you found Ultron to be?  What cinematic moments have you had with him?  Comment below!