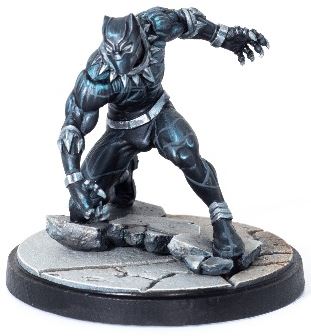 At long last Black Panther and Killmonger have made their way to the golden shores of Old Blighty. The kettle is on and the crumpets are toasting, so let’s see what the leader of our first new faction is all about.

STAMINA – BP has got a nice 6 stamina, meaning he has some lasting power.

MOVEMENT – Long! Oh, doesn’t it just bring a tear to your eye! Black Widow, Baron Zemo and Spider-Man are our only long movers so far, so to get another thrown into the mix, especially such a powerful one as we will go on to see, is just wonderful.

SIZE – As has consistently been the case in this game so far, humans are size 2.

THREAT – 4, which is fair enough considering his attacks and superpowers. But first, defences.

DEFENCES – Ol’ Panthy has an above average physical defence with 4 dice being rolled, and average energy and mystic defences, with 3 dice rolled for each respectively.

ATTACKS – BP’s first attack is called Strike and is range 2, strength 5 and zero power cost. As usual, power will be gained equal to the damage dealt. Here’s where it gets interesting though, before any damage is dealt the character gets pushed away from Black Panther short. Straightforward enough you might think – ha, wrong! Normally for an effect like this you would expect to have to roll a wild, but this is an automatic push that will trigger every time regardless of damage being dealt. Additionally, it could also be seen to be quite negative. Often, you will want to use a character to attack twice in an activation, yes? Well, open your box and put your range 2 tool next to your short movement tool and see if you can spot the problem. Got it? Yep, after this attack resolves, the targeted character is now out of range for a follow up Strike. An error in design? Or a nice synergy with a future superpower? Let’s leave this for now and come back to it later (I don’t want to give anything away but the superpower starts with P and rhymes with ounce…).

T’Challa’s second attack is called Kinetic Blast and is a range 2, strength 6 attack for a cost of 3 power. Well, I say 3 power, but when paying power for this attack BP can pay up to 3 additional power, then roll an extra dice in this attack for each power paid. If BP is sat on a nice big power pool, and/or if he needs to really do some damage this turn this is the way to go. As an added bonus, roll a wild and you will get to trigger Explosive Force which states after the attack resolves characters within range 2 get pushed away from BP short and suffer one damage. This could be used so tactically as it affects allied characters as well as enemy characters. Is there a cluster of enemy characters around an objective that you need? Explosive Force. Do you have a hero who is nearly dazed and you want he/she to flip at the start of the next turn? Explosive Force. Do you have some characters who only move short when they activate but you really need to get them across the board with an action to spare for an attack? Explosive Force. This ability is going to make for some interesting interactions. Considering that the core set long movers have been more objective rather than damage focused (ok, except for Zemo), BP is a nice mix of the two and I am really looking forward to getting him to the table.

LEADERSHIP ABILITY – BP has our first non-core set leadership affiliation. Indeed, this will be the first affiliation to be complete releases-wise as we are still waiting on a few more models to come out before we are complete on the Avengers/Cabal side. The Wakandan Affiliation as led by T’Challa is fittingly called King of Wakanda and states that after an allied character rolls attack, defence or dodge dice it may spend 1 power. If it does then the character gets to reroll one of the dice. Dice manipulation is the theme here and I keep saying it, dice manipulation in a dice-based game is powerful. Granted, you only get to reroll one dice, but sometimes that is all you need to finish an enemy off or dodge some damage. It will be interesting to see how Killmonger, Shuri and Okoye play into this affiliation.

But what supowerpowers does the great black cat possess? Read on!

SUPERPOWERS – Up first we have the active superpower Mantle of the Black Panther which costs 2 power. For the cost of 2 power you get to reroll any number of attack dice for your attacks this turn. Again, dice manipulation – great. So let’s say BP has 8 power. You can trigger Kinetic Blast for 3 power, pay an extra 3 to roll 3 extra dice, giving you 9 dice in total. As a bonus you pay 2 power for Mantle of the Black Panther to ensure that if your attack roll is poor you can reroll any number of dice you want (except critical fails of course). Amazing.

Next we have another active superpower fittingly named Pounce. Again, this costs 2 power, and for this cost you get to throw BP short. Best of all BP does not take damage from hitting terrain or other characters. Now, on first glance this may seem a bit odd. Other than the obvious advantage of non-action movement, why would you want to bounce yourself off terrain/characters? The answer is twofold. Firstly, although BP does not take damage from a collision the terrain/target character does. BP is size 2 so that is 3 damage heading to an enemy character, who will then have to try and dodge it. BP will also get to destroy interactive terrain and this can be useful to clear the battlefield so as to protect allied characters from thrown terrain. Secondly, Strike. We discussed earlier how BP can Strike, push the target character away short, but then be out of range for a second attack. Not anymore. Do a Strike, push the target character, pay 2 to Pounce which forces the enemy character to do a dodge roll, apply any damage from the throw, then Strike again. 2 attacks, a throw and the potential to move an enemy character away short twice. Great for area control and for doing damage. Powerful.

Last of all is the innate ability Vibranium Armor (you have no idea how much it hurt me to leave the U out of armor) which allows BP to add blanks in his defence rolls to his successes when defending against physical or energy attacks. Combined with BP’s 6 stamina this gives him real longevity. Hello, Cap 2.0!

INJURED SIDE – There is an interesting change to BP when he flips to his injured side. Vibranium Armor switches from being an innate ability to a reactive ability, and now costs 2 power. The text also changes slightly, now BP gets to add 2 dice to his defence roll when defending against a physical or energy attack. This is a pretty significant change from BP’s healthy side, and it is something you will need to keep in mind when planning BP’s future activations.

SUMMARY – You know, I wasn’t going to buy the Black Panther/Killmonger pack when it was first announced because they are not characters which I am particularly close to, despite Panthers sculpt being absolutely awesome. The thing that swayed me was the Crisis Card that was announced as coming with the pack because it just sounded so fun. But looking over BP’s character card I really, really like him. There is a healthy balance of damage output, movement, area/objective control and dice manipulation which I think makes BP a real all-rounder in a squad; I think BP will really pull his weight in a team.

Team tactics cards-wise let’s talk first about Wakanda Forever, which comes in the Black Panther/Killmonger set. This allows BP to carry out an out-of-turn zero cost attack for the cost of 1 power. Best of all this can include any number of allied Wakandan’s, so if you are running a full team have 4 free attacks on the house! Additionally, Follow Me could be good in that it would allow a quick activation of BP, should the need for him to be elsewhere suddenly become apparent.

Also, as BP is such a great all-rounder you will want to keep him on the battlefield for as long as possible, so cards like Patch Up and Second Wind could be really useful to provide a bit of healing/condition removal. Drop Off could be great to fly BP into an enemy-controlled objective and also get him a free attack. As BP gets rerolls aplenty the risk of the attack whiffing is gratly reduced than if you were to Drop Off another character. Gamma Launch is in a similar vein but does rely on Hulk being run in the same team – getting him on an objective quickly could help you to get a good jump-start to the game. Lastly, as BP has such great range and robust stamina he is an ideal extraction objective-grabber, so Mission Objective could be a great card to have in hand for when BP is taking heavy damage and is looking like he is going to be dazed/KO’d.

How have you found Black Panther to be?  What cinematic moments have you had with him?  Comment below!