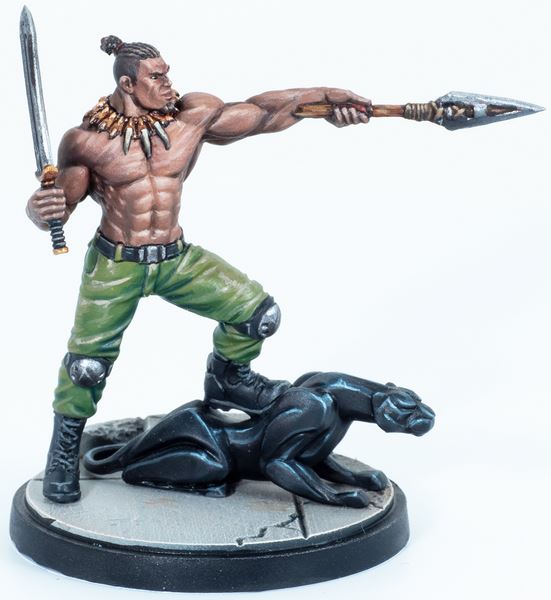 Spears at the ready, Killmonger is in town! What does the great bare-chested one do, and just what is he using those knee-pads for?! Let’s see.

STAMINA – At 6 stamina Killmonger has what it takes to stick around for a while.

MOVEMENT – Slap bang in the middle at medium movement.

THREAT – KM is threat 4, so hopefully he will have some solid abilities to back that up.

DEFENCES – Killmonger is all about the physical defence, with 4 dice being rolled. Otherwise it is 3 for energy and mystic.

ATTACKS – KM has 2 attacks, the first of which is called Vibranium Weapons, because although being one of the rarest metals on the planet, vibranium is apparently ABSOLUTELY EVERYWHERE! This is an energy attack and has a range of 2, a strength of 5 and a power cost of zero. As usual with standard strikes, power equal to the damage dealt is earned. This attack also has a wild ability called Pierce which allows KM to change one of the defenders criticals, wilds or defences to a blank. This doesn’t cancel criticals unfortunately, as the modify dice step occurs after resolving critical rolls, but anything that cancels one of the enemy defences is fine in my book.

The second attack is a physical one and is called Black Ops Strike. This is range 3, strength 7 and has a power cost of 3. If this attack deals any damage then after the attack resolves you get to place Killmonger within rage 1 of the target. That wet sound you hear is my drool hitting the floor. Attacking from range 3 then moving to within range 1 of the target character is a big movement for KM, and if you have some closely bunched enemy characters you could fire this off on one enemy, move, target another, then move again; effectively teleporting around the board whilst firing off attacks. Amazing. As a bonus, roll a wild and you will get to stagger the target character.

SUPERPOWERS – First up we have the active superpower Charge which costs 2 power and let’s Killmonger combine a move and attack into 1 action, basically giving a bonus action for KM’s activation. This works nicely on Baron Zemo, and makes sense on Killmonger too.

Next is the reactive superpower Special Forces which costs a measly 1 power. This superpower let’s you use defence rolls as your results rather than hit rolls when calculating successes in your attack rolls for this attack. I’m sure we have all had those rolls where most dice come up shields, so this is handy to have on hand to make sure that some damage gets through.

Last of all we have 2 innate abilities. Firstly, Focused on the Kill which lets Killmonger add 2 dice to his attack roll if he is attacking a character who he has already attacked this turn, and Kill Count which lets KM put a kill count token on his character sheet whenever he dazes or KO’s a character. When KM is attacking he gets to reroll one attack dice for every kill count token in his dice pool. Both of these superpowers are a fun way of getting extra dice and rerolls to make sure that at least some damage is getting through.

INJURED SIDE – KM’s stamina drops from 6 to 5 once injured, but other than that there are no changes.

SUMMARY – Killmonger is a pure damage-dealer, and seems to work best when he is focused on targeting a single character. Black Ops Strike is absolutely delicious for getting him where he needs to be on the board. His superpowers are cheap, but as there are only 2 of them and Avengers affiliation only reduces to a minimum of 1 it seems a bit pointless to run him in an Avengers team. As he is so focused on dealing out damage running him in Cabal makes sense, gaining him a power every time he does some damage, which he can then use to fuel his Charge and Special Forces superpowers. As for running him in a Wakandan affiliation that would make sense too. As a reminder, the Wakanda affiliation lets a character spend 1 power to reroll one of its attack, defence or dodge dice. Rerolls are powerful and could ensure that the big attack gets through, or that you manage to defend/dodge enough to keep KM alive for another round. All in all I like Killmonger a lot, especially for where you have one big enemy which you need to take down like a Hulk or a cosmic threat Ultron. It will be interesting to see how he synergises with Shuri and Okoye when they eventually release and we get a good picture of the Wakandan synergy as a whole.

Team tactics cards-wise we have to talk about Usurp the Throne. Play this card and pay 3 power from Killmonger. Killmonger then gets to add 2 dice to his attack rolls when attacking the enemy character with the highest threat value. If Killmonger manages to daze or KO that character this round then the Killmonger player get 2 victory points. This is a really special card in that so far this is the only way to gain victory points outside of the mission objectives. It is a bit of a gamble though. I was enjoying a game of All Will Be Metal last night and my crisis team member was running Killmonger. He threw this card down, attacked Ultron twice and… didn’t daze him, thereby missing out on 2 victory points. But really, if you plan well and build the damage up, then swing in with Killmonger to finish off then you should be able to execute this most times and gain yourself those precious victory points. If you are running Killmonger in your squad then this card seems like an auto-include.

If you are running him in a Cabal squad then Cosmic Invigoration could be a good call, getting KM another activation so he can deal out some more damage. Drop Off could also be good if you are running him in a team with some fliers. Flying him across the table and getting him into position, as well as getting him a free attack could present a real tactical advantage when done at the right time. Seeing Red could also be good if a nearby allied character gets dazed or KO’d, allowing him to make an out of turn attack against the enemy character. Recalibration Matrix is a staple, rerolls when attacks whiff are nothing to sniff at.

As KM will be spending most of his time dealing out damage keeping him around is priority. As such Patch Up could be a good include, although it is quite costly. Wakanda Forever also makes sense, allowing all Wakandan characters to pay 1 power to each perform an attack with a power cost of zero. Battle Lust could also be good, allowing Killmonger to pay power equal to his size to add dice equal to his size to his attack roll, then getting to push the target character away short. Dark Reign also makes sense, allowing all Cabal (including Killmonger) to reroll any attack dice when attacking a certain character this round. One-Two Punch also lets dice be added to his attack rolls for a nice big swing.

If you see Killmonger across the table then Disarm could be good, robbing Killmonger of 2 attack dice for a round. Trip Up could also be a good shout so as to get stagger and stun onto him.

How have you found Killmonger to be?  What cinematic moments have you had with him?  Comment below!