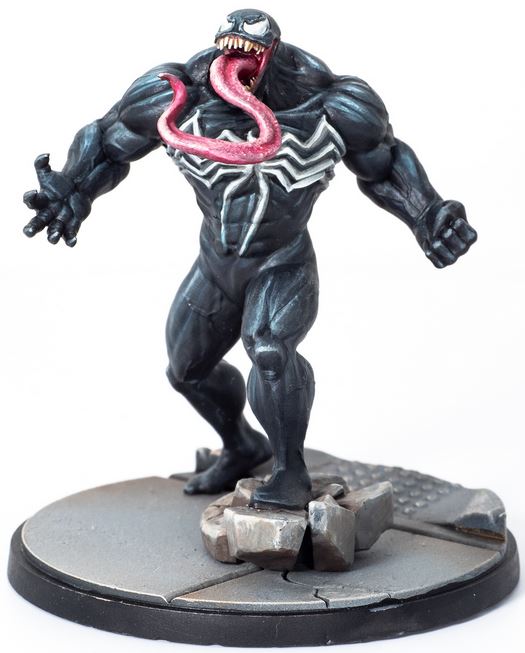 Oh I have been waiting for this one. Venom is such an iconic character and to get to play him so early in the life of this game is a real treat. How has he been translated into the game? And how are we going to add drool to his tongue?! Let’s see!

STAMINA – Venom has a hefty 7 stamina, so he has got staying power and then some. Considering his threat value he is head and shoulders above the core set characters when it comes to the ratio of stamina to threat.

MOVEMENT – Venom moves short (not small, people) which means that alas he won’t be moving all over the board throwing out damage. But he does have a trick or two up his sleeve to compensate for this.

SIZE – At last we have another size 3 character to go with Ultron.

THREAT – As Venom has 7 stamina you would think his threat would be a little higher, but no, he comes in at a cool 4, meaning he can easily step into the shoes of a core set character when building a roster.

DEFENCES – When it comes to defences, Venom is all about the physical with 4 dice being rolled. Energy is weak with a mere 2 dice, which makes thematic sense considering Venom’s proven weakness to sound and fire. At 3 dice, Venom’s mystic defence is right on average.

ATTACKS – Eddie’s first attack is a physical one and is called Symbiote Tendrils. It is range 3, strength 5 and has a power cost of zero. As is usual for a basic strike, Venom will get to gain power equal to the damage dealt by this attack. An added bonus though is that this attack gives out the bleed condition. As standard. No wild roll required. As a reminder a bleeding character takes a damage at the end of each of its activations until it is no longer bleeding (this damage does not let the character gain a power). To stop bleeding a character needs to spend one of its actions on its activation to shake the bleed condition. So Venom has a way here of effectively stealing actions from enemy characters – pure action advantage, delicious!

Next up is We Are Venom which is a range 3, strength 7 and 3 power cost attack. Straightforward enough! After this attack resolves Venom gets to remove 1 damage from himself for each damage inflicted by this attack. I don’t know about you, but this text makes me quiver with anticipation. This, for me, is the stuff of dreams. Unless you have what I like to refer to as “poo-hand” (which is where no matter how many dice you roll, you will always roll the worst dice roll you possibly can for the situation which you are in) then this 7 strength attack is going to be doing some damage. To then have the free (not even a wild roll) ability to remove damage from Venom is just absolutely delicious. Bye bye Patch Up!

As if Venom’s attacks weren’t good enough, he has superpowers too!

SUPERPOWERS – First up we have active superpower Klyntar Rage (the Klyntar are the cosmic race that Venom belongs to in case you didn’t know) which has a power cost of 3. This superpower lets Venom choose a terrain feature or enemy character of size 3 or less within range 2 and throw it medium. No arguments here, this is a nice ability to have and covers a big chunk of terrain sizes and characters which are currently available.

Second we have Web Snare which is another active superpower and has a power cost of 2. This allows Venom to push a character within range 4 towards him medium. This is a nice way of making up for Venom only having a short move, and range 4 is no slouch. Parking Venom up for a round and spending power pulling in multiple characters is a perfectly feasible option, because this superpower can be used as many times per activation as you can afford, as long as it only affects an enemy character once per turn. This is a nice bit of objective control.

Up next we have the reactive 2 power cost ability called So Many Snacks. Venom gets to trigger this ability after an attack against him has resolved as long as the attacker is within range 3. If so, then Venom can make an attack against the attacker. This is a really great ability to have. Venom could take an attack within range 3, take whatever damage the attack inflicts, gain power for the damage taken, use that to pay for So Many Snacks to grant the ability to attack back, then use any remaining power for We Are Venom which will hopefully deal some big damage and let Venom remove most, if not all, of the damage just taken from the attack. And just keep cycling this glorious combo every round you can afford it. Granted, it is roll-dependent and you won’t be able to fire off this combo every time, but when you do it will feel oh so good!

Last of all we have 2 innate abilities, Symbiote Instincts and Wall Crawler. The former states that when Venom is attacking the enemy character cannot modify their defence dice. Mmmmm. Anything that stops any form of dice advantage is a beautiful thing, and having this as an innate ability on a character is great. Wall Crawler is great too, meaning that terrain is no real obstacle for Venom, and so you can get him where he needs to be with minimal disruption from your surroundings.

INJURED SIDE – Not much changes when Venom flips, he just drops from 7 stamina to 6, still solid.

SUMMARY – There is nothing about Venom that I dislike really. He has solid attacks, built-in healing, good stamina and a size 3 throw. Pushing characters towards him is a nice way of negating the negatives of only moving short, and stopping opponents from modifying their dice is a nice ability on top of all of that. I strongly suspect that Venom will be in my list of 10 for some time to come!

He would work somewhat in a Wakandan affiliation, getting a single dice reroll on any attack, defence or dodge dice if he pays 1 power to do so, but I much prefer him in a Cabal or Avengers affiliation; getting a reduction on superpower cost with Cap’s ability, or gaining more power when doing damage with Red Skull’s ability.

A few team tactics cards seem apt for use with Venom, but lets start with Lethal Protector which comes in the Venom pack. If an enemy character targets an allied character within range 3 of Venom for an attack then Venom can spend 2 power to place himself within range 1 of the allied character and become the new target of the attack regardless of range or line of sight. This may seem a bit counter-intuitive at first – why on earth would you want such a heavy hitter to be the target of an attack? Well, you could play this card for 2 power, move Venom to within range 1 of a target character (another nice way of getting around Venom’s short movement), take the damage and gain the appropriate amount of power, trigger So Many Snacks to allow Venom to attack back, and then use We Are Venom to hopefully do a nice big chunk of damage and heal all or most of the damage he just took from the incoming attack. Delicious!

We should also discuss Uneasy Allies, the other card which comes in the Venom pack. It does require you to be running Spider-Man in the team too (come on Spider-Verse affiliation!), but that should be doable, depending on the scenario. During Spider-Man or Venom’s activation when they target an enemy with an attack within range 2 of each other both characters can take 1 damage to add 3 dice to the attack roll. Very nice indeed. You can do this on Venom to get a big chuck of damage (and therefore healing) when using We Are Venom, and it is good on Spider-Man too as his attacks aren’t quite as heavy-hitting as other characters.

As for other available cards a few come to mind. A.I.M Lackeys could be good if you are also running M.O.D.O.K as it will let Venom take an additional move action during his activation, ensuring that you can get him closer to where you need him when in a tight spot. Even though he has some built in healing Patch Up would be good for keeping him around longer as he is just so good. Drop Off is also a nice way to move him across the board if you have some allied flying characters in your team, thereby negating some of the restrictions of the short movement (the same also applies for Gamma Launch if you are running Hulk). Battle Lust could also be good if you are moving Venom then attacking, allowing him to pay power equal to his size to add that many dice to his attack and then pushing the target character away short if damage is dealt. Seeing Red is also a viable option, allowing Venom to make a free attack if a character within range 2 is dazed or KO’d. Recalibration Matrix is also a regular include for any list because it allows rerolls when you need them most.

Lastly, if playing against Venom I thought Disarm could be good, making Venom roll 2 fewer dice on his attack rolls, and thereby potentially healing less from We Are Venom.

How have you found Venom to be?  What cinematic moments have you had with him?  Comment below!