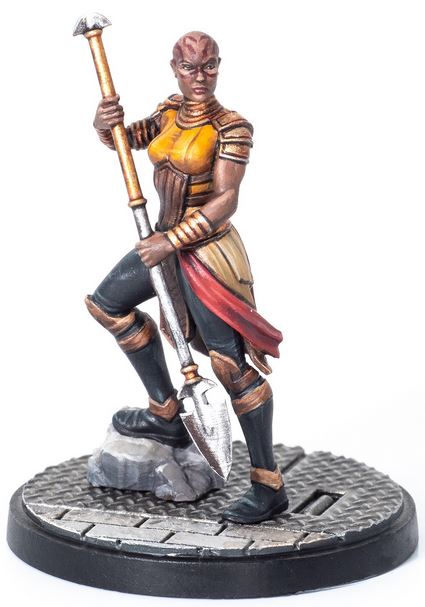 OK-yay, or Okoye if you want to get technical, is almost here and is the last character we are waiting on to round out the Wakanda faction (for now).  So what does she do, and, more importantly, what kind of hats does she wear to keep the chill off her head?  Let’s see.

STAMINA – Okoye’s stamina, somewhat surprisingly, is 4 which is 1 lower than Shuri’s.  Strange considering the former is a warrior and the latter is a scientist.  But, there must be a good reason…

MOVEMENT – A medium move here which is average enough.

SIZE – In a revelation that shocked no-one this human character is size 2.

THREAT – 2!  Oh doesn’t it just make your heart flutter with excitement!  Aren’t you just brimming with joy, jubilation and exuberant energy?!  At last we have another character who can be easily slotted into a roster to fill a gap in threat.  But at such a low threat does she affect the board state much?

DEFENCES – Just like Shuri, Okoye is average all the way with 3 dice rolled for each defence type.

ATTACKS – First up is a standard physical Strike which has a range of 2, a strength of 4 and a power cost of zero.  As usual, power equal to the damage dealt is earned after the attack resolves.  Nice and basic, easy enough.

Next is an energy attack called Vibranium Spear Blast.  This is range 4 and strength 4, and also has a power cost of zero.  This attack gains Okoye 1 power after the attack resolves, regardless of whether any damage has been dealt.  A nice way of gaining the power you may need to trigger some other effects on a turn.

Last of all is the physical attack Vibranium Spear Thrust which has a range of 2, strength of 5 and power cost of 4.  There is no other text on this ability other than 2 wild abilities (that you only need to roll 1 wild to trigger, remember).  Pierce lets you change one of the defending characters critical, wild or defence rolls to a blank, and Flurry lets you make an additional strike attack after this attack resolves.  5 dice is quite a small dice pool compared to most of the other “big attacks” which characters can make in this game, but considering Okoye is only a 2 threat character this seems fair enough.  Plus, Flurry is a nice ability that can potentially net you another 4 dice attack.  And Pierce is always good.

But what superpowers does Okoye possess? Read on!

SUPERPOWERS – First up is a reactive superpower called Bodyguard, now why does that sound so familiar?  Yep, just like Cap, Okoye is diving in front of attacks headed for her teammates.  This ability states that when an allied character within range 2 of Okoye is targeted by an attack Okoye can pay 2 power to use this superpower, and she becomes the target of the attack regardless of range and line of sight.  A nice ability and at a nice discount if running the Avengers affiliation.  But considering Okoye only has 4 stamina the risk of her keeling over quickly are high.

Okoye’s next 2 superpowers are both innate.  The first is called General of the Dora Milaje and this superpower lets Okoye reroll one dice in her attack or defence rolls for free.  This adds up nicely with the Wakandan affiliation ability and makes for great dice consistency, plus it means she (hopefully) gets to stick around a little longer.

The second innate superpower is called Martial Artist.  This superpower states that when defending against a physical or energy attack targeting Okoye from within range 2 then Okoye can add blanks in her defence rolls to her total successes, a nice way of making sure she doesn’t get wiped off the board too quickly.

INJURED SIDE – No change beyond ripped tights.

SUMMARY – Okoye doesn’t strike me as a big attacker (although if you can pull off Flurry whilst using Vibranium Spear Thrust you could potentially be doing a bit of damage), nor does she strike me as a particularly amazing objective-grabber with only medium movement and no throws or pushes.  What she does strike me as is a human shield; her rerolls and ability to add blanks to her defence mean that she can ensure that she sticks around long enough to protect your bigger players from damage and get them where they need to be to be doling out damage and earning you victory points.  And I like that.  She is like a mini Captain America and with a threat cost of only 2 there is little reason not to at least consider her for your roster.  Is she good enough to justify using her over Black Widow?  It depends on what you are going for I suppose, but Black Widow is great for objectives and, after all, objectives are what get you points and win you games.  The again, Widow isn’t going to protect your other characters as well as Okoye is.

Okoye is fine in an Avengers list, but she only has 1 superpower that actually has a cost, and that is only 2 power.  But, in an Avengers list she can reliably trigger Bodyguard every round, so that is something.  But then again, trigger Vibranium Spear Blast and hey presto, you’ve got yourself the second power per round you need to pay for Bodyguard.

Her attacks are quite weak compared to other characters, so there is a lower likelihood of damage getting through, so running her in a Cabal affiliation may not be the best (but that doesn’t mean don’t try it).  Wakanda is probably the best affiliation to run her in, paying 1 power to gain 1 reroll on an attack, defence or dodge dice roll.  This stacks with her own abilities (remember, the rules state that a dice can only be affected by a special ability once, but it can be rerolled multiple times as long as you can afford multiple reroll abilities), and it helps to ensure that even though she has only 4 stamina she should be able to stick around for a little while.

Team tactics cards-wise, Vibranium Shielding would give Okoye a bit of protection from incoming damage if she was in an affordable range of Black Panther or Shuri.  If you are running her in a team with Venom then Lethal Protector would prevent her from taking a bit of damage too, and help you out with Venom as well.

Wakanda Forever is an obvious choice also, allowing Okoye to spend 1 power to take a zero power cost attack against an enemy character.  Drop Off could also be good to get Okoye in near to a character that looks like they could do with some Bodyguard action from her in order to keep them alive.  As Okoye has such low stamina Seeing Red could be good as well, as she is at a high risk of getting dazed/KO’d quickly, and this card will let an allied character within range 2 make a free attack against the KO/Dazing enemy.  Lastly, Inspiring Monologue (wahey!) could be good, as it will allow her yet more rerolls for any of her defence dice, potentially keeping Okoye around longer so she can protect your troops.

How have you found Okoye to be?  What cinematic moments have you had with her?  Comment below!