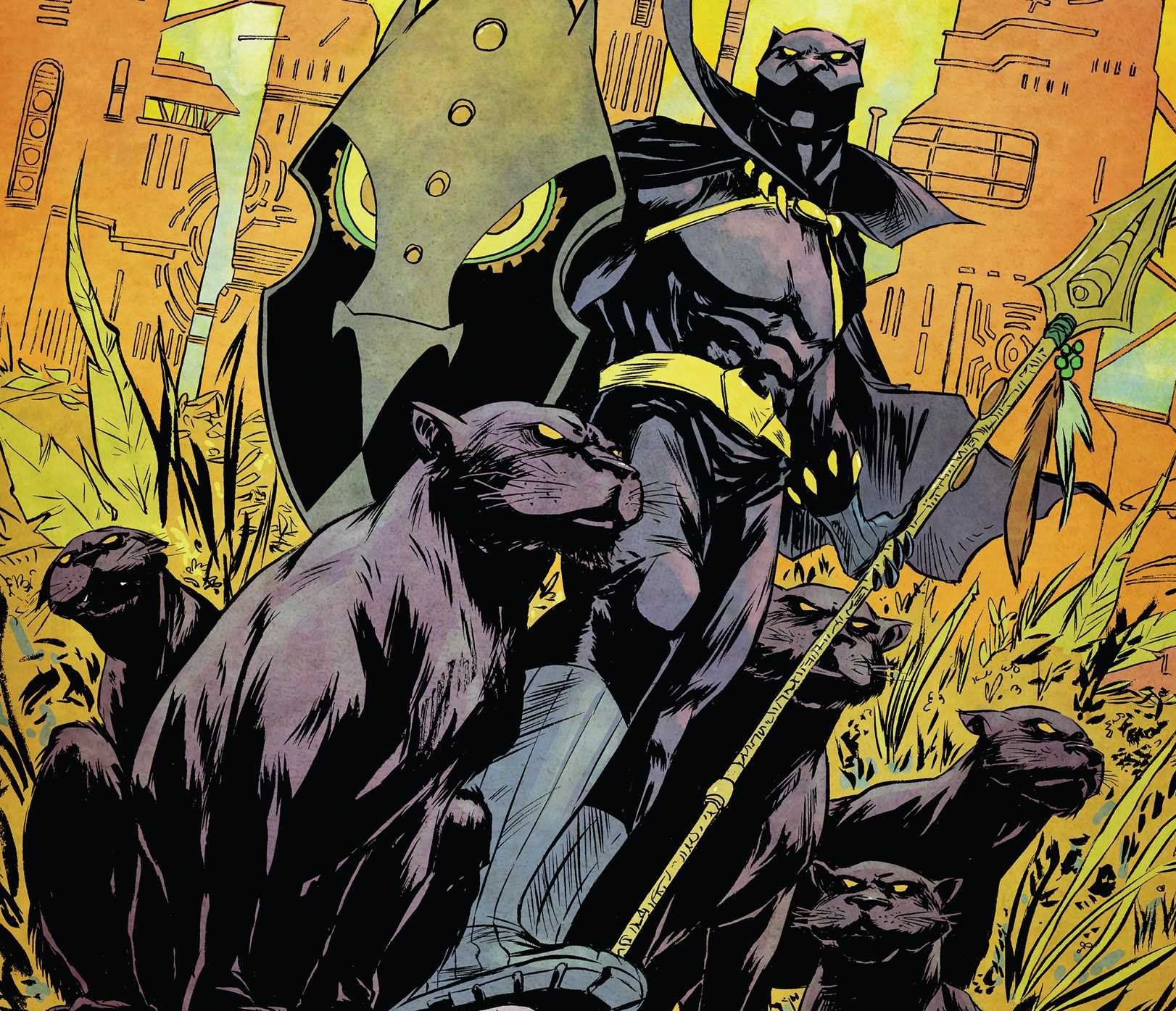 Somewhat surprisingly, Wakanda will be the first complete affiliation in the game. True, Avengers and Cabal came first, but we are still waiting on Vision, Thor and Loki before we can call these teams done and dusted. Now that the details of the Shuri and Okoye pack have been revealed, we can form a good idea of the Wakandan affiliation as a whole.

So, how does the team work together, what are the strengths of the affiliation, and what other characters work well within the team? Let’s see.

The Wakandan affiliation leadership ability is on the Black Panther character card and is called King of Wakanda. This states that after a character rolls attack, defence or dodge dice it may spend 1 power. If it does, that character may reroll one of the dice in that roll.

Dice consistency through rerolls is the theme of the Wakandan affiliation, and 1 power for 1 reroll is a nice ability to have and can get you out of a tight spot when the need arises. I especially like that this applies to dodge rolls, not just attack and defence rolls. Considering how much terrain gets thrown around over the course of a game this is a nice ability to have access to.

The Wakandan affiliation comprises only 4 characters. Let’s take a very brief look at how each character plays, and then discuss.

Black Panther (T’Challa) – The team leader. Black Panther has a long move, making him great for objective work. He also has decent attacks, good defensive capabilities, and can throw himself into objects and characters without taking any damage.

Killmonger (N’Jdaka) – The powerhouse of the group. Killmonger has one job and that is to deal out damage. If you focus on one particular target then you can increase your damage output with extra dice, evening gaining extra dice the more characters you take out. Additionally, a Killmonger-specific team tactics card allows for victory points to be earned outside of the usual objective scoring.

Shuri (Shuri) – Pure control. A low damage output but consistent at stunning and pushing enemy characters, with the capability to stagger as well. She also has a superpower to allow allied characters to reroll if she pays power. Power generation is a weakness and she has only average defences.

Okoye (Okoye) – A mini-Cap. Okoye has the lowest threat of the team (a mere 2 threat), quite low stamina, average defences and a modest damage output. She can bodyguard other characters, however, has free rerolls for an attack or defence die and can add blanks to her defences if being targeted at close range.

I love Black Panther because he can be whatever you need him to be. He is great for objective control, but can also bring damage out when you need him to. He has some nice area control too, with a few push abilities, plus he has decent defences, and some armour which buffs him up a bit.

Then again, Killmonger is great fun to have just wander round the board dealing out lots of damage, and his inbuilt ability to teleport within range 1 of his target and to combine a move action with an attack just feels so good to pull off! Plus, getting extra dice for attacking the same character consecutively is delicious.

Shuri has really nice control, and slightly lower threat than the male members of the team. Her built-in pushes, rerolls for other characters and ability to dole out conditions makes her a great tool for controlling the battlefield.

And lastly Okoye is interesting due to her super low threat. Her damage output and stamina are quite low, but her abilities are focused around keeping other characters alive and making sure whatever attacks and defences she uses get through thanks to her inbuilt rerolls.

For more in depth discussions of the individual characters click on the links in the characters page in the menu (or here).

There are a number of Wakanda-specific team tactics cards which we have to discuss.

Wakanda Forever is the main one, and at this stage in the game is pretty much an auto-include if you are running a Wakanda team. This card allows any number of Wakanda characters to spend 1 power each. If they do then they may each immediately perform an attack with a cost of zero. What this means is that Black Panther can Strike to deal damage, gain power and push a character short, Killmonger can use Vibranium Weapons to deal damage and gain power, Shuri can use Panther Gauntlets to deal 1 damage, gain 1 power and push the target character short, and Okoye can use her attacks to do some damage and gain power. This is no small thing to be able to accomplish off the back of 1 team tactics card!

Vibranium Shielding can be played by either Shuri or Black Panther and has a cost of X (X can be between 1 and 5). For the round the playing character and all characters within range X of it gain the invulnerability superpower, which lets them ignore 1 incoming damage to a minimum of 1 (just like on Iron Man). This is a really nice card to have access to, and means that a weaker character like Okoye can potentially stick around a little longer. This can feel really great to setup over the course of a round or two, then fire off to great satisfaction.

Usurp the Throne is Killmonger-specific card and costs 3 power to play. For the round you play it, Killmonger adds 2 dice to his attack rolls when attacking the enemy with the highest threat value on the board. Then, if Killmonger dazes or KO’s that character this round then the controlling player scores 2 victory points. This is a really interesting card, and is currently the only way in the game to score victory points beyond claiming objectives. Extra dice is really nice (poetry!), and then to have a single-round focus on one character and potentially get points off the back of that (as well as taking a character out) is simply scrumptious!

I really like how the team works together. Between them they amount to a mere 13 threat, meaning that you can add in Black Widow to take you to 15 for Gamma Wave Sweeps Across Midwest, or keep adding characters to get you up to higher value crisis cards.

Across the 4 of them they have good damage output, great control and rerolls upon rerolls upon rerolls. It’s crazy how much reroll power there is in this team, with each ability just stacking and stacking and stacking. The team tactics cards add nice damage output combined with potential control, and a nice bit of defence too. Really, what’s not to like with this team?

As for characters to pair with it obviously depends on the crisis being played. That being said, Venom could be great as his abilities match well with the attacking characters, but also can help in defending Okoye and keeping her alive, whilst generating attacks and healing himself (such an amazing ability).

If you are wanting to build on the reroll theme then Baron Zemo could be good as he has inbuilt reroll power, and his Charge ability matches up nicely with Killmonger’s.

There is a lack of flying and wall-crawling characters in the team, and so terrain could pose a problem, depending on the setup of the board upon which you are playing. As such it might be that you want to add such characters as Iron Man or Spider-Man to your team. Plus, this will give you access to such team tactics cards as Drop Off. Iron Man, Ultron and Captain Marvel are all also good options for big damage-dealers who can hit from a good range.

Obviously Black panther fits right into an Avengers list, as does Killmonger with Cabal. Shuri could be good in a Cabal team as her standard attack will hopefully be dealing at least 1 damage each time she fires it off, in which case the cabal affiliation will net her an extra power. Her superpowers aren’t particularly expensive so running her in an Avengers team doesn’t make much sense, unless there is something really specific you want her for.

Okoye could work in either an Avengers or Cabal list which is nice, but again, this would depend entirely on what crisis cards you are playing.

And that’s it for the Wakandan team. How have you been finding them? And what characters have you enjoyed teaming up with them? Comment below!