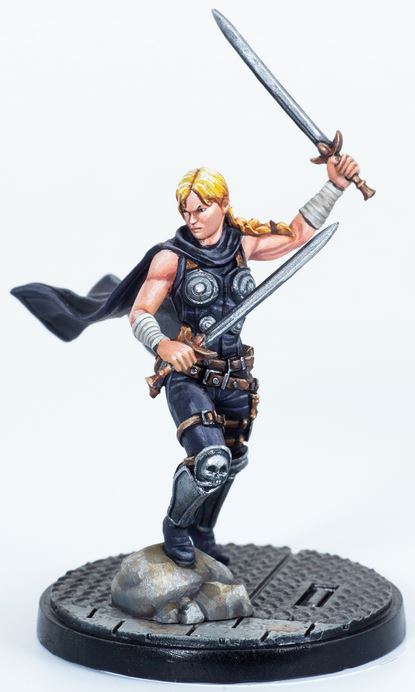 To complement the prince (and future king) of Asgard we get Valkyrie, the fierce warrior and leader of the Valkyrior.  Riding on the back of her Middle Earth named winged horse (Aragorn) and wielding her dragonfang sword, she present a powerful mental image indeed.  So, how has this been translated into the game?  Let’s see.

STAMINA – At 6 stamina Valkyrie is up there with Thor.

MOVEMENT – Again, like Thor, Valkyrie has a medium movement.

THREAT – Now we see the first difference between Valkyrie and Thor.  Whilst Thor is flying high with a threat cost of 5, Valkyrie is sitting pretty with a nice affordable threat cost of 3.

DEFENCES – Valkyrie has average defences right across the board with 3 dice rolled for each defence type.

ATTACKS – First up we have a standard Strike which has a range of 2, a strength of 5 and a power cost of zero.  As usual, power equal to the damage dealt is gained from this attack.  This is straightforward enough fare for us to wrap our heads round by now, so let’s move on.

Valkyrie’s second attack is also a physical one and is called Dragon Fang.  This also as a range of 2, but a higher strength of 7 and a power cost of 3.  After this attack resolves the target character gains the bleed special condition and, roll a wild to trigger flurry which, just like with Okoye, lets you do a free Strike attack after this attack resolves.  Anything that nets you a reroll so you can get a wild is going to be good with this attack (i’m looking at you Wakanda).

That’s it for attacks, but what superpowers does Valkyrie possess? Read on!

SUPERPOWERS – First is an active superpower called Asgardian Might.  This has a power cost of 2 and allows Valkyrie to throw a terrain feature or enemy character of size 2 or less and within range 2 short.  Any throw that allows character throws as well as terrain throws is great to have, and since you are going to be within range 2 for Valkyrie’s attacks anyway, this is a nice bit of something extra to have access to should you feel the need to put your sword away and do some chucking.

Next is another active superpower, this time called Charge.  By now we should all be able to chant in unison what this superpower does – it allows you to combine a move action with an attack action, all for the cost of 2 power.  Action advantage like this is always nice to see on a card, and this is a nice way of getting Valkyrie into the range 2 required for her throws and attacks.

Next is yet another active superpower, and this one is called Warrior of Legend which, with a name like that, better be doing something glorious.  This costs 2 power and states that during Valkyrie’s next attack this turn she can change one die to a hit for each wild or critical in her attack roll.  This seems to me to live up to the name, dice manipulation is strong and to be able to change blanks or shields to hits could really swing a weak-rolled attack in your favour.  This is nice if pulling off a big attack and wanting to get that little bit extra damage down.  Tasty.

Last up we have the innate ability Asgardian which, just like Thor, means that Valkyrie gets 2 power in the power phase rather than the usual 1.  Very nice.  This means that every round she can straight away afford to trigger one of her superpowers, no small thing.

INJURED SIDE – The only change here, other than the art, is in the stamina department, where Valkyrie drops from 6 to 5.  Not a huge change and one which I am sure we can live with.

SUMMARY – I like the look of Valkyrie.  She seems to me to be a nice straightforward 3-cost character to play, which means you can concentrate all your efforts on trying to memorise all of the text on the Loki card (my brain is hurting already just thinking about writing that character summary).

She has a little control with her size 2 throw, but really it looks like she has been designed to get into the thick of it (i.e. range 2) and get off attacks and throws consistently.  I like the flurry trigger on Dragon Fang, and pulling that off is going to feel great, especially if you also have Warrior of Legend activated for that sweet dice manipulation.  I can see her being used as a 3-cost gap filler in a number of lists really.

As regards affiliations, an Asgard affiliation works just fine, allowing her to remove a damage or special condition each round if you so choose.  Cabal works too, gaining her extra power if she gets damage through which she can use to fuel Warrior of Legend and Dragon Fang.  And Wakanda has good synergy too, allowing her to pay power for rerolls, thereby improving the chances of Dragon Fang‘s flurry wild roll triggering.  Avengers would work nicely too, giving her immediate superpower discounts.  She really does fit in anywhere, which I very much like.

On the team tactics card front, Odin’s Blessing has to be mentioned because she is Asgardian.  She can pay 3 power to reduce any amount of incoming damage to 1.  That being said, if you are running other Asgardian characters you may wish to save this card for them because once you have used it, it’s gone.  But, still an amazing card to have in hand which could save you in a tight spot.

Beyond that, the usual cards like Recalibration Matrix and Patch Up would be good to have.  But also, I thought, Battle Lust could be good to allow Valkyrie to roll extra dice when attacking, and increase the odds of triggering flurry on Dragon Fang.  As Valkyrie is going to be within range 2 of an enemy character for all her attacks and throws she would be a viable target for such cards as Disarm, One-Two Punch and Trip Up as well.

So what do you make of Valkyrie?  Is she worth her 3 cost?  Comment below!