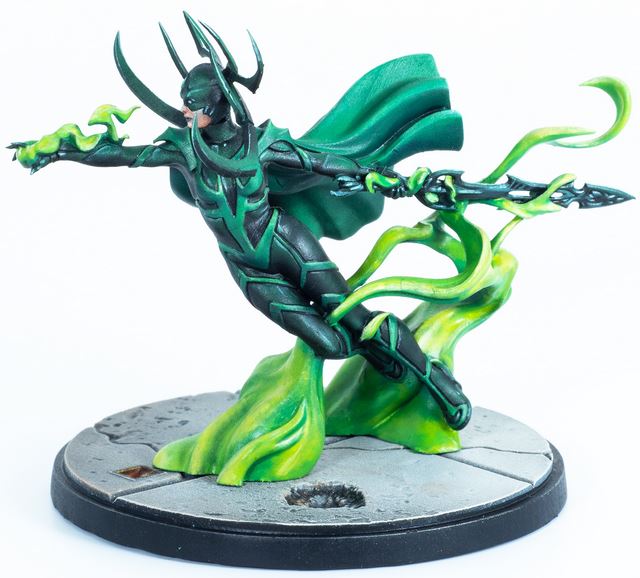 Hela is the last spoiled Asgardian for now, although we know more are coming because Angela has been shown on the spoiled Asgard affiliation card. Hela is an interesting character, and it is interesting to see how she has been translated into the game. So, what is the spiky-headed sort-of daughter of Loki all about? Let’s see.

STAMINA – Hela has got a nice 6 stamina, so she definitely has good staying power.

THREAT – At 4 threat, Hela should hopefully bring some good abilities to the table.

DEFENCES – Hela’s defences are impressive, with 4 dice rolled for each defence type. Above average in every way in this instance. It is going to take some effort and coordination to wipe her off the board.

ATTACKS – Hela’s first attack is a physical one and has the wonderful title Hel Forged Blade, and with a name like that it better be good! This attack is range 2, strength 5 and has a power cost of zero. After the attack resolves, Hela earns power equal to the damage dealt, and if she rolls a wild then she can make the target character bleed. Nice and straightforward, and solid enough for a basic attack.

Next is Claim Soul, a mystic attack with a range of 4, strength of 6 and power cost of 2. This is a nice combination of range, strength and low cost, meaning it is going to be affordable and executable quite a lot throughout the course of a game. The attack text states that after the attack resolves, if damage is dealt, Hela gains one captured soul token. These tokens feed into some of Hela’s later powers, so we will discuss their effects later on. So far though I am liking these character-specific tokens (Killmonger has his kill count tokens if you recall), as it is a nice little mini-game to be playing with your characters whilst the bigger game narrative unfolds.

Hela’s last attack is a physical attack called Rain of Hel (also a long lost Slayer album, maybe?). This attack has a range of 3, strength of 7 and power cost of 4. The rules text on this attack is very interesting. For starters, if the character has the bleed special condition then it does not count wilds as successes in its defence roll. Wow, Hel Forged Blade suddenly became a lot more powerful! Combine Hela with a bleed-inducing character like Baron Zemo and off you go partially-negating defence rolls across the board. This is also interesting against Hulk, who a player might leave bleeding in order to boost his damage and therefore his attack, something to consider anyway. Additionally, this attack can also allow you to trigger explosive if a wild is rolled, meaning that enemy characters within range 2 of the target each suffer a damage. Always nice to see as an attack ability, it works on Iron Man and it works here too.

SUPERPOWERS – First up we have an active superpower called Army of Hel which costs a deliciously cheap zero power. This superpower allows Hela to discard up to 3 captured soul tokens, and for each token discarded she gets to add one extra die to her next attack roll. Plus, if the attack bolstered by this superpower does damage then the target will gain the bleed special condition (hmmm, I’m sensing a theme here). Extra dice are always a welcome thing, and the chance to do more bleed to fuel Rain of Hel is no bad thing.

Next is the innate superpower Asgardian which, like her Asgardian counterparts, let’s her gain an extra power in the power phase; and Goddess of Death which nets Hela a captured soul token whenever a character is dazed or KO’d. Note that this is not characters that Hela dazes/KO’s, or just enemy characters, but includes allies as well. This is Crisis Protocol, dazes and KO’s are definitely going to be happening, so this is a nice effect that fuels Hela’s additional dice from Army of Hel and aids in Rain of Hel‘s ability to break through defences. Very nice indeed.

INJURED SIDE – There are a few changes on Hela’s injured side. Firstly, her stamina drops from 6 to a squishy 4, making her much easier to take down. But woah now, hold your horses! Don’t be rushing to get your Hela-chopping axe just yet. She gets a new superpower called Queen of Hel which costs a whopping zero power. This superpower states that if Hela has 3 captured soul tokens when she would be KO’d she can use this innate ability. Remove all damage and captured soul tokens, she is not KO’d. Good grief. This is like having Age of Ultron printed on Ultron’s character card but with a lower cost and with infinite reuse! Granted, you need captured soul tokens to fuel this superpower and there will be times where you will trigger this to skip out on being KO’d, then get immediately KO’d by a second attack, but there will also be times where you will pull this off multiple times in a game, and you will feel like the king or queen of all that you survey. All shall kneel before you as rivers of blood fill the battlefield and your enemies fall one by one, only for you to claim their souls in order to fuel your resurrective powers! Ahem. Apologies. Pulling this off is going to feel absolutely glorious, especially if you manage to do it at a critical time that spits in the face of your opponents strategy. It will be interesting to see how often this can be triggered in a game, and I am looking forward to seeing how the community gets on with this superpower and if it is as exciting to execute as it feels to me right now.

SUMMARY – Hela is…….(wait for it)……..Hela good (I’m so sorry)! She has solid defences all round, and a fun synergy cycle of bleed and capturing souls. Her in built resurrection is just going to be so fun to pull off, and getting a bonus when other characters are dazed or KO’d is going to be a fun addition to the usual turn sequence. I think I will really enjoy playing as Hela, but then again I have no tactical power and am all about appreciation of theme, particularly theme expressed through game mechanics, so Hela is right up my street.

It seems pointless to run Hela in an Avengers team because all her superpowers cost zero so you won’t be getting any discount. If you are running Avengers characters and want to pop her in regardless though then no harm done. Cabal is good, gaining power as Hela damages enemy characters, and Wakanda is good for rerolls as always. Asgard makes a lot of sense too, obviously, allowing Hela to heal or remove conditions.

Team tactics card-wise, as ever we must talk of Odin’s Blessing, but to be honest, considering Hela can resurrect herself you are probably best saving this for Thor, Loki or Valkyrie unless in desperate need.

For other cards, 2 in particular sprung to mind. Seeing Red could be good as Hela will gain a captured soul token for the dazed/KO’d character, and then can spend 3 power for a “free” attack against the dazing/KO’ing enemy, and can use the captured soul token just gained for additional dice if need be. Also, Sacrifice synergies with her nicely, she can preserve an allied character by becoming the target of an attack, then if this attack dazes or KO’s her she can (hopefully) resurrect with Queen of Hel. Nice.

So, what do you make of Hela?  Will she make it onto your roster?  Comment below!