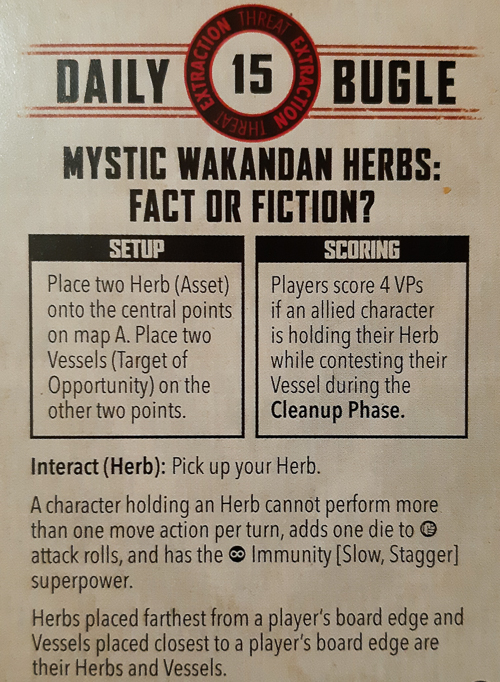 The Mystic Wakandan Herbs extraction crisis card comes in the Black Panther/Killmonger expansion, and the reason I would like to talk about it first is very simple – I absolutely love playing it! So, let’s dive in and see what is involved in playing this extraction objective, what characters work well with it, and what team tactics cards can aid you in your quest for battlefield dominance.

SUMMARY – As can be seen, this is a 15 threat crisis card, meaning that teams are going to have a smaller figure count (at the moment typically around 4 or so).

This crisis uses Map A for the objective layout, where 2 herb assets are placed on the central points of the map, and 2 vessels (targets of opportunity) placed on the other 2 points. The mission is to go across the board, pick up your teams herb (the one farthest away from the side of the board on which you start), and drop it off at your vessel, (the one nearest to your side of the board).

If you are fortunate enough to have a character holding the herb whilst contesting your teams vessel during the cleanup phase then congratulations, you just earned yourself 4 victory points!

Easy enough, you may think, but no, pick up your teams herb (spend a power when within range 1 to interact with the objective) and the character carrying the herb is now reduced to being able to take only 1 move action per turn. But, on the plus side they get to roll 1 additional dice when making attack rolls, and are immune to the slow and stagger special conditions.

As soon as you pick up your herb you are going to be a target for every enemy character on the board. The last thing the opposing team wants is for you to make it across the board safely whilst carrying that herb, and so they will hit you with everything they’ve got. Unfortunately, the quickest path from the herb pickup point to your vessel is right through the middle of the board. So, do you play it safe and take longer to reach the vessel by sticking to the board edges, or do you just go straight through the middle and hope you make it? Let’s get into the strategy of this crisis card by seeing what characters are good options for being a herb runner.

Obviously the more movement a character has, the faster they are going to be able to get to the herb and the vessel, and the less time they are going to spend in the firing line of enemy characters. So, we’re looking at the long-movers (not the windy-man – there’s your Mighty Boosh reference for the day) which as of this article getting uploaded are Spider-Man, Black Widow, Baron Zemo and Black Panther.

Now, anything which lets these characters do additional moves outside of their 2 actions per activation is going to be super valuable in getting you those herbal victory points as soon as possible. To my mind, this makes Baron Zemo and Black Panther stand out above Spider-Man and Black Widow, because they have additional movement built into their character cards. If Baron Zemo does a Steel Rush attack then once it resolves, even if damage wasn’t dealt, he gets to advance medium, meaning that Zemo can get a long move, a 7 dice attack (the herb adds 1 dice to a physical attack, remember), and a medium move whilst carrying the herb. Black Panther, on the other hand, can do a long move, then Pounce to throw himself short, just make sure there is no terrain or enemy characters in his path, as this will reduce how far he can travel.

As a bonus to the above, Red Skull is very handy to have when playing this crisis card, as his 3 cost Master of the Cube ability lets him place a character within range 4 of him at a location within range 2 of its current position. If you can get Red Skull into a good position on the board you can chain firing off this ability with the movement shenanigans of Baron Zemo and Black Panther outlined above and be on your vessel in no time.

Personally, for this style of play I like Black Panther the best, just because his Vibranium Armor makes him difficult to drop.

But, it may be that you are in no rush to get those victory points, instead focusing on other objectives and saving the herb for late game, in which case you may wish to tank it. By this I mean getting a bigger, slower character to head for the herb, someone who can take a lot of big hits and slowly make their way across the board, doing damage as they go. In your mind you should be seeing a large green angry being right now. Yes, you could run Hulk, even though he only moves short. He has a 3 cost Gamma Leap which lets him move to within range 2 of his current position, plus his huge base size makes him move quicker than you might think. Hulk can just lumber up to the herb, and roll his way across the battlefield, making big attacks as he goes and eventually making his way to the vessel. Just be mindful of the board layout, the last thing you want is a huge attack from Iron Man or Captain Marvel wiping Hulk out before he has ditched his herb.

Due to his defensive prowess Captain America is also a viable option, as it will take quite a bit of work to take him down.

If you are running Hulk then the Gamma Launch team tactics card is really helpful. If you can’t recall, it allows Hulk to spend 3 power (affordable from turn 1) to place a character within range 2 of him to within range 5 of its current position. This is a great turn 1 play and will get you to within a hairs breadth of your herb straight away. If you can then use an in-character ability such as Black Panthers Pounce on the next activation then you can have herb on hand and be on your way to the vessel before the end of turn 1.

Speaking of cards that can get you where you need to be quicker, Drop Off is good as it allows you to use a flying character to move your herb runner, potentially getting them closer to the herb or vessel.

Other tactics cards that help would be Avengers Assemble, but would require you to run an Avengers character and affiliation. This card allows all Avengers characters to pay 1 power to advance short. Hey, every little helps! If you are running Cabal then Cosmic Invigoration lets a character have a second activation within a round, at the risk of a little damage. This means an additional 2 actions which can be good to either get you to the herb, or get you to the vessel when carrying the herb.

There are other cards that provide protection too. If running an allied Venom then Lethal Protector can redirect an attack from your herb runner to Venom. If your character is ailing then Mission Objective will let you pie the herb off to another allied character, and Patch Up can be used to heal the herb carrying character if need be. Also Recalibration Matrix could be a lifesaver if you make a poor defence roll with the character.

As well as this, Captain America and Okoye’s ability to protect their allies can be really useful if you keep them within the required range of the herb runner.

Now we get into “big meanie” territory – what can you do to stop your opponent from completing this objective? Well, you can’t interact with their herb or vessel so there will be no picking it up and running away. So, anything the pushes or pulls the enemy herb character is going to be ideal.

Additionally, anything that gets you extra dice for attacks or robs your opponent of defensive dice is going to be great in bringing the runner down. So, cards such as Uneasy Allies (if running Venom and Spider-Man), One-Two Punch and Disarm. Battle Lust is particularly nice as it allows an attacking character to gain extra dice, but also push the target character away short once the attack resolves, a bit of damage and a bit of control, very nice.

Last of all lets have a brief chat about which secure crisis cards this teams up well with. Personally, I really like it with Gamma Wave Sweeps Across Midwest as this means you will have a nice cluster of action in the middle of the board, and this makes for interesting interactions as the herb runner passes through. I also like it with Riots Spark Over Extremis 3.0 as this gives good board coverage, meaning that there is always something going on somewhere.

So, what do you think of this crisis card? What cinematic moment have you had playing it? Comment below.