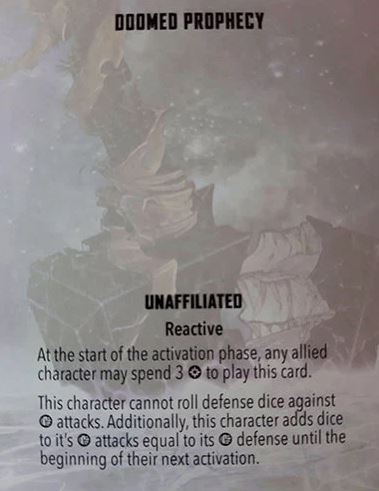 With the recent release of the Asgardians and the Vision/Winter Soldier pack (not that this has made it’s way to the shores of Old Blighty yet alas) we have had a glut of new team tactics cards made available to us. In this article I would like to talk about Doomed Prophecy as this looks to be a very interesting card indeed.

This card has been immediately errata’d, and should say the following:

The first thing to note, and it is an important thing, is that this card absolutely has to be played at the start of the activation phase. This is after you have gained all of your power and resolved any power phase effects, and just before you commence activating your first character. So, if you are playing this card you should have a clear view of who you want to play it on and what you want to accomplish this turn. The caveat is that your opponent will also know this, and if the target character is not activated first, your opponent will have a window in which they can fpcus physical attacks on the character to try to take them out before they activate.

So, you’ve spent your 3 power and declared your target, what do you get? Well, what you don’t get is any kind of physical defence. Ever. As soon as you target a character with ths card they are done on the physical defence front. On the plus side, all those physical defence dice which the character just lost now get added to the dice pool for all their attacks until the next cleanup phase. That’s 1 activation phase. 1 round. 1 Round to get in as many attacks as possible with all those extra dice, but also the rest of the game to be without any defence dice.

Playing this card at the right time is going to be key. What you don’t want is to play it on a perfectly healthy character because the odds of them getting wiped out once this card is played are high. Timing it so that the target character is almost dazed or K.O’d would be wise, but be wary of targeting enemy characers who can counter-attack and wipe your character out before they get off their second attack.

So, what characters would be good targets for this card? Well, if you are going to lose all of your physical defences then you want to maximise from this loss as much as possible, this means that the higher the characters defence pool the better. This will mean you can get lots of lovely dice to go with those attacks. Also, you will want to be firing off as many attacks as humanly (or otherwise) possible to squeeze as much as you can out of this card before your opponent swings at you with a physical attack and takes your character down, so characters who can double-down or chain into additional attacks are a worthy consideration.

Baron Zemo could be a good target. True, his physical defence is only 3 (which isn’t 4), but he has the long movement that can get him to an enemy character who you want to attack, and his Charge can get him there with a double-attack left over for maximum damage. Ideally you could pull off a double Steel Rush for the cost of 4 power and 2 attacks of 9 dice each. If you manage to take someone down on the first attack then Zemo gets to advance medium ready for another attack, and hopefully another takedown – that is some serious ground coverage and attack power! Best of all, any spare power can be used to pay for Zemo’s rerolls, really making sure that the damage gets through.

Captian America could be another good option. His Shield Slam attack would get to roll 10 dice in total for the cost of 2 power, however it is his Shield Throw that tickles my eyes – 8 dice in total isn’t humongous compared to what is possible with this card, but 8 dice means a good chance of rolling a wild. Roll a wild and you will get to do a second Shield Throw attack on another character within range 3 of the target that also ignores line of sight and cover. Pull this off twice and that is 4 8 dice attacks heading to 2 enemy characters. Beautiful.

If you’ve got all the power in the world and you are runing Crossbones then you could pay 2 power for Overpower, pay 4 for to add 3 dice with Haymaker, plus the 4 dice from Doomed Prophecy, making for a total of 12 dice – no small thing. This is dependent upon being powered up and also running Crossbones, so i’m not sure how likely this will be to trigger.

Hela’s Rain of Hel attack would also allow a big swing, 11 dice in total, and the possibility of dealing damage to surrounding characters. Best of all, if the target character already has the bleed special condition then wilds in the defence roll don’t count! Plus, Hela can negate the negative effects of Doomed Prophecy by using Odin’s Blessing to reduce any incoming damage to only 1, and by spending 3 claimed souls whilst on her flip side to avoid being K.O’d.

Just for the heck of it, why not try Doomed Prophecy on Hulk? That is 10 dice minimum on Hulk Smash, with the potential to go up to 16 if he has maximum damage on him! Iron Man’s Homing Rockets attack is another viable target (9 dice), as is Killmonger’s Black Op’s Strike (11 dice, more if he has a kill count token or is doing a second attack on a character).

M.O.D.O.K’s Doomsday Chair attack would get to roll 9 dice, and this attack allows an automatic second attack on a different target within range 2 of the target character, meaning if M.O.D.O.K doesn’t move he can potentially get off 4 9 dice attacks in his activation – big money!

Okoye’s Vibranium Spear Thrust would allow 8 dice to be rolled, with pierce breaking through some defence, and a wild roll netting you another Strike attack. Thor’s standard Strike would allow 10 dice to be rolled, and allows a good throw of the target character, and his Hammer Strike would let you roll 9 dice, which isn’t spectacular compared to some of the attacks we have looked at already, but this would be over range 5 which would be great.

Ultron has Metallic Fury which would allow an 11 dice roll which is tasty. The good thing here is that Ultron can resurrect with the Age of Ultron card and get back to his healthy side. The problem is this is 2 cards in your team tactics roster, and with only 8 to choose from space will get tighter and tighter as more cards are released.

Valkyrie’s Dragon Fang is much like Okoye’s Vibranium Shield Thrust in that it has the flurry wild effect, allowing an additional Strike attack. A 10 dice attack wth the potential for a subsequent 8 dice attack twice over is no small thing! Damn Valkyrie is attack-y!

Venom could also be a good target as his We Are Venom attack would get to roll 11 dice, and he would get to heal damage equal to the damage dealt, thus keeping him in the game a little longer. Venom also stops the opposing player from modifying his dice when defending, giving extra advantage for your attack. Along a similar vein is Vision’s Synthezoid Avenger attack which would roll 9 dice and totally negate the defending characters critical hits.

Lastly, Winter Soldier’s Red Fury attack would roll 10 dice and lead nicely into a push and Assault Rifle attack which would roll 7 dice at range 5 and hopefully gain you enough power to do it all over again.

Doomed Prophecy has the potential to be a very powerful card indeed if played right, and I am looking forward to trying it out in a few games and seeing how it actually works beyond theorising.

These are just some of my thoughts. What do you think of Doomed Prophecy? Will it make you roster? Comment below.