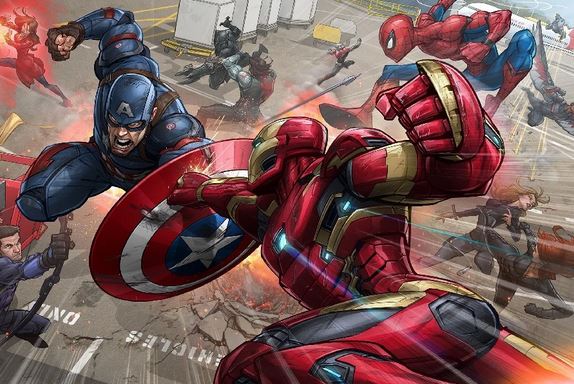 Although this game is won and lost on victory points which are gained through the control of objectives, combat is still a big part of it all. Indeed, wipe out your opponents team and you will claim instant victory, although this is a difficult thing to accomplish.

Given that combat is such a big deal it is good to know the order in which combat should be carried out so that any tricky character interactions can be resolved correctly and any cross-table arguments can be easily quelled. With this in mind let’s take a look at the attack process, see it in action, and then look at some trickier character interactions to see how they should be resolved according to the game rules.

AMG have split the attacking process in 14 steps (or 15 if you look on the back page of the ruleook), which sounds a lot, but in reality most of the steps are intuitive and will tend to get bunched together during play. So, let’s look at the 14 steps in sequence and briefly discuss each one:

1. Choose an attack and measure range. This makes complete sense (or should, if not then give up now!). If we want to attack someone then the first thing we need to do is choose what attack we want to use and see if we have the required range to an enemy figures or figures. At this point the rules also say we should be checking that we have the power to cover the cost of the attack (if required), because if not then the attack cannot be used. Note that in the Appendix A of the current rulebook, measuring range is in step 2 below.

3. Pay power for the attack. Straightforward enough – if the chosen attack has a power cost then pay it and be done!

4. Create the attack pool. The attacker creates a pool of dice equal to the strength of the attack, and resolves any superpowers or effects that add to or remove dice from the attack pool. You cannot reduce the attacking dice pool to fewer than 1 die.

5. Create the defence pool. The defender notes the type of the incoming attack (physical, energy or mystic) and creates a dice pool equal to the defending character’s stat for the defence type. Then any effects that add or remove defence dice are resolved. A defence roll cannot be reduced to fewer than 1 die.

6. Roll attacker’s dice. This one should really require no explanation.

7. Roll the defender’s dice. As above!

8. Resolve any criticals. First the attacker then the defender roll an additional dice for each critical hit in their respective rolls.

9. Modify your dice. First the attacker then the defender may use any superpowers, cover or other effects at their disposal to reroll or change their dice. Any critical hits rolled from this point on do not allow for further dice to be added to the pool.

10. Modify opponent’s dice. Once done with changing your own dice it is time to look across the board. First the attacker then the defender may use any superpowers or other effects at their disposal to force their opponent to reroll or change their dice. Again, any criticals in the roll do not add more dice to the pool. During this step there is something very important to note, and that is that although there is no limit to how many times a die can be rerolled, the same die may be rerolled only once per special rule or ability. So, if a superpower let’s you reroll 1 die you cannot use that superpower multiple times to reroll the same die.

12. Resolve effects that occur before damage is dealt. First the attacker then the defender resolve any superpowers or effects that trigger as a result of the attack. This could be something like a push or throw for example.

And that’s your lot. So, with these steps in mind lets now run through a basic attack.

Putting it into Practice

Let’s imagine we have a lovely Captain Marvel who is feeling particularly violent and wants to attack a naughty Black Panther. Let’s go through the attack sequence and see how it all resolves.

2. Declare a target. Captain Marvel declares Black Panther to be the target of the attack.

5. Create defence dice pool. Black Panther takes dice equal to the stat for his energy defence, namely 3 dice, to form his attack pool. He has no abilities that add or remove dice from his defence pool.

9. Modify own dice. As Captain Marvel is the attacker she commences modifing her own dice. She has no superpowers or other effects that allow her to change her dice results, so she must stick with what she rolled. Black Panther is part of a Wakanda affiliaited team, and so may use the affiliation ability to spend 1 power to reroll one of his defence dice. He rerolls a die with a hit symbol and now rolls a wild. Black Panther does not meet the requirements for cover and so does not gain the benefit of cover.

11. Calculate success or failure. The dice rolls are then compared. Captain Marvel has rolled 9 dice total in her attack roll, and has 2 criticals, 2 critical failures, 1 blank, 1 shield, 1 hits and 2 wilds, giving her a total of 5 attack. Black Panther has rolled 4 dice total in his attack roll, and has 1 wild, 1 critical a blank and a shield, giving him a total of 3 defence. As the attacking character’s total is greater than the defender’s total the target character sufers damage equal to the difference, namely 2.

13. Apply damage. 1 damage token is added to Black Panther’s character card. As Black Panther still has stamina remaining he is not dazed or K.O’d.

14. Resolve effects after damage. Captain Marvel then Black Panther check to see whether they have any effects or superpowers that trigger after an attack has been resolved. Captain Marvel’s Rocket Punch attack has a wild trigger called Stagger that states that after the attack is resolved the target character gains the Stagger special condition. As Captain Marvel rolled a wild in her attack roll she may trigger this ability, and so Black Panther adds a Stagger token to his character sheet. Black Panther does not have any superpowers or effects that would trigger after the resolution of this attack. This attack has now been fully resolved.

Whew, all done! Hopefully that was straightforward and easy enough to follow.

There are some characters in the current character pool that can be quite tricky in that they have abilities that let them duck out of attacks or can play with opponents dice. Let’s look at some of these characters and abilities and see where they fall on the 14 point attack process.

Captain America, Okoye & Red Skull – Each of these characters have an ability that redirects an attck. Cap and Okoye both have a Bodyguard superpower which let them become the target of the attack, and Red Skull has the Hail Hydra ability which lets an allied character take an attack targeted at Red Skull. In both instances the superpowers state that they trigger when a allied character (in the case of Cap/Okoye) or this character (in the case of Red Skull) are targeted by an attack. As such, these superpowers would trigger in step 2 of the attack process, when the attacking character declares a target for an attack.

M.O.D.O.K – This character has an innate ability called Psionic Force Field which states that when defending against an attack this character changes wild results in the attack roll to blanks. This superpower would trigger in step 10 of the attack process, when players may modify their opponents dice.

Spider-Man – This character has an innate superpower called Spider-Sense which states that when he is defending against a physical or energy attack, or making a dodge roll, he may reroll two of his dice. This would come into play during step 9 of the attack process as this would count as modifying your own dice.

Baron Zemo & Black Widow – Both of these characters have a superpower called Counter-Strike which states that after an attack is resolved they may roll 4 dice to try to deal damage to a character who has attacked them. This would trigger in step 14 of the attack process, as this is a superpower that can only be resolved after an attack has occurred.

Venom – This character has an innate superpower called Symbiotic Instincts that states that when Venom is attacking, the defending character cannot modify their defence dice. This would come into play during step 9 of the attack process, meaning that critical rolls in the defence can still be added and rolled, as this occurs during step 8.

Rocket Raccoon – This character has an innate superpower called Small Stature which states that Rocket always benefits from cover. This would be applicable during step 9 of the attack process, as cover is a form of dice modification. On a side note, any attacks which specifically state that the target character does not benefit from cover would neagte this ability, which is something I thought I had best mention to anyone reading this in case you weren’t aware.

The above is by no means an exhaustive list, and there are plenty of other superpowers, effects and abilities in this game that would resolve at different times during an attack. It is worth taking a little time to look over your character cards and see where different abilities and effects interact. For example, look at how Venom’s Symbiotic Instincts superpower interacts with Spider-Man’s Spider-Sense superpower. Spider-Sense allows Spider-Man to reroll 2 dice which would be modification of your own dice, step 9 of the attack process. However, Venom’s Symbiotic Instincts prevents defending characters from modifying their dice so, when being attacked by Venom, Spider-Man cannot use his Spider-Sense superpower which is just super-thematic!

I hope that the above has been helpful in going a little deeper into how attacks resolve in this game. As the game progresses and more and more characters are added to the character pool the interactions between characters will continue to expand and, potentially, get fiddly at times. Getting to grip with the flow of attacks is a good thing and will make for more fluid gameplay, meaning you can focus more on the fun than the rules! Thanks very much for reading and see you next time.