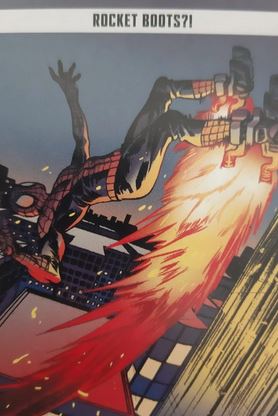 Thanks to the release of the Star-Lord pack we have some shiny new cards to play with. In this article I would like to talk about Rocket Boots?! as this is an interesting card.

Upon first read you may just pass Rocket Boots?! off as a card which you will never use. Why risk stagger and stun for the sake of being able to move 1 character slightly farther for a round. And that is an entirely fair observation. But bear with me for a few moments.

This is a real positive/negative risk/reward card, the benefit being that you can give a character the flight innate superpower for a whole round, with the potential to also get a short move for the character at the end of the round, the risk being that at the end of the round the character could end up with the Stun special condition, or at worst the Stun and Stagger special conditions.

Gaining the flight superpower is obviously beneficial for those that don’t aready have it (or its more structurally-oriented relative wall crawl), and would allow them to act as a size 5 character, meaning that they can take their ususal movement over any terrain that is up to size 5. On a board with a lot of terrain, or if terrain is not working in your favour, then this could be the card for you.

So, who doesn’t have flight and would benefit from it the most? Well, the first character to consider would be the smallest, as the smallest character is logically the one who would struggle the most to negotiate terrain, which as of the time of this post is Rocket Raccoon in all his size 1 majesty. Rocket has a medium move, but if he comes across any terrain of size 2 or larger then he is scuppered and has to reduce his move to short. Not ideal considering Rocket is all about the attacks. The negatives of Rocket Boots?! do not trigger until the end of the round so you could use Rocket Boots?! to give Rocket some much needed mobility over larger terrain and fire off his attacks, then deal with the negatives later on.

Another good target for this card would be flightless characters with long movement. Being able to move long over any terrain up to size 5 is one heck of a good thing and could be used to good effect to grab an objective (or two), or fire off a critical attack (or get the heck away from enemy characters of course). Characters like Baron Zemo, Black Panther, Black Widow, and the upcoming Proxima Midnight, Gamora and Nebula, all have a long move and a wide range of abilities. Rocket Boots?! would allow them a significant advantage when moving over terrain, meaning that they can be used more effectively for their activation.

The most interesting thing about Rocket Boots?!, to me anyway, is the timing of the resolution of the die roll. The card simply states that the die is rolled “at the end of the round.” If we look at the table from the rulebook appendix showing the stages of the cleaup phase, we can see that the effect of Rocket Boots would be resolved during step 2, when player effects are resolved (this has been confirmed by AMG):

Now we get to the interesting part. This is resolved before a character flips to their injured side and removes all tokens. So, even if the character you played Rocket Boots?! on failed their die roll spectacularly and ended up with the Stun and Stagger special conditions, if they ended up dazed over the course of the round it wouldn’t matter as they would lose the conditions when they flip to their injured side (the obvious exception being Hulk of course). This opens up some interesting tactics in that you could go for somewhat of a “go down with all guns blaizing” approach, using Rocket Boots?! to get a heavy hitter with low stamina remaining into position, fire off their attacks, leave them to get dazed, do the die roll, take the conditions (depedent on the roll of course), and then shed them once the character card flips. Of course, the disadvantage to this is that if the character is dazed they will not be able to take advantage of the potential short move afforded by Rocket Boots?! if they roll anything other than a blank or critical failure.

Lastly, since using Rocket Boots?! will give your character access to flight, by default it also gives you access to team tactics cards that work around the flight ability, namely the perennial turn 1 favourite Drop Off.

This combo’s amazingly with Groot and Rocket. Drop Off can be played on Groot to allow him to move and then place Rocket within range 1 of him. Rocket then gets a free 0 cost attack (which for Rocket is range 5). Groot can then continue his activation. When it comes to Rocket he will be in a prime location to take advantage of Groot’s personal bodyguard ability, meaning he can be protected from damage as long as Groot is alive. Once it comes to Rocket’s activation he can then fire off his attacks, plus play the Deadly Duo team tactics card to allow him to do 3 Plasma Rifle attacks on top of his usual activations. This is no small thing and a play worth considering. I hope to try it out in my next game to see how well it works.

Of course, you could also Drop Off any other character, effectively using Rocket Boots?! to move 2 characters across the board when combined with Drop Off. This opens up a lot of opportunities. For more discussion on this check out episode 20 of the House Party Protocol podcast where, quite coincidentally, there is a discussion on a tactic using Rocket Boots?! and Drop Off in a Cabal list which I was listening whilst already having this article mostly drafted. Spooky!

These are just some of my thoughts. What do you think of Rocket Boots?! Will it make it out of your deck box? Comment below.