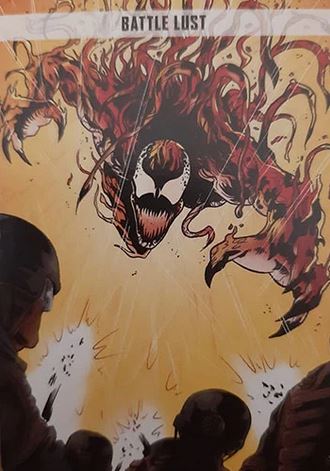 Battle Lust is a card which I seem to have been talking about a lot lately in my more recent character summaries.  It is one which I keep going back to for various reasons, and one which I would like to discuss a little more in this article.

It was released oh so long ago in the Black Panther & Killmonger pack, now a distant memory.  When you have a character pack that comes with such powerful team tactics cards as Wakanda Forever and Usurp the Throne it is understandable why, perhaps, Battle Lust may have been a little overlooked or undervalued by some.

Before we get into a discussion about this card, let’s see what it actually does.

So there are 2 costs to play this card. First, there is the actual power cost – power equal to the characters size must be paid. And this is the first reason why I like this card – it scales with character size. This makes it very flexible, as it can be played on any allied character whatsoever depending on your needs and circumstances. Maybe you need to get an attack off but all of your characters are low on power, well play it on a smaller sized character and it will cost less. Maybe you are flush with power on your large character and they are in a good position for a move and attack, well, play it on them and get all the dice. The majority of the characters released in the game so far are size 2, and 2 power for 2 additional attack dice puts it on par cost-wise with other team tactics cards such as One Two Punch.

The second cost to play this card is not so much a cost but a requirement of the card that must be met – namely, you pay the power to play the card at the end of a move action. Unless something is going very, very wrong for you there should be no time over the course of your game that your characters do not move. And this is another reason that I like this card – it is more often than not trigger-able. There are times over the course of a game where team tactics cards become unusable. You may not come into a situation where an affiliated card would provide any real benefit (I’m looking at you Crew of the Milano), or perhaps your characters with character-specific cards may have been removed from the board or just aren’t in a position to utilise their card, or things may just not have worked out as hoped. Not so with Battle Lust. There will always be numerous times over the course of a game where having additional attack dice will be handy – be it for doing extra damage, or trying to roll wilds to trigger abilities. Has anyone whilst playing a game of MCP ever said “urgh, extra attack dice, no thanks!”?

So it shows flexibility in power cost and dice gain by scaling with character size, and it is readily able to be used at multiple instances throughout a game. But there is more. On top of any extra damage or wild abilities triggered, if the attack does damage then the target character is pushed away short. The weakest attacks in the game are 4 dice attacks, so Battle Lust will turn these into 6 dice attacks if played on a size 2 character, the most common character size currently in the game. As many have seen when playing characters like Thor who have a 6 dice attack as their free Strike, this will get at least 1 damage through fairly often (for actual calculations of this may I direct you to the excellent Xavier Protocols blog written by Jacob Collins where dice maths reigns supreme). So even at it’s most base level the additional dice which you would gain from Battle Lust increase the possibility of the damage getting through and getting you the short push.

Which brings us to the last topic to discuss – who make for good targets for Battle Lust? Well, keeping on the theme of least gain, if you’re running Rocket Raccoon you can make Battle Lust cost a measly 1 power. True, you will only get 1 additional dice, but a Range 5, 6 dice 1 power cost energy attack with a chance to do a short push is not to be sniffed at.

Of course, additional dice on any attack is good, but Battle Lust work especially well on character who can combine a move action with an attack action. Characters like Baron Zemo, Killmonger, Thor and Valkyrie all have this ability, be it called Charge or some other variation. You can pay to use this superpower, take the move action, then play Battle Lust before the attack to get the dice gain and hopefully the push. Because you have combined a move and attack action you still have an action left to either move away or attack a second time. Although the temptation could be to go all in on a big attack and, indeed, depending on the circumstance in which you find yourself that may well be the best choice, this also works nicely when used to carry out an attack that gains the character power. The extra dice gained for the attack could net you back the power spent to play the card, nifty!

Lastly, there is also the joy that comes from rolling all the dice if you use Battle Lust on a size 4 character. A Hulk Smash! becomes a 12 dice attack, albeit at a cost of 8 power. If Hulk is loaded up on damage this becomes an 18 dice attack! A bit of a dream scenario, but fun to imagine. Battle Lust is also a thing of beauty if using M.O.D.O.K’s Doomsday Chair superpower. This would now roll 11 ice, and you would get to follow it up with a second 7 dice attack on a different character, and a wild on both attacks would throw out the Bleed special condition. Mmmmmmm.

And this is just scratching the surface of what Battle Lust can do. We haven’t even discussed the extra special condition possibilities of using it combined with Star-Lord’s Full Auto attack, or Winter Soldier’s Red Fury attack; but I will leave you to discover those on your own. Ultimately, my liking for Battle Lust boils down to the fact that it can be used on any character during any of their activations to boost any attack.

But, these are just some of my thoughts. What do you think of Battle Lust? Does it make it out of your deck box? Comment below.