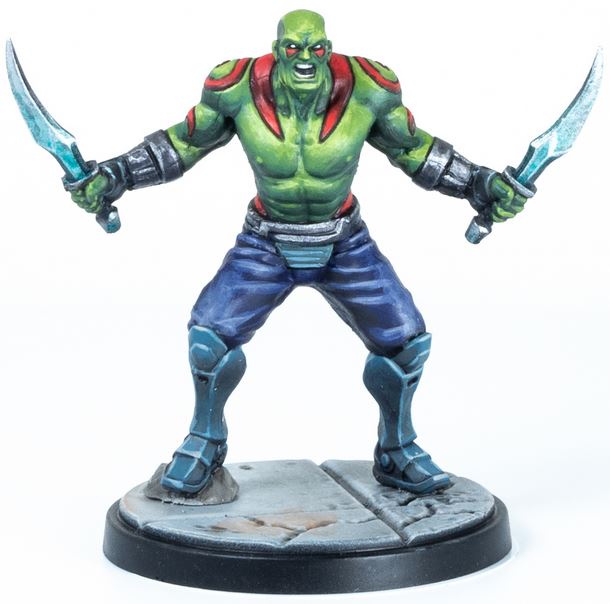 The dual-wielding creation of Kronos, father of Thanos is here.  With a title like “The Destroyer” Drax should be doing so serious destruction on the battlefield. Let’s see what the green and red make-’em dead guy can do!

STAMINA – Drax starts off with 6 stamina on his healthy side, making him (along with Star-Lord) just that little bit tougher than many other 3 threat characters.

SIZE – 2, fair enough and not much more to say.

THREAT – Drax comes in at 3 threat, keeping the low threat characters theme of the Guardians of the Galaxy going nicely.

DEFENCES – Drax rolls 3 dice for physical and energy defences respectively, and a mere 2 dice for mystic defences.  Worrying.  Lets hope he has superpowers to boost his defences.

Attack number 2 is called Headbutt and has a range of 2, strength of 4 and power cost of 2.  Roll a wild and you can give the target character the Stun special condition.  Plus, if the target character is size 3 or less, after the attack resolves it may be pushed away short.  4 dice is not a great deal for a costed attack, and it is unlikely that this will regularly do a lot of damage, but the main appeal of this attack, to me anyway, is the potential to Stun the target character and the automatic push.  There are very few characters in the character pool who have an automatic push (hello Shuri and Black Panther), and so this attack is a nice option for a little control if Drax is in position and you are in need.  Nifty.

Drax’s last attack is called Titan Killer and has a range of 2, strength of 3 and power cost of 3.  What the heck?!  It costs 1 more power to roll 1 less die than Headbutt?!  But, you get to add 1 die to the attack roll for every 1 damage on Drax, and roll a wild and you will get to throw the target character away short if it is size 4 or less, before damage is dealt.  An interesting attack, but not one I am altogether convinced will be as damaging as it might first seem.  We have seen a similar(ish) type of thing with Hulk, how hurting him only powers up his attacks, but with Drax it feels like it is going to be a real balancing act to keep him hurt enough to make this attack worth the cost, but not so hurt that he will get floored by the next 4 dice attack that comes at him.  But, pull it off and you will get an 8 dice attack for 3 power, not too shabby!  A real quandary and I think it is one which we will just have to wait and see how it plays on the table.  But that throw is truly delicious.  Currently only higher threat characters like Thor and Hulk have access to size 4 throws, so to see it on a 3 threat character is wondrous and opens up some nice possibilities.

Let’s leave it there for now and take a look at Drax’s superpowers.

SUPERPOWERS – The first superpower to look at is an active one called The Destroyer which has a cost of 3 power.  This superpower allows you to choose a piece of interactive terrain or enemy character of size 3 or less and within range 2 and throw it short once per turn.  A straightforward enough throw, but having it as size 3 instead of 2 is a nice touch.  Being able to have access to 2 throws on a 3 threat character is very nice indeed.

Drax’s second superpower is reactive, is called Driven By Vengeance and has a power cost of 0.  Warning – there are some Loki levels of text about to appear so make sure you’re not reading this whilst half asleep or on the toilet because you will end up with a dead leg.  So, first off this superpower can be used when Drax is damaged by an enemy attack.  When he is you can then place a vengeance token on or move a vengeance token to the enemy that caused the effect.  Subsequently, when Drax targets an enemy character with a vengeance token on it with an attack he rolls 3 additional attack dice.  After the attack resolves the vengeance token is removed.  Wordy, so let’s break it down into parts using that most corporate of formatting devices – bullet points:

That’s part 1 of the superpower.  Part 2 comes into effect when attacking that enemy:

So, an interesting superpower indeed, and very nice to have it for free. Again, though, it is going to be a bit of a balancing act – getting Drax damaged so he can use this superpower, but trying to ensure he is not damaged all the way to being dazed or K.O’d. Still, what fun when you can pull it off! I think the thing I am most excited for here is an 8 dice Blades attack for 0 power! If you can get the perfect conditions and get 5 damage on Drax then his Titan Killer attack will roll a whopping 11 dice, and for the cost of a mere 3 power. However, your opponent is most likely going to know about this superpower and will either spend their time not attacking Drax, or just pushing him or throwing him out of the way. Still it is a fun mechanic and one which I will most certainly try in my games.

The last superpower to consider is called I Can Take It and is innate. Just like the Black Order characters, when Drax would take any amount of damage from an enemy effect he reduces the amount suffered by 1 to a minimum of 1. Very very nice for increasing longevity and adding a little extra toughness, and an additional factor to take into consideration when trying to balance Drax’s damage with his attack strength.

INJURED SIDE – No changes on the injured side.

SUMMARY – I think the things that I like most about Drax are his Blades attack for its Bleed synergy and his Headbutt attack for its guaranteed push. I am not entirely convinced by his Titan Killer attack. I think that in ideal conditions (i.e. with decent damage on Drax and with a vengeance token on the enemy character) it will be amazing, but I think I will be reaching for Blades and Headbutt more than Titan Killer. Then again I could be completely wrong and when I play him Titan Killer could be the divine ambrosia, I will have to wait and see. He clearly wants to be in close doing attacks, as all his attacks and even his throw are all restricted to range 2. As such, he is very likely going to be getting damaged, which then feeds back into his abilities.

As far as affiliations go Drax is a listed Guardian of the Galaxy. Although he has rerolls built in to his Blades attack, that’s all he gets. The Guardians rerolls from Winging It tokens will be fantastic if you can get the perfect setup for a Titan Killer attack.

Wakanda would add consistency to his attacks and defences, but he is pretty tough already and if he wants to do more damage he can just add dice using his Driven By Vengeance superpower; still, Wakanda is worth a shot. An Asgardian affiliation would add to his toughness which is fine, and an Avengers affiliation would only give you a discount on The Destroyer. But if you are running an Avengers affiliation you likely already have access to lots of decent throws so Drax may not be the unaffiliated character you want to be using.

I think Cabal will be where Drax shines the most. He is so attack focused and that’s what a Cabal affiliation is all about. Running Drax in Cabal will have him sitting on a nice nest of power which you can just keep dumping out onto his throw and Titan Killer, and even Headbutt if you find yourself in need of a bit of control.

As for team tactics cards, if you are running a Guardians of the Galaxy affiliation then Drax would benefit from Crew of the Milano which would allow Drax to remove all special conditions from himself and be immune to all conditions for the rest of the round. Nifty in a pinch.

Unearthly Rage is a card which comes in the Drax/Ronan box and states that during a characters activation it may spend 2 power to play this card. This activation, if the character is within range 2 of two or more enemy characters whilst making its next attack it adds 2 dice to the attack roll. This is on par with other 2 power for 2 attack dice cards like One Two Punch, and would feed nicely into Drax’s desire to attack, and could pump his Titan Killer attack up to even more epic levels, as well as getting him extra power from a Blades attack.

No Matter the Cost is another card from the Drax/Ronan box, and is a card which I am really looking forward to playing. This card allows a character to suffer 1 to 3 damage when declaring an attack action, and in return the character reduces the power cost of the attack by the amount of damage suffered. So, Drax could trigger Titan Killer for free by taking 3 damage, and that would also mean that he would be rolling an additional 3 dice for this attack. Plus, he could do this turn 1, making him a viable target for Drop Off if you were so inclined.

Cards that give characters additional movement could be good for Drax so that he can get into position for a double attack. If running an allied M.O.D.O.K then A.I.M Lackeys would be an option, as would Tactical Analysis.

Drax’s attacks are all physical, and as he has 3 physical defence, so he could be a good target for Doomed Prophecy, making his attacks strengths of 8, 7 and 6 respectively. With 5 damage on Drax and a targeted enemy with a vengeance token Drax could be swinging in with a Titan Killer attack with a strength of 14 dice! And because of his I Can Take It superpower any incoming damage from enemy effects is reduced by 1 to a minimum of 1, making him a bit tougher than many other characters when rolling no defence dice.

Field Dressing also synergises nicely with Drax as it gets him to the exact damage level which he wants to be at for Titan Killer. As a reminder, Field Dressing allows you to remove a dazed token and 1 damage from a character, which would leave Drax at 5 damage – perfect for those Titan Killer additional dice! Regulating the damage on Drax can also be accomplished using such healing cards as Medpack and Patch Up.

So, what do you make of Drax?  Will he make your roster? Comment below!