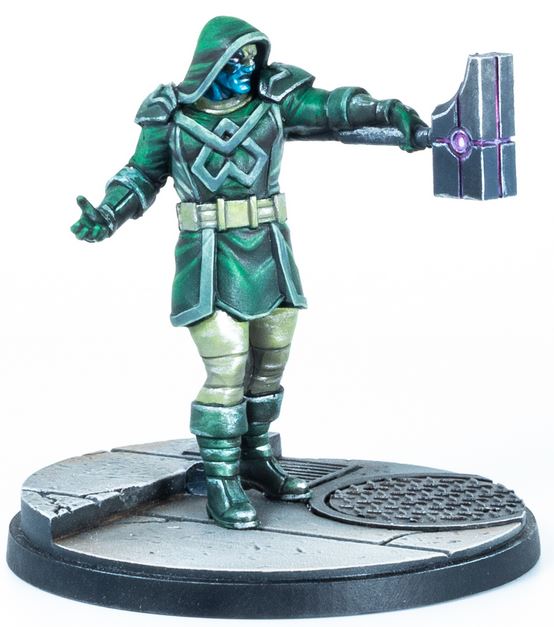 Ronan the Accuser stands accused of being released this month. It’s time to stock up on green paint and don your hammer-proof armour. So what does this very verdant vilifier bring to the table and, perhaps more importantly, was he ever in a fraternity; and, if so, did people call him Bronan? Let’s see.

STAMINA – Just like his box companion Drax, Ronan has 6 stamina.

MOVEMENT – Medium, very nice considering he has a 50mm base. Think Doc Ock, and we all know mobile he is don’t we? No? GO PLAY WITH DOC OCK YOU MONSTER!

THREAT – 4, so hopefully Ronan will be bringing some good skills to the table.

DEFENCES – Ronan rolls 3 dice against physical attacks, but ups his game a little for energy and mystic attacks, with 4 dice rolled for each. High energy defences are rare in this game, so a 4 energy defence is very nice to see.

ATTACKS – Ronan’s first attack is a physical strike which is aptly named Strike. It has a range of 2, strength of 5 and power cost of 0. As usual, after the attack is resolved Ronan will gain power equal to the damage dealt. Additionally, roll a wild and you may throw the target character short before damage is dealt, if it is size 4 or less. This attack is straightforward enough and we have seen many like it in the game since its release, but the addition of another size 4 throw to the game is very welcome indeed. With the upcoming release of Black Dwarf we will have another size 4 character in the game, and the Black Order look to be a powerful group, so this throw will be a nice little counter to Black Dwarf, as well as M.O.D.O.K and Hulk of course. And everyone else. Let’s move on!

Attack number 2 is an energy attack called Universal Weapon, which has a range of 4, strength of 5 and power cost of 0. If this attack deals damage than after the attack is resolved the target character gains the Shock special condition (their attack dice pool is reduced by 1). Additionally, roll a wild and you can push the target character away short if it is size 4 or less. Shock is a good condition to be able to dole out on demand, just as we can with Thor’s Hammer Throw, and the short push of a size 4 character is another welcome bit of control that Ronan has.

Ronan’s last attack is another energy attack, this time called Kree Justice. This attack has a range of 2, strength of 8 and power cost of 4. If this attack deals damage (pretty darn likely considering it has a strength of 8) then the target character gains the Stun and Stagger special conditions. Also, roll a wild and you can trigger Explosive which causes other enemy characters within range 2 of the target character to suffer 1 damage. This is a nice attack. The power cost is about right, it throws out 2 conditions, one of which is a strong contender for the worst in the game (Stagger), and there is a chance to do a little damage to any nearby enemy characters. When you consider that Ronan moves medium on a 50mm base he has good enough mobility to get him into a good position to fire off Kree Justice. Very nice.

SUPERPOWERS – Ronan’s first superpower is called Judgment, which is painful for me to type as we all know it should have an e in it after the g. Anyway, this is a reactive superpower with a power cost of 2. This superpower states that when Ronan or an allied character within range 3 of him is damaged by an enemy effect this superpower may be used. The character that caused the effect gains the Judgment special condition. And what, pray tell, is the Judgment special condition? Well i’ll tell you – a character with the Judgment special condition does not gain power when suffering damage from enemy attacks. WORST. CONDITION. EVER. We all thought Stagger was bad enough, but at least you could ditch it and then use all that lovely power for your abilities! One of the best things about this game is that if you get beaten down by an enemy then when it comes to your turn you are powered up and can unleash your wrath, but Judgment totally skips out on this whole aspect of the game. If a character with Judgment gets K.O’d then flips to their injured side for the next round then what will they be able to do? Maybe a move and/or a basic attack. Not what you want from a character who has just flipped over! Best of all there is no limit to how many times a turn this superpower can be used.

Ronan’s second superpower is also reactive and is called The Accuser. It has a power cost of 0 and states that it can be used if an enemy effect would cause Ronan to be dazed or K.O’d. Ronan immediately advances short and may make 1 attack targeting the enemy character that caused the effect, then he is dazed or K.O’d. This is a really cool superpower, giving Ronan the chance to go down swinging. When you consider that if he is getting dazed or K.O’d it is likely that he will be pretty powered up, and so he could advance into a position that puts him within range 2 of a few enemy characters, fire off a Kree Justice attack, and then hopefully roll a wild to trigger Explosive. A pretty great thing to pull off before going down. Plus he gets to do this twice over the course of a game, if he keeps getting attacked that is. However, this is something which your opponent will likely be aware of and may be able to work around by using ranged attacks, or just ignoring Ronan. Still, a short advance on a 50mm base, that’s pretty decent.

Last up we have an innate superpower which gives Ronan the Gem Bearer [Power] and Immunity [Poison] abilities. The Power Gem would up Ronan to a 5 threat character, but would net him 3 power each round, meaning he would be so very close the being able to trigger Kree Justice each round. Plus he would be able to throw out Judgment left, right and centre. Immunity to Poison is nice, as he won’t lose any power in the power phase due to Poison‘s effects.

INJURED SIDE – No change here.

SUMMARY – I really like the look of Ronan. He has good attack options with ranges of 2 and 4, he has a bit of control, and he has an absolutely punishing special condition that he can just pump out at will. It seems like he will be a force to be reckoned with when fielded and I am very much looking forward to trying him out. Throwing out Judgment and then moving in to clear up with other characters without fear of the repercussions will be way fun!

When it comes to affiliations, he is a listed Guardian of the Galaxy, and his attacks would certainly benefit from the Guardians rerolls as each attack has a good wild ability that you will be wanting to trigger as much as possible. A Wakandan affiliation would also help in this regard, but probably to a lesser degree (unless you are running Shuri of course).

An Avengers affiliation would reduce the cost of Judgment to 1 power the first time it is used each turn, and considering it is a reactive superpower this is a pretty big deal and something worth consideration.

An Asgard affiliation would be good for removing damage and special conditions, but then again you may be wanting to trigger The Accuser at least once, so maybe you don’t want to be removing damage each round.

Lastly a Cabal affiliation would be good as Ronan has a good range of strong attacks which are likely to be doing damage and gaining him that precious extra power to spend on Kree Justice and Judgment.

When it comes to team tactics cards Ronan would benefit from Crew of the Milano if you are running a Guardians of the Galaxy affiliation. This allows protection from special conditions for a round for all Guardians characters.

As for unaffiliated cards, anything that adds extra dice to attacks would be good, making it a bit more likely that you will get those precious wilds for Ronan’s throw, push and explosive abilities. So cards like Unearthly Rage or One Two Punch, and even Smash considering Ronan is size 3.

Field Dressing looks to be pretty darn glorious on Ronan. You could get him dazed so that The Accuser triggers, then remove the dazed token and 1 damage from him, get him dazed a second time and then trigger The Accuser again. Awesome!

So, what do you make of Ronan?  Will he make your roster? Comment below!