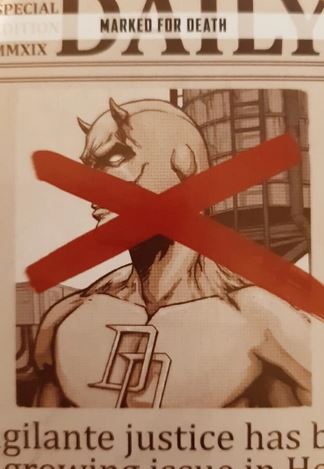 It has been a good few weeks since I posted anything due to employment and family health issues. But the paint on Black Dwarf is drying and Mrs. Kirby is sat watching TV, so it is time to turn my thoughts to MCP and get typing.

Marked For Death has been on my mind since it was revealed, and not just for its interesting name. Before we get into a discussion about this card, let’s see what it does.

For starters let’s look at the cost. 2 allied characters are required to be within range 5 of an enemy character, and they each pay 1 power. I am a big fan of cards which are able to be triggered regularly over the course of a game (such as Battle Lust – I had to mention it) and aren’t so restrictive that you only have a small number of opportunities to trigger them before they are just another dead card in your hand. Fortunately Marked For Death falls into the former category, as having 2 characters within range 5 of an enemy character should be happening fairly often (unless all your characters are cowering in the corners of the board), and a power on each of the triggering characters is fairly easy to come by.

I, quite possibly like many, perhaps initially glossed over this card for a few moments because of one word – stealth. Stealth is not at all a common ability in this game (yet), it being used by Black Widow (core set) to protect her a little from damage. As you start to read the card you think “yes, it’s nice and cheap”, then you read “loses stealth” and you go “meh, not for me.” However, it would be somewhat unreasonable to go into paying for this card thinking that you will trigger all 3 effects (although, of course, that would be the the most desired effect). So, really, what we need to consider is is this card worth it to trigger just 2 or maybe even only 1 of its effects?

So, let’s take them one by one and see. Would you ever pay 2 power to prevent a character from being able to modify or reroll their defence dice? Well, that would depend on the characters you see across the board and the affiliation being played. This card effectively neutralises the Wakanda affiliation ability and Shuri’s superb Upgrades superpower (only when it comes to defending), as well as totally crippling the Guardians of the Galaxy’s defensive rerolls through the Winging It tokens ability (other rerolls would still count though). One fun play could be to let your opponent ditch one of their team tactics cards to give one of their characters 3 Winging It tokens for rerolls, then when it comes to your turn play Marked For Death then lay into the character. The character can’t reroll any of it defence dice so hopefully you can take it out before it gets to use its tokens to attack back (if it hasn’t used them already of course). Your opponent has then wasted a team tactics card for no real benefit.

There are also some interesting interactions with other team tactics cards that your opponent may play. Inspiring Monologue? That’s a no-go! Psychic Fortress, Recalibration Matrix? Nope!

And not being able to modify defence dice would mean that the character would not get to benefit from cover. Significant if you are attacking a character who you really need to take down.

Next, would you pay 2 power to reduce a characters speed to short? I probably would in a pinch. Long moving characters are sometimes essential in this game, be it to run out and grab a vital objective to score, or in crises where you have a lot of board to cover. Being able to limit a characters speed to short for a whole round can be a pretty big deal when played at the right time and in the right circumstance. If you have played Black Panther then you will (hopefully) have seen how durable and fast he is. Now imagine a Black Panther who can only move short and can’t use his own leadership ability or his sisters Upgrades to reroll his defence dice for a round. Not so tough now is he! Ok fine – he still has Vibranium Armour, but still, a significant portion of his durability has been removed.

Last we come to losing and not being able to gain stealth. If your opponent is running a core Black Widow and is carrying a critical objective then fair enough, you might want to de-stealth her so that you can attack her from a long range, hopefully drop her, then move in to grab the objective.

I imagine the wording on Marked For Death is future-proofing for characters which AMG have upcoming who also have stealth, and/or the ability to gain it. As more characters with stealth are added to the game this card will only increase in value. I think that I will run this card in some of my games to see how often I use it. I like the movement and defensive restriction options that it provides and, like so many of the team tactics cards released to date, it could be the card that, potentially, is exactly what you need in a game to bring you victory. It will be interesting to see what interactions new releases will have with Marked For Death.

Update 16.08.20 – Well, Miles Morales Spider-Man has been released this week, and I have to mention him here because this card is pure anti-Miles. Miles has Stealth so this card can rob him of it for a round, his speed is long and so this card can be used to reduce it to short, and finally he will not be able to use his many defensive dice rerolls. It is looking like Miles will prove to be a very popular character due to his abilities (you can read more on that here), so running Marked for Death in your roster may not be a bad idea for a while.

But, these are just some of my thoughts. What do you think of Marked for Death? Does it make it out of your deck box? Comment below.