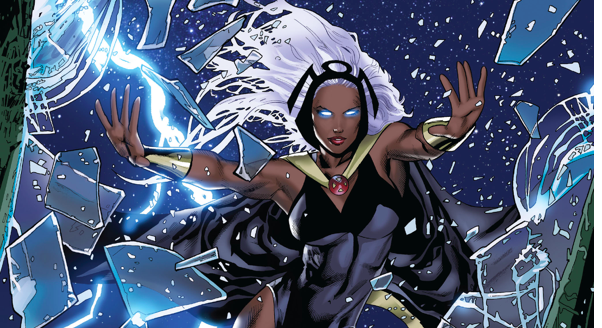 We are now past the released date of the long awaited X-Men! I’m absolutely delighted seeing everyone painted and building these models! Mine arrive Saturday from Discount Games Inc, I’ve been doing business with Jay for years now going all the way back to my Warmachine and Hordes days, He provides some of the best customer service of any shop owner in the country and isn’t just a online retailer he is an actual game store, but that hasn’t stopped me from theory crafting and playing some games with them! So today we are going to be taking a look at the Blue and Gold teams of the Uncanny X-men!

First up we are gonna take a look at my favorite of the two, The Gold team leadership attached to Storm! This one has has a ton to unpack from it. First of all if you are getting attacked from farther away than range two you benefit from cover. This by itself is a huge boost to your defense. If you have listened to The Danger Room or read any of Xavier Protocol’s posts going into detail about just how good cover actually is. The second part of this which is just gravy at this point but what I am truly excited for, is that once per round if you are not holding an objective token you can be placed within one of another character that is within range two of the active character. That is a mouthful of words right there. The quick and dirty of this you can move a large based character like MODOK up short and be within range two of someone like Hawkeye who has that range five attack and then get placed within one of MODOK and make two attacks turn one. I was playing testing a vastly inferior list to this and placed off of my Wong and ended up one rounding my opponents Beast with two shots from Hawkeye. Granted that was with some very good rolls on my part but I wouldn’t have been able to do that without this leadership.

The second one, The blue team’s leadership attached to Cyclops is a little less blatantly good but is more sneakily good. Once per turn you get to spend power off of any number of characters within range three. So if you have two characters within range three of Cyclops on turn two he has optic devastation online start of round two. Which off the top of my head the only other character with a beam five is iron man. I misplayed badly into this and ended up with three dazed characters because of this on gamma waves which put me in a very bad position. Personally I believe this is still the weaker of the two leaderships but it definitely has some play and opens up some fun possibilities!

Where to start building a roster with the X-men? There are a slew of characters now, and it is only growing with every passing month, thankfully we are getting a break in December to let some of our new players catch up and the players that have been with us since the beginning that haven’t been buying as things release also catch up.

Jumping right in to building our roster we have some characters which are vastly different than what we went with, with our Brotherhood roster. I reached out to someone with significantly more playtime X-men than I was able to get in and had him help me playtest a roster to bring to you all this week. Dyzard from the Danger Room who I linked earlier in the article was kind enough to help me out and provide a look into what he has built. He starts out with the standard core of the four X-men we have available, and adds in Mystique because of her amazing tactic card Deception. Everyone’s favorite two pointer in Okoye. One of the better three point models in the game and a real pain to kill, Taskmaster. The recurring threat that is Hela. A control piece in Ghost-Spider. The most interesting part in the whole list Black Dwarf, who I personally wrote off when I looked at this list for the first time, and when I played against it. He adds something you don’t really expect to this list. Which is a beefy character that if run with storm can leap frog to places you don’t expect.

We talked for a little bit about his card choices and there isn’t anything to crazy here. Children of the Atom was a interesting choice, but there is a lot of conditions running around in the game right now especially with defenders, and being able to dump them, and then get power back could bring a character like Wolverine into a very dangerous place power wise. I was a little shocked when I didn’t see an All you’ve got in there, or a medpack or patch up.

First Class is a neat card, it allows you to pick up extracts with your Uncanny X-Men without spending power the first time they interact. Which they are an incredible mobile team to begin with, lets you get them up the board and no have to spend that power early. Wolverine on Struggle for the Cube starts turn two with three power which is a Berserker Barrage if someone moves a character into the wrong position late into round two. Which can lead to the mutant blender that is Wolverine going crazy in the middle of your opponents squishy characters early. All in all some solid tactic cards that make it difficult for you opponent to take out certain characters.

In the crisis cards we get to see not one but TWO new crisis! Both of the new crisis made it into Dyzard’s list and one of them is even lower threat than the loving standard that the meta seemingly has gravitated toward at fifteen. The new fourteen threat Crisis, Mutant Extremist Target U.S. Senators! is a lot of fun and both the Brotherhood and Uncanny X-men can play it with their base four characters. It is a C set up much like Deadly Meteors. Meanwhile you have the other new Crisis that is set up in a B formation like infinity formula but plays like deadly meteors. I really like both of these.

Conclusion: Somewhere in the Middle

Personally, Storm is amazing, I love her leadership it is by far one of the most well thought out and unique ones we’ve seen so far. However, the supporting cast right now feels like its missing something. Cyclops is sneakily good and could steal a game with his leadership here and there. Beast feels really lackluster. He wants to be farther away to take advantage of Storms leadership, but a lot of folks will take advantage of the two energy defense and remove him that way. Wolverine feels really good. I don’t think they are bad, much like the Brotherhood, someone will do something with them, but I don’t believe they are quite in the league of Wakanda, or Defenders right now. I sound like a broken record so far, but I’m just not overly impressed so far, with these half released affiliations. The ones that are doing the best right now are the affiliations that aren’t shoehorned into four models where one or two feel just okay. Wakanda for example all four of their options feel really good. The argument could be made the Killmonger is the worst. Meanwhile in Defenders, Hulk is far and above the “worst” model, and even he is starting to see some play with the discovery of the Pentagram play as that is toyed with. I digress though.

X-men are not bad they are playable, So are brotherhood enjoy them, personally I don’t think I’m going to continue with either faction till they are fleshed out with the rest of their faction cards, for me its back to the drawing board and working on this Defenders roster

Till next time everyone! Drop me a line on Discord and let me know what you want to see next!