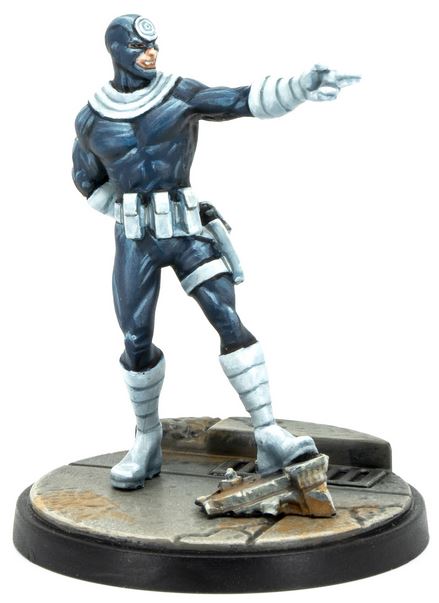 After what seems like several decades away from my keyboard I have returned triumphantly to discuss the next character in line, namely Bullseye. That’s all the intro you’re getting for now, let’s take a look!

STAMINA – Benjamin has a respectable stamina of 5.

DEFENCES – 3’s right across the board. So very, very average.

ATTACKS – Bullseye has 2 attacks, both of which are physical. The first is called Throwing Knife andhas a range of 4, strength of 4 and power cost of 0. As a little compensation for the weakness that is a strength of 4, the defending character does not benefit from cover. As usual, after the attack resolves Bullseye gains power equal to the damage dealt. Lastly, roll a wild and you can give the target character the Bleed special condition. I like the range on this, and denying cover is nice, as is throwing out Bleed. Still, not my favourite attack of all time, but that’s not to say that it won’t have its uses.

Physical attack number 2 is called Pin Cushion, and has a range of 4, strength of 5 and power cost of 4. Again, the defending character does not benefit from cover; also, after the attack resolves the target character automatically gains the Bleed special condition. Lastly, this attack has the Rapid Fire special condition, meaning that after the attack resolves you can make another Pin Cushion attack for free, as long as it targets the original target character. This seems quite costly for a 5 strength attack, even if you do get to do it twice and deny cover to the target character. I think I would rather save my power for Bullseye’s superpowers, speaking of which…

SUPERPOWERS – First up is an active superpower called Hit and Run, which costs 2 power. This superpower costs an action to use, and allows Bullseye to make an attack action followed by a move action once per turn. Always nice to see Charge, or a variant thereof, on a character card.

Next is a reactive superpower called I Never Miss (and I imagine around 70% of the people reading this heard it in a Colin Farrell accent). This superpower states that after an attack made by Bullseye is resolved, if no damage was dealt, then you can spend 1 power to make the target suffer 1 damage. I like that this allows you to get damage through no matter what, and it combos nicely with Bullseye’s free Throwing Knifeattack. 1 power for 1 damage is a fair trade, and you could even use this superpower to finish off a character with only 1 damage remaining, potentially gaining some control over an objective. Nifty, but not mind-blowing.

Last up we have Parting Shot, another reactive superpower, this time with a power cost of 2. This superpower states that after an attack targeting Bullseye is resolved, this superpower can be triggered, and you can cause 1 damage to the attacking character. Then, Bullseye may advance away from the attacking character short. A nifty bit of protection from incoming damage, and another way of throwing out a little chip of damage. I like that this gives your opponent an extra decision to make – do they really want to risk attacking Bullseye with their damaged heavy hitter and risk him or her getting dazed/K/O’d?

INJURED SIDE – Like people who only ever pay for things with their card – no change.

SUMMARY – I’m not blown away by anything on Bullseye’s card, but he seems like a perfectly fine character to field. I do like the notion of nipping Bullseye around and using him to chip away at certain characters, and at 3 points he can slide nicely into a team should you decide that this is something you want. It’s worth a shot at any rate, I mean – you’ve bought the model, you may as well use it.

AFFILIATIONS – Bullseye is a listed member of the Cabal and the Criminal Syndicate. As part of the Cabal Bullseye would gain power whenever he damages an enemy with an attack. How often this is likely to happen I don’t know, as his damaging superpowers wouldn’t count. As part of the Criminal Syndicate Bullseye helps out with securing and passing off objectives, and I can see him being used to dip in and out to do chip damage and help out with objective play.

Beyond this I think Bullseye would benefit from Captain America’s Avengers leadership ability, making his Hit and Run and Parting Shot superpowers cost a mere 1 power. This helps with getting more chip damage out and getting combined attack and move actions, which is no bad thing.

Running Bullseye in a Defenders team could be fun. He would get to tailor his attacks to the enemies weakest defence, and then give the Hex special condition to the target character, which denies them exploding criticals, which in turn helps with getting through their defences and doing more damage.

TEAM TACTICS CARDS – As a member of the Cabal Bullseye has access to Cosmic Invigoration, which would allow Red Skull to remove an activated token from him. Although I think that this card may be better spent elsewhere (MOOOOOOODOOOOOOOOOOK). But, getting another Cabal character to pay 3 power so Bullseye can benefit from Dark Reign and reroll attack dice against a specific character could be good, especially if there is an enemy you really want to take out and you want to know that if all your attacks and rerolls fail you can still get damage onto the character with Bullseye’s rerolls.

Moving on to the Criminal Syndicate Bullseye could contribute to All According to Plan to gain you priority. Additionally, Cruelty would give Bullseye access to the Twist the Knife attack which is a range 5, strength 5 mystic attack. This is a decent out of activation attack for the cost of 2 power. To give Bullseye a bit of protection you could also consider playing Shadow Organisation, paying 2 power to make enemy characters have to be within range 2 to target him with attacks for the round.

Acute Senses could be a good card to play on Bullseye. I is cheap, costing only 1 power, and states that enemy characters do not benefit from Stealth and Bullseye ignores line of sight when attacking during this activation. We have a few characters with Stealth now, and combining this with Bullseye’s attacks means that as well as the above the enemy character will no get cover. Pretty nice! In a similar vein to this is Marked For Death which requires 2 allied characters to be within range 5 of the same enemy character to pay a power each to cause the enemy character to lose Stealth, reduce its speed to short and lose its ability to modify or reroll defence dice.

As Bullseye can combine attack and move actions Hired Muscle might be a good card to keep in mind when playing him. He can spend 1 power to move each civilian token within range 3 of him to within range 2 of its current position. This plays nicely into the Criminal Syndicate’s objective play abilities, but note it only counts for civilians, so mileage on this will vary greatly depending on the crises being played.

Lastly, I quite like the Ant-Man and Wasp cards No Escape and Reversal on Bullseye, both of which allow 4 dice to be rolled against an enemy character, with 1 damage being dealt for each critical hit and wild rolled. It may not be the most optimal play, but it plays nicely into Bullseye’s theme I think.

Before signing off this article I would just like to give a little plug for Blackgate Games who are a UK based retailer who stock Crisis Protocol products at a great discount. Check them out if you are in the market for some new wares. Their website currently has a extra 5% off their already generous discounts when you spend £50 or more (easily done when it comes to MCP!). They also stock other products such as Infinity, Song of Ice & Fire and even (sickeningly) Star Wars Legion (urgh).

The Dreaded… Sin and Crossbones