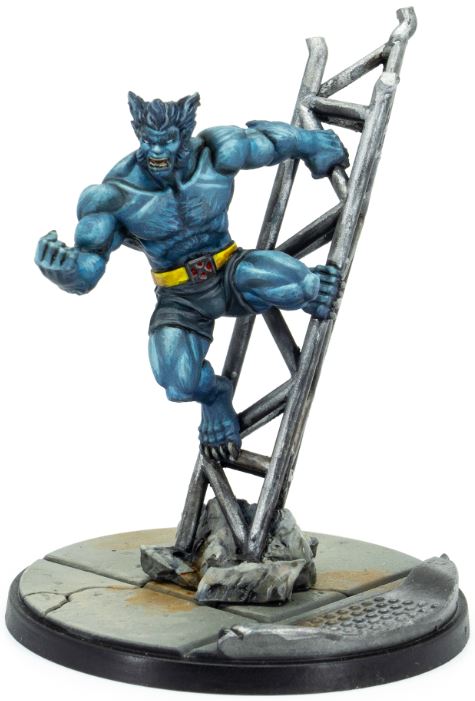 And now we come to it, the last of the X-folk for the time being. This mini was a joy to paint (except for the inside of that metallic column, urgh), but is Beast a joy to play? Let’s see…

MOVEMENT – Medium, but on a 50mm base, so fairly quick really.

ATTACKS – When it comes to attacking, Beast is all about the physical. His first attack is called Acrobatic Strike an has a range of 3, strength of 5 and power cost of 0. After the attack resolves Beast gains power equal to the damage dealt. Roll a wild and you can trigger Ambush which states that after the attack resolves you must place Beast within range 1 of the target character. This seems to be a decent enough basic attack with a good range, and built-in movement is a nice bonus; although I have no doubt that I will roll a wild whenever I don’t want to end up within range 1 of the target character.

Beast’s second attack is also physical and is called Animalistic Freestyle, which coincidentally is also how my rapping skills are not described. This attack has a range of 2, strength of 6 and power cost of 4. After the attack resolves the target character automatically gains the Bleed special condition, and Beast may advance medium. Roll a wild and you get to trigger Float Like a… which states that before damage is dealt you can push the target character away short if it is size 3 or less. It would be nice to see this attack have higher strength, but considering all the extra bits that come with this attack I don’t think we can complain too much. Automatic Bleed is nice (and is a nice bit of synergy with Hela), an optional medium advance is huge, and the chance of getting a push is lovely. If things go right with this attack it could do some serious work. I really like it and am looking forward to giving it a try out.

SUPERPOWERS – Beast’s first superpower is active, is called Baser Instincts (also the name of my upcoming rap metal album), and costs 2 power. This superpower lets you choose a terrain feature or enemy character within range 2 of Beast that is size 2 or less and throw it short once per turn. This is pretty much he lowest level throw you can get in this game, but a throw is a throw and is better than no throw. If I recall correctly this is the same as Valkyrie’s throw, and that seems to get used often enough, so no complaints here.

Next is a reactive superpower called Stars and Garters which has a power cost of X (gasp!). After Beast rolls defence or dodge dice he can spend up to 3 power. For each power spent he can reroll one of his defence or dodge dice. This is a nice bit of built-in Wakandan style re-rolling, and I like that you can scale it dependant on how desperately you need to get a certain result. I really like that this work for dodge rolls too.

Beast’s next superpower is innate and is called Disconcerting, Yet Provocative (which is how the early reviews have been describing my rap metal album). This superpower states that whenever Beast rolls dice, after the effect is resolved he gains 1 power if he rolled at least 1 failure. Heck yes. I love these Doctor Octopus and Shuri type superpowers where you get a power reward for certain rolls – it makes the sting of a failed roll a little more bearable, and can net a surprising amount of power over the course of a game. All hail the scientists!

Last we have the innate superpower Wall Crawler, and we should all know what that does by now (for anyone new, you can move your usual movement over terrain up to size 5 rather than having to climb over it short). Always nice to see and very thematic.

INJURED SIDE – Alas, once injured Beast’s stamina drops from 6 to 5.

SUMMARY – I like what I see on Beast’s card. He has lots of additional built-in movement, making him quite mobile, his attacks are solid, and he can boost his defences a bit with rerolls; plus he has some built-in power generation too – what a guy!

AFFILIATIONS – Beast is both an Avenger and an Uncanny X-Man. As an Avenger all Beast would get would be a discount on using his throw, it now costing 1 power instead of 2. That’s pretty good to be fair, but there are other Avengers who can take greater advantage of Cap’s leadership ability. Still, worth trying out i’m sure.

As an Uncanny X-Men character Beast has his choice of both the X-Men Gold (Storm) and X-Men Blue (Cyclops) leadership abilities. I think he benefits well from them both, with Storm granting him additional movement (or you could use him to move other characters around), and a bit of additional protection from attacks via cover; and Cyclops granting him somewhere to discharge any additional power to, or even take the power to pay for his big attack to get a load of free self and enemy character movement.

As for other affiliations I don’t think that any stand out as being magnificent, but I think Spider-Foes and Criminal Syndicate could be worthy of further investigation. Beast has the potential to build up quite a bank of power, and that could be spent on the Spider-Foes ability to reroll an enemy defence die. It’s not much, but it all helps. And as Beast has so much access to out of turn movement I think he synergises quite nicely with the Criminal Syndicate objective play.

TEAM TACTICS CARDS – When it comes to Avengers Avengers Assemble would grant Beast an out of turn short advance for 1 power, and Second Wind would allow him to pay 1 power to remove the Stun special condition and 1 damage. Both are valuable, but Avengers Assemble probably less so as Beast has a lot of movement shenanigans on his own anyway.

Along with all the new X-Men releases we also have a batch of X-affiliated cards. First up we have Children of the Atom which any Uncanny X-Men character can play. This card simply states that the character removes all special conditions from itself, and gains 1 power for each special condition removed in this way. This seems like a really great card – so many characters now throw out special conditions. It seems more likely than not that over the course of any game you will be able to play this card. Look at it this way – would you play a team tactics card that just said “immediately gain 1 power? Or 2? 3? I can’t really see myself not ever taking this card in an Uncanny X-Men team. Any power gained can go right back into Beast’s rerolls and throw, and if you are running the X-Men Blue affiliation you could use this to power an allied characters attack.

Next up we have First Class which can be played by an allied Uncanny X-Men character at the start of the Activation Phase. Once played, each allied Uncanny X-Men character does not have to spend power the first time they interact with an objective this round. Again, another really great card, perfect for those turn 1 plays where you don’t have much power but you are within reach of a few objectives. You can wander over to an extract objective, pick it up for free, and then saunter on over to squat on a secure. Lovely stuff! Especially nice for when trying to find that pesky Kree power core. Bear in mind this is restricted to only allied Uncanny X-Men characters, so any allied but unaffiliated characters on your squad won’t be able to make sue of this. Combined with Beast’s movement abilities, this could make for some really fun plays.

We also have To Me, My X-Men which can only be played by an Uncanny X-Men character with a leadership ability (so currently Storm or Cyclops). This character may spend any number of power to play this card. Then, for each power spent 1 allied Uncanny X-Men character may advance short towards the leader. This is very reminiscent of Avengers Assemble, but is flipped a bit in that only 1 character is paying for everyone to move. Still, very handy to have in a pinch, and could get you some serious points if used to play the objectives.

Acute Senses could be good for Beast if you find yourself in a situation where you want to do an Animalistic Freestyle attack to get some movement but you can’t draw line of sight to a nearby enemy. The card only costs 1 power and lets you ignore line of sight for all attacks this activation, so you could fire off your attack and get that medium move that you so desire.

I quite like Disarm with Beast. I suspect he will be moving around the board a lot, and will be building up a bit of a power reserve. This makes him an ideal candidate for contributing towards Disarm which requires 2 allied characters to be within range 3 of the same enemy character to pay 1 power each. If they do so then the enemy character rolls 2 fewer dice on all attacks this round, to a minimum of 1. Very nifty for irritating your opponent.

I guess that as both of Beasts attacks are physical we should at least consider Doomed Prophecy. This would make for 9 and 10 dice attacks respectively, but would leave Beast wide open to incoming physical damage for the rest of the game.

Lastly, if you plan on using Beast for objective play then you may wish to consider Hired Muscle which, for 1 power, lets you place each civilian token within range 3 of Beast to within range 2 of its current position. That’s seriously powerful.

Once more I would like to mention Blackgate Games who are a UK-based MCP supplier. If you like discounts then why not give hem a try, they’ll even price match. As I am feeling in quite a positive mood I shall even give you all a day off and not have a dig at Star Wars.