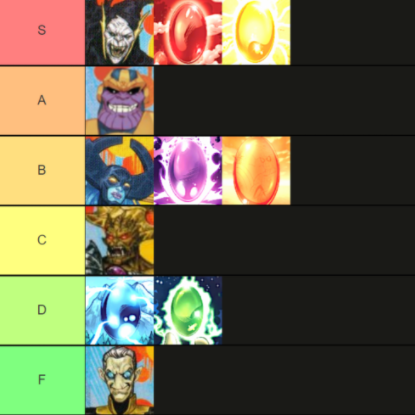 Another week, another Tier List. This time, Black Order! As you might have noticed from the thumbnail gems are included in the tier list. Normally I would not do this as most affiliations have 1-2 characters that can take 1-2 gems, but 3/5 characters here can take among them all the gems. So, for this episode at least, the gems have been honorarily made Black Order members. But enough quibbling over tier list rules, let’s get into the tier list itself!

Corvus Glaive – S – The terror of pre-banlist Season 3, Corvus is the consummate physical beater even without Drop Off. When you slap the Reality Gem on that bad boy, he can get to a stunning 7/8 faces of each die being successes (with the caveat that as long as you don’t get multiple skulls) and with Death’s Decree he can reliably Daze/KO 1-2 characters a turn if set up properly and sufficiently motivated. His defenses look inauspicious at first with 3s across the board but with the gem boosting his rolls and the flat damage reduction he is surprisingly tanky. On top of that, his synergy with Proxima is a must take in most Black Order rosters, condensing your 3 character team into 2 turns means you consistently get prio from r2 on even while dazing characters before they go. Corvus does get a bit pumpkin-like without the Reality Gem but thankfully outside of 14 threat you pretty much never even have to consider the possibility.

Reality Gem – S – The coolest gem if not the best gem. Turning a skull into a crit is so powerful. It works defensively and offensively to limit the floor of your rolls but this also works on single extracts where you’re crit fishing like Alien Ship or Skrulls, as well as the defense rolling secures like Origin Bombs or Mutant Madman. Also, important piece of tech, if you reroll the skull you’re counting as a crit into a non-skull, you can now pick a new skull in your roll to count as a crit. Insane on Corvus, solid on Thanos, should literally always be in your 10 when you’re playing Black Order or you’re not trying to win.

Mind Gem – S – The other contender for best gem alongside Reality. 1 threat for a bonus power/round and M.O.D.O.K.’s Bow superpower slapped on is already a good deal but on Thanos it hits a new level. His ability to use gem powers for free means between portals and this he becomes an obnoxious control piece that can shift a bunch of people all over the map. Someone finish their activation just out of range of Corvus? Portal Corvus forwards, Mind Gem the enemy even closer. Obnoxious heavy hitter threatening to ruin your day? Portal and Mind Gem them effectively a distance of a medium move and see if they can still do their job. Or, just wait until the end of a round with Thanos, and just yank multiple opponents off of every secure for a scenario advantage.

Thanos – A – Turns out, big purple chin man is key to a functioning Black Order roster. I’m sure some of you will be eager to question why the Mind Gem is rated higher than Thanos despite the entirety of the Mind Gem section talking about using it with Thanos, and the answer is simple – Thanos is kiiiinda overcosted. You’re paying a lot for his insane tank stats and his special gem rules and outside of those two aspects he feels a LOT like a 5 threat. That said, with the Mind Gem he becomes a very potent control piece in addition to his tank stats, and the soul/power gems make him into even more of a power battery to spam Unstable Portals and Death’s Decrees. His leadership is deceptively powerful too, if you can force a scenario split where both players are scoring equal amounts on board, and proceed to K.O. someone you can ride that lead out until the end of the game. And if Thanos gets Dazed you’re probably in an attrition matchup and lateish into the game where you’re probably willing to pay some health to ensure you take down the last few pieces your opponent has. Thanos is a very unconventional piece but nevertheless an important one for building a Black Order roster.

Proxima Midnight – B – Proxima Midnight is often outshone by her splashier husband, but she’s a solid piece in her own right. High mobility, high tankiness, a good mix of short and long range attacks, and generally low pressure on her power economy. She’s great for softening up targets for Corvus or going after him to clean up any characters that barely survived his wrath. She’s a character that just barely doesn’t make the cut by herself in a lot of my other rosters, just a rung below meta defining 3 costs like Shuri, Mystique, or Valkyrie, and in an affiliation where she counts towards she is a strong take. If you’re taking Corvus you should pretty much always be taking Proxima, you’ll rarely regret it.

Power Gem – B – 2 power per round for 1 threat is a nice deal on the Mad Titan which has a lot of ways to spend down. This obviously competes with the Soul Gem which does a similar job with the same cost, but the Power Gem is quietly consistent, giving you an extra Portal or Death’s Decree each round. You won’t always have room in your teams for these pieces but they’re important glue as you try and climb up the threat ladder from your 15 threat core team.

Soul Gem – B – Alongside the Power Gem, the Soul Gem is a quality power battery for Thanos if you have a threat to spare. The Soul Gem’s utility scales with enemies near to Thanos using superpowers so there needs to be some alignment in your opponent’s team and the crisis combination to out-shine the Power Gem. But when the stars align, you only need one superpower use per round for this to equal the Power Gem, and every superpower past that is just gravy. Again these are filler/glue pieces but very important to have one of these two in your roster.

Black Dwarf – C – Black Dwarf is an interesting character. The cheapest Size 4 character throw you can put on a team, extreme tankiness, and solid to above average to cost on r2 damage, and size 4 himself insulating him from throws. In the negative category is his extreme slowness – short move, no charge, no tech like aggressive to limit his sensitivity to pushes. Depending on the matchup he is often either oppressive or oppressed himself. And realistically you’ll only be playing him at 19 or 20 threat due to the almost non-negotiable 15 cost core of Black Order. He’s solid at holding up a flank versus an attrition team until Corvus/Proxima close out the other flank, then works as an ideal Mothership target to bring Corvus over to clean up. Take him when it makes sense but don’t proactively try and put him in teams otherwise his weaknesses will be quite painful.

Space Gem – D – Incredible effect but a super hard sell when the Mind Gem costs 1 and you can just move your target towards you. There has been some success with the Space Gem in Spider-Foes Thanos rosters (Roster Doctor episode on that soon) but this should be one of the first gems cut from your dedicated Black Order roster.

Time Gem – D – Cool effect but too expensive, notice a pattern? To me the lesson of the gems is that they work as 1 threat add-ons but 2 threat is just too much of an ask no matter how cool the power. As we mentioned before Thanos is super pillow fisted so can’t abuse a third activation for anything spectacular, and Corvus gets more mileage out of the Reality Gem. Unless you’re using the Time Gem for something silly like getting an extra move to retreat with after a Hired Muscle play then kudos to you but you’re probably better served by Okoye or the 2 threat character of your choice.

Ebony Maw – F – I still remember when Ebony Maw was initially spoiled and the internet was crying about how he power crept M.O.D.O.K.. Boy were they wrong. Ebony Maw is such a maligned character that I was invited onto the Morlocks to try and resuscitate his usage as he is one of the 10 least popular characters in the game:

He is just… not amazing, if you want to spend 5 threat on a character you’re often better off with Reality Corvus, M.O.D.O.K., Angela, Thor, Dr. Strange, literally any 3 cost + 2 cost combination… the list goes on and on. In Black Order in particular his problems are exacerbated by the fact that he does not fit in at all with the core 15 threat team of Thanos + Mind, Corvus + Reality, Proxima, which means unless you’re playing 20 threat he does not fit into your team and even then you’d probably consider Black Dwarf + Soul/Power on Thanos a better choice. Death’s Decree doesn’t help his power issues as he’s got a flat power builder so you’re probably in a pattern of move->attack->throw a terrain and only have power for ~1 Mind over Matter. Unless there’s a lot of Size 4 terrain on the board M.O.D.O.K. will literally do the same job better in the context of Black Order. The Mind Gem is a nice way to give him more power and more control/utility but then you’re paying 6 threat for a character that finally feels worth his 5 threat, when you’re trying to squeeze out as much efficiency from your low model count as possible (and this can’t be done at any threat level with the aforementioned core both points-wise and because Thanos should already have the mind gem).

That’s going to be it for this week’s tier list! Let me know in the comments what pieces you think I overrated or which pieces I’m sleeping on. If you want to make your own Black Order tier list you can make it here (I fully expect one by Morgan Reid to show me the true pro view of Black Order):