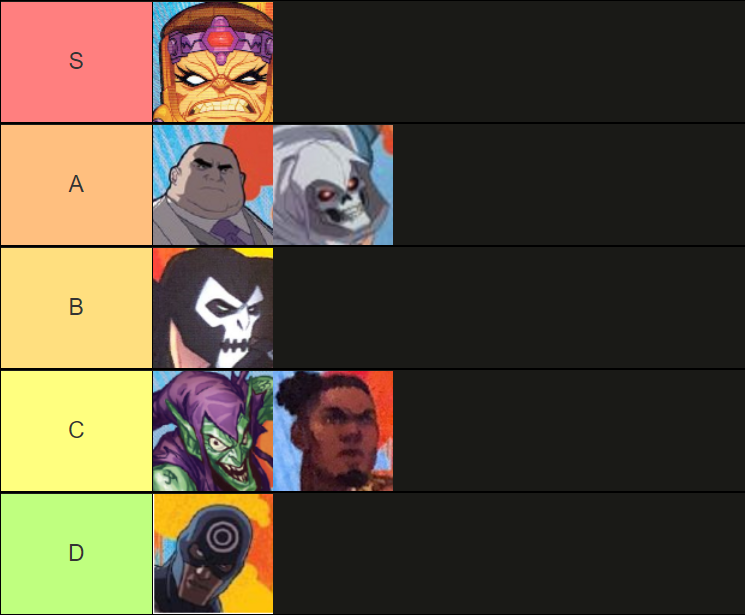 Another Tuesday, another tier list! Continuing on from last week’s Cabal we’re covering another “bad guy” faction in Criminal Syndicate. Personally, Criminal Syndicate has been close to my heart since launch, and I was one of the first to bring them to a TTS event in Season 3 Final Bracket where they were made legal at the last second (I got immediately pummeled by Morgan Reid’s Black Order). And more recently I piloted them to a 4-2 finish in Season 4, just barely missing the Final Bracket cut. They are an incredibly potent secure-focused affiliation who synergizes uniquely well with the fast scoring secures in the game. On top of that, they have M.O.D.O.K., so what’s not to love! But enough about my favorite oversized head, for those of you new to this tier list series here are the ranking criteria:

– All rankings are based on playing these characters in the given affiliation. They might shine elsewhere but we’re focusing on in the context of Criminal Syndicate rosters here
– Leadership abilities are not factored in to a leader’s evaluation unless a faction has multiple leaders
– Gems won’t be ranked on their own merits they’ll be folded into their affiliated user’s ranking (obviously excluding Black Order).

With those caveats out of the way, lets rank them!

M.O.D.O.K. – S – This will come as a surprise to no-one, especially after last week’s exultation of him. M.O.D.O.K. is by a mile the best 5 threat in the game, and on sheer efficiency per threat he is a contender for best character in the game full stop. Metas are defined by him, games are ruined by him, he is the destroyer of worlds. And in addition to being such a terror he also lets you bridge to Cabal effortlessly, something that is definitely worth considering if you’re worried about playing extreme attrition matchups with your CS team. A Gamma or Witnesses 4 wide CS roster is always glad to have him, and he synergizes incredibly well with Cruelty, Shadow Organization and All According to plan. Park him on a secure where he can still be relevant and he’ll daze and bow anyone nearby until you have uncontested control of the map. If he does have a weakness, it’s low threat B and D shape where he can have a hard time holding a secure AND being relevant especially when you’ve only got 4 characters to cover an entire board, but he’s often just worth it anyways.

Kingpin – A – Far more so than in Cabal, Kingpin shines in his Criminal Syndicate. The rankings do state that the leadership is separated from the characters kit for evaluation, but it must be said that his kit synergizes INCREDIBLY well with the standing on secures signature playstyle his leadership brings. He is arguably the most tanky character in the game with 14 stamina, respectable defenses, damage reduction from ANY source and immunity to damage from collisions with characters. If you stick him on a point, he WILL stay there. And if they somehow manage to daze him, he has so much to do with that power. A double Hail to the King with some Street Level Negotiation on top is absolutely game ending. And his basic builder attack has wild triggers to stun AND push! All this combines into a character who double moves onto a center objective round 1 and never leaves, constantly threatening to push and throw characters off the point. And if multiple enemies gang up on him, he’ll make them regret it. If you’re playing CS you’ll be taking him regardless, but he very much is a main selling point for the affiliation next to M.O.D.O.K.

Taskmaster – A – Taskmaster is almost as important off the table as he is on. As a rogue agent, he is a key piece of smoothing over any affiliation splashes you include, but as a Criminal Syndicate member proper he can still use key cards like Shadow Organization and All According to Plan. And on the table, he always manages to impress. In the Avengers tier list, I complained about Captain America being too expensive for what he does. Taskmaster does almost literally everything cap does in similar ways minus the leadership and bodyguard for one less threat. Turns out a VERY tanky 3 threat option is good in general, but in Criminal Syndicate he is a great flank holder, with few enemies that can pick him apart efficiently.

Crossbones – B – As I said in my Cabal rankings, I like Crossbones a LOT more in Criminal Syndicate. His extreme tankiness and aggressive superpower makes him an ideal secure holder in an affiliation that is consummately focused on that. He also continues the tradition of characters that bridge Cabal and Criminal Syndicate (huh, who would’ve thought all the bad guys would be criminals too?) but again as mentioned last time, you probably would rather play Taskmaster or another Cabal 3 Threat option if you’re going that route. Not much to say here other than he probably should be in your 10 if you’re playing Criminal Syndicate.

Green Goblin – C – Green Goblin is in a weird state right now. He has a lot of nice upside when he gets power, but his builder is so bad he pretty much never will. There are some off-meta lists like Thanos Spider-Foes that try to fix his builder, and he often makes it into Brotherhood rosters that can load him up with power, and enjoy specific synergy with his reactive terrain destruction. But in Criminal Syndicate you have neither of those tools to improve him. He is an okay backline objective holder with hit & run and r4 attack, but it rarely wows. I’ve tended to take him recently, but that is specifically to do with the value of an affiliated 4-threat for team building, and I just barely like him better than Killmonger. The base size also helps with some budget HM counter-play, as he can actually reach the enemy’s backline on B and F, terrain willing.

Killmonger – C – Honestly not nearly as impressive as when he’s home in Wakanda, N’jadaka is bordering on a D here. You have no way of funneling him power which means unless your opponent was slapping him around, he won’t be able to do much until round 2, and even then probably not much if his charge attack doesn’t spike. He’s a midline fighter in an affiliation filled with high quality midline fighters, and requires resources that you rarely have for him to pop off. He does bridge you to Wakanda, and can be a solid top end piece if you’re running All You’ve Got/Field Dressing and don’t want to 100% rely on M.O.D.O.K. though. If you are doing something where he specifically synergizes, take him over Green Goblin, otherwise Norm’s your guy for the affiliated 4 slot.

Bullseye – D – Everything I said about Bullseye last time is true here. He’s somehow a reverse jack-of-all-trades, terrible at everything. BUT, in Criminal Syndicate he has his uses. As another Hit & Run character like Green Goblin, he can support backline play as needed on B, E, and D secure shapes, and is actually CS if you’re leveraging Shadow Org / All According to Plan. Personally I’m of the opinion that if you’re playing M.O.D.O.K. there is literally 0 reason to ever play Bullseye, but a lot of people are fans of ditching him to go 5 wide and maximize the scenario play and thats where Bullseye fits. Not an exciting choice but if you just need cheap affiliated bodies he’s there at the bottom of the barrel.

That’s going to be it for this week’s tier list! Let me know in the comments what pieces you think I overrated or which pieces I’m sleeping on. If you want to make your own Criminal Syndicate tier list you can make it here: