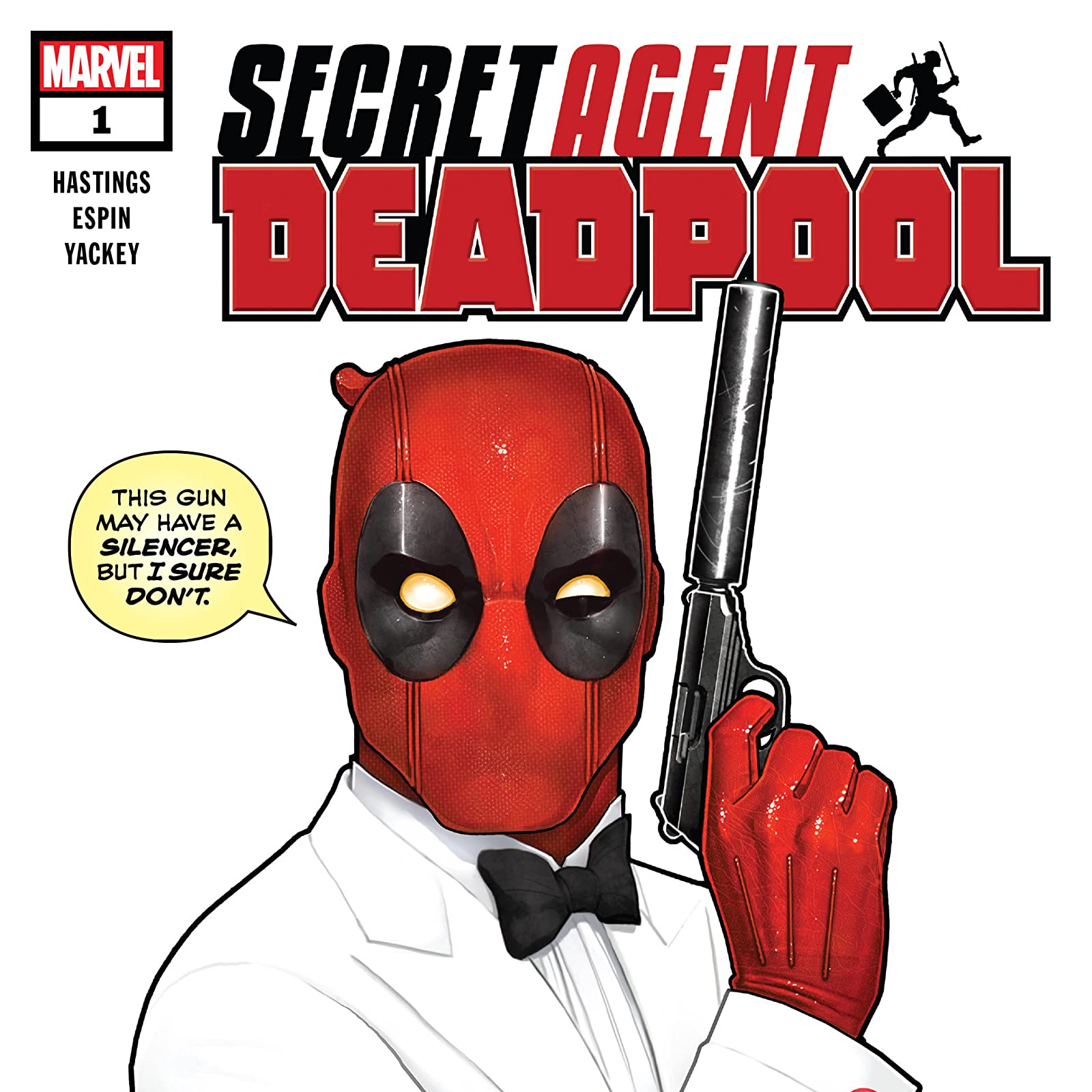 Welcome to acrossthebifrost.com! We have a spicy new release to talk about today, and I’m not talking about the chimichangas – Deadpool has been revealed in his full glory!

Man, is there a lot going on with Deadpool. Three great passive superpowers, a uniquely fascinating active superpower, and a suite of attacks that cover both short and long range. But before we delve into his rules lets talk about his stats.

10 stamina across both sides is the standard “average” 3 cost stamina allotment but Deadpool takes it in an interesting direction. Much like Thor and Black Dwarf, his injured side has more stamina than his healthy side. Due to the much lower stamina pool, this leaves him with 4 stamina on his healthy side, which is essentially the standard healthy stamina of a 2 threat. So expect him to go down FAST, then live a while on his injured side.

Rounding out the rest of the top of the card we have very few surprises – medium move, size 2, and a bit of a nice bonus with the 3/3/4 statline. This is all accentuated by his passive superpowers to make him tankier and longer lasting than you’d expect, but we’ll get into that later.

Next, we come to his attacks. 5 dice physical with power/damage is the “standard” for 3-4 threat characters, but he doesn’t have a wild trigger or bleed on damage like some other peers have. It’s plain-ness is a bit deceptive though as he has a reroll effect that will make his attack not dissimilar to a 6 dice attack except on the very high and very low end (only isn’t giving you essentially an extra dice when there’s nothing to re-roll!).

Bang was already partially spoiled earlier but with the full picture it becomes a LOT more attractive. 4 dice range 4 is rarely anything to write home about as it struggles to consistently do damage. But here, we aren’t relying on Bang for power like Bullseye does with his builder. Here we’re fishing for the jackpot. You already have a single reroll, if you can compound on that with bonus dice or extra rerolls, the odds of a second attack become far more likely. And with a bit of luck (and a LOT of dice fixing) you can live the dream and make SIX attacks at range in an activation, twelve if you go All You’ve Got on it. Time to start stacking hammers and lockjaw on him, with Shuri mixed in for good measure.

Finally we come to Deadpools spenders. He has a different one on each side which might be glossed over on a quick glance. When healthy, he has Duodenum Poke which as someone more familiar with Naruto than Deadpool’s comic runs evokes this image in my mind:

But in reality, Duodenum Poke is a solid if toned down version of She-Hulk’s “The Defense Rests”. It’s unclear to me how often you’ll get this attack off due to his low stamina healthy side but if you spike a strike early on, feel free to unload.

On his injured side, Maximum Effort ups the ante with an extra power to use and an extra die of damage. It also replaces the slow/bleed on damage trigger with a doozy – with a single wild you may advance (yourself, not the target!) short, then do a damage to each person in r2 and gain a power for each damage dealt this way. Mobility, power generation, and guaranteed damage? Yes please!

That leaves us with his superpowers, and we’ll focus on the ones on both sides first. To start, we have Merc with a Mouth – 3 power to reduce an opponents power by two. Flavorfully obnoxious and a rare effect in the game – in fact the only similar effect I can think of is the Team Tactic card Sucker! from the core box which has been consistently maligned due to its bevy of restrictions and high cost. This, unlike Sucker!, will be used consistently and repeatedly if Deadpool manages to get power. In fact, it helps mitigate the dangers of spiking without finishing the job as you can convert power generated from attacks into taking away the power your opponent got for taking damage.

Next we have I Know Karate, which we’ve alluded to earlier in this article when talking about rerolls. Whether you liken it to Okoye’s General of the Dora Milaje or the Inhumans’ racial passive, its still great. An average of ~.5 more successes on each attack and defense roll tends to add up, especially if you’re throwing out multiple attacks in a turn. It takes his defenses from slightly above average to great and really makes the average dice pools of his attacks shine.

For the main course we have the WONDERFULLY titled “Unicorns, Rainbows, and Sugar Plums Dancing Through My Head” whose rules text is somehow even better than the name – immunity to pushes or advances from mystic attacks or superpowers? That’s literally a personal, always on PSD!

As some of you may or may not know I’ve been a HUGE fan of PSD this season due to the prevalence of Web Warriors, Enchantress, M.O.D.O.K. and Mind Gem users aka Loki and Thanos. In fact, I was literally the only person running the tactic in the first half of the league! I do not know where the meta will go in the future, but as long as those options are meta (and I forsee them staying that way) Deadpool will have incredibly strong matchups against them. He can solo a flank vs any of those pieces and not only survive standing on the point, but also possibly out-trade in certain cases (NOT M.O.D.O.K.).

Finally, we have Healing Factor [2]. Not going to spend a ton of time on this one as its pretty straightforward, but I’m a bit less wowed with it on him than Wolverine or Sabretooth. His 4 stamina front means hes unlikely to survive chip damage to heal on his front side, but its a welcome addition to his 6 stamina backside. He’s also not a good No Matter the Cost target so there isn’t a great proactive play for him to trade away stamina he knows he’ll get back immediately. The main upside to me is it makes him eligible to use X-Ceptional Healing, which is an incredibly potent tactics card when needed.

Once we get to his injured side, we get the crème de la crème – All Right, Now It’s Serious. He counts as healthy for any and all purposes on his injured side. This is HUGE considering how easily he will randomly go pop in early rounds to a spiked attack thanks to his 4 stamina. He can still be fully relevant while injured, which is a huge boon. Between this and his personal PSD, I fully expect him to be a potent counter to control in Criminal Syndicate rosters. Do note that the way its worded you are never considered injured for the purposes of Tactics cards or other special rules (no extra big Death’s Decree from Thanos, unfortunately).

(Edit: this ability has already been FAQed because of awkward interactions with All You’ve Got, etc:

BIG shout-out to AMG for clearing these things up immediately before release. From personal experience with certain other miniature gaming companies that won’t be named, all too often stuff like this can be swept under the rug. )

To wrap things up, let’s talk the cards that come with Deadpool:

Yoink is a MASSIVE wall of text but it all boils down to this: be within 2 of an ally Deadpool has comic ties to (or an enemy if its Hydra Bob) and do something cool. You’ll probably want to focus on the proactive options like Cable’s placement option but it has a lot of flexibility built in.

Pretty Sneaky, Sis is Shadow Organization but for X-Force. This is hard to evaluate without knowing much about the full roster for X-Force right now, but I have a lot of experience playing Shadow Organization in CS so I’ll speak to that. Shadow Organization is a brutally effective card that not enough CS players take right now IMO. It can absolutely cripple the Wakanda and Web Warriors matchups if applied on an E shape, can turn off M.O.D.O.K. for a round with some good positioning, and can even create imbalances in D and B shapes in your favor to build an attritional advantage. The effect is solid, and I can’t wait to see it in the context of another affiliation.

Finally we get some Chimichangas! In a massive flavor win, Chimichangas creates an objective token that heals you and generates power. It interacts with all the cool extract interactions – Enchantress can charm it off you, Miles can blast it out of your hands, you can even put the mission first and use Mission Objective to hand the tactical Chimichanga to an ally!

All in all I think Deadpool is an exciting new piece with a lot of ways to take him – Criminal Syndicate, X-men in particular have clear synergies with him, and he’s just generically good to take as a flank holder. Regardless of Hydra Bob I think the Deadpool box will be worth it just for the merc with a mouth and his tactics.

And if you’re looking to pick up this dynamic addition to the game may I recommend our sponsors:

As a lifelong NA resident I can’t personally speak to Blackgate’s service (though I’ve heard good things from UK based wargaming friends), I CAN speak from personal experience DiscountGamesInc. If you want gaming product at the best prices shipped to your door, it’s the go-to option for me. And the owner of DiscountGamesInc, Jay, is personally a huge tabletop gamer and even has a MCP focused podcast you can check out here:

so you know that money spent there is directly supporting someone involved in the community.

That will wrap us up for the inaugural First Impressions article here on acrossthebifrost.com – let us know in the comments if you like this article format or if there’s something you’d like to see to improve on it!