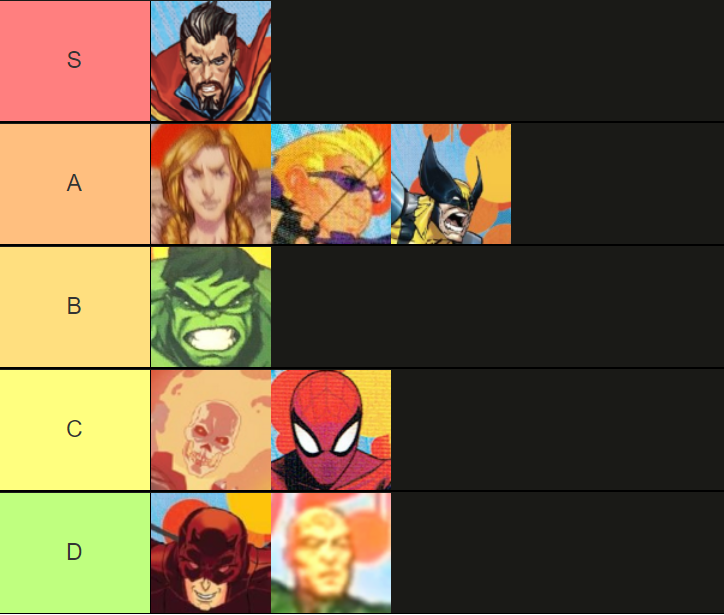 Another Tuesday, another tier list! Continuing down our alphabetical order, we have the Defenders!

The Defenders of the comics that MCP’s Defenders more closely relate to (though they have Daredevil Luke Cage and Iron Fist all listed on the affiliation card so they’re taking nods from the Netflix show) – a team originally consisting of Doctor Strange, Namor, and the Hulk brought together to deal with mystic/supernatural threats. In the game, Defenders are the mystic threat. Between their abnormally high amount of mystic attacks and Strange’s leadership to change your attacks into whatever type you want, the have by far the best attack type spread in the game. But without drilling into more of their inner workings of Defenders let’s break down the rules. For those of you new to this tier list series here are the ranking criteria:

– All rankings are based on playing these characters in the given affiliation. They might shine elsewhere but we’re focusing on in the context of Defenders rosters here
– Leadership abilities are not factored in to a leader’s evaluation unless a faction has multiple leaders
– Gems won’t be ranked on their own merits they’ll be folded into their affiliated user’s ranking (obviously excluding Black Order).

Doctor Strange – S – Strange is in a lot of ways the star of the Defenders. He’s critical to the bevy of portal plays – Pentagram of Farallah can only be played round 1 by him (with the help of the soul gem).

And Pentagram is quite possibly the most powerful round 1 Team Tactics card in the game barring Hired Muscle. It opens up all kinds of insane extract steals with priority, and can even let you land attacks into your opponent’s deployment before they even get to go. We’ll talk more about some of the interactions in each specific character’s entry but if you want to know more about all the nasty tricks you can do I highly reccommend checking Xavier Protocols’ article entitled Pentathaletes, which creates a comprehensive game plan to abuse Pentagram no matter the crisis combination:

Going beyond that his attacks have solid range and great effects (omnidirectional push? stagger OR place an activated token?), his defensive stats are improved on massively by his superpowers, and he has incredible consistency with his reroll passive. Defenders games will live or die on how you use him. He is a reasonable splash in other affiliations as a top-end long range supportive piece but if you’re a big fan of Strange, he shines by far the most in Defenders.

Valkyrie – A – Brunhilde just kills it everywhere she goes. Great round 1 plays with or without Pentagram, 2 innate power generation being a natural synergy – portal, grab an extract, retreat is always in your grasp. Her purely physical output is “fixed” by Strange’s leadership, which she often has power to pay for thanks to her Asgardian heritage, and she’s one of the only characters in the affiliation with a character throw (the others being Hulk and Wolverine, but Hulk is Hulk and Wolverine’s character throw is on his ultimate). She of course also bridges you to Asgard and A-Force in a pinch, but most Defenders rosters I’ve seen prefer to play single affiliation to have more room for characters that make Pentagram an unpredictable bag of cats to deal with.

Hawkeye – A – The man who never misses, Clint Barton is consistently a win in my book. The consumate B/D secure poke character, he supremely manages to win any stalemate/poke war. Already flexible in his type coverage, he rarely uses their attack modifying leadership for more than the hex application, and he can really weigh down enemies with debilitating statuses. And if someone gets into a long range battle with him, he’ll punch above his weight by counterattacking BEFORE being attacked in the first place!

Wolverine – A – I’ve got two words for you bub: Portal Barrage. Until you’ve been on the receiving end of first activation Wolverine going through the Pentagram portal, No Matter the Cost-ing a Berzerker barrage onto his choice target, dazing them and causing a collision into another character before slashing them with his adamantium claws leaving them low and bleeding while he’s at near full hp, you’ve never known the fear of death into your heart. Against more attrition-focused teams you can hold the plan until the end of the round, making them leery of getting anywhere near the portal close to him. He’s also pretty tanky against teams that aren’t packing a M.O.D.O.K. (or other big mystic attack options), and if he gets dazed full of power he’s a pretty solid M.O.D.O.K. hunter himself.

Hulk – B – This one is a bit of a tricky one, I could see Dr. Banner going lower here. Hulk has been maligned since the launch of the game for being an ineffectual centerpiece beater. Personally I applaud them from erring on the side of caution, as I remember how obnoxious Colossals/Gargants could be in Warmachine/Hordes as gear checks that if not killed would run the table. That said, She-Hulk does show they could have pushed him a bit further. But we’re not here to talk about what could or should have been, we’re here to judge him as he is. In Defenders in particular, the focus is on two particular traits he has that no one else has – 3 power generation / round and a large base. This allows him to pass through the portal to your opponents side of the board and steal two extracts while retreating, to particularly brutal effect on Struggle for the Cube Continues. He won’t make every team, and when he does he’ll have a very specific job to do but outside of his cousin he’s the only one who can pull it off and She-Hulk isn’t affiliated. If you want to play the Cubes portal game take him, otherwise I’d say his stock lowers significantly.

Ghost Rider – C – Some people LOVE Ghost Rider. I am not one of those people. He is a bundle of weird punitive defensive tools and some neat attacks, but he never throws around his weight quite like Strange or Thor or M.O.D.O.K.. His large base size is promising for portals plays until you realize he doesn’t really have the power to do anything fancy unless you feel like rolling BIG on a portal -> Chains of Damnation spike into Hell on Wheels-ing to an extract/secure. Alongside his character card we have two somewhat divisive Tactics cards in Deal With the Devil and Highway to Hell – bot insanely cool from a flavor perspective, but not insanely strong which you’d be looking for in character-specific cards for a narrow high threat centerpiece. Personally, I’m not sold on him unless you love the model/flavor. He also doesn’t help you splash in an extra affiliation for easier team building options which while not a mark against him means he’s also not bringing more to the table than his cards imply.

Spider-Man (Peter Parker) – C – Here comes your friendly neighborhood too-good-to-be-3-threat-but-feels-pretty-bad-at-4-threat-man! Joking aside, Peter does bring utility in his extreme mobility and control options. Opening with two Impact Webbing attacks into a Web-A-Pult to set back 3 of your opponents characters short back from the starting line, and portalling back is an obnoxious control play. He also has extreme mobility for extract and retreat plays. Sure, you can get similar outcomes for cheaper with mobile extract grabbers like Toad or better pushers like Shuri, but if you’re trying to bridge to Web Warriors (who don’t mind Strange as a control and defensively minded expensive piece for high threat games), you can easily do worse.

Daredevil – D – I’m betting a few people on social media are going to call me blind for not seeing the genius of Daredevil in Defenders but I think this is the right rating for him. His ultimate has some neat interactions with the leadership (modifies the attack action, not the attack so everyone he hits with his a2 has the possibility of being hexed) and his defenses can be kinda obnoxious with Strange’s help, but he doesn’t really have any strong interactions with Pentagram that someone else wouldn’t do better, and if you wanted a dedicated 4 threat fighter in-affiliation, Wolverine’s your man. Don’t get me wrong, I’m going to be hyping up Matt Murdock when he’s wall-crawlin with the Web Warriors whenever we get that far down the alphabet but I think he’s a miss for the Defenders.

Wong – D – I feel like time has not been kind to Wong. On release people were hyped for what felt like unprecedented support tools, bonus power in particular. And while it’s good, I think the rest of his card was not properly evaluated. His ONLY attack is quite possibly the worst attack in the game, his defensive stats are a joke if he’s not within r3 of strange, and a bonus power / 2 health / 1 status removed per round just doesn’t feel like he’s carrying his weight. I would rate him lower, but the inherent value of a 2-threat (and the ability to now take multiple 2 threats for priority manipulation) and the ability to get a bonus power onto anyone r1 and move him onto a back objective is powerful in the right setups. Just pray to Hoggoth or your dice that your opponent never presses in far enough to start lobbing buildings or even attacks into him.

That’s going to be it for this week’s tier list! Let me know in the comments what pieces you think I overrated or which pieces I’m sleeping on. If you want to make your own Defenders tier list you can make it here: