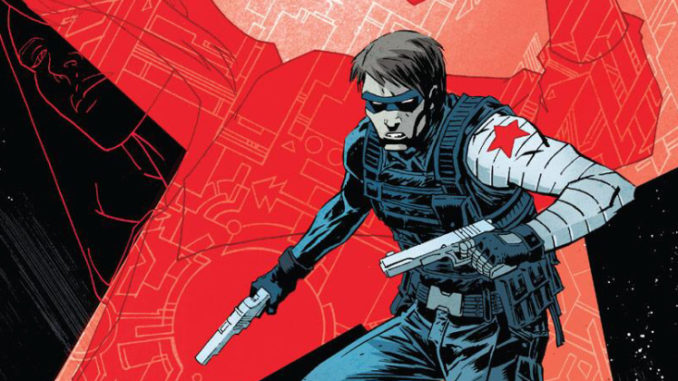 Welcome back to the Rehabilitation Clinic! Here, we rehabilitate unloved and underutilized characters, and try and give them a new lease on life.

This week, we’re covering everyone’s least favorite Rogue Agent, the Winter Soldier – Bucky Barnes. He saw some light play in seasons 2 and 3 of the league, but before he ever caught on on he was supplanted by Taskmaster. In season 4 he’s seen some fringe play in Spider-Foes Thanos but other than that he might as well not exist.

Unlike Taskmaster, the Winter Soldier has no strong suit. Having a range 5 attack is nice, but 4 dice leaves a lot to be desired. And just like I said in the Bullseye episode (check it out here: ) 4 dice builders with power per damage should be against the rules. It seems almost not worth talking about his Red Fury spender attack when his power generation is so bad, but attacks that generate further attacks are solid if you’re able to get him going. He rounds out his kit with an interesting but ultimately not insane place effect, a neat but ineffectual “revenge” mechanic, and a reroll passive that doesn’t work as often as you’d like. Oh, and Rogue Agent of course.

The other unique element we should go over is his unique Tactics card, Till the End of the Line.

A full stop “cannot be moved” and 7 dice on both physical and energy defenses is usually a guaranteed held point for the low, low cost of 2 power each on 7 threat of characters you don’t love taking and a tactics card whose value will vary depending on the matchup.

But even sarcasm aside, that is a powerful effect that could potentially raise the value of both characters involved. Such an opener would be decent to outright powerful into A-Force, Criminal Syndicate, Wakanda and Web Warriors, – all of which are meta defining affiliations at the time of writing. From personal experience, if you Shadow Organization with your Criminal Syndicate team in the power phase of round 2 vs Wakanda, they tend to fall massively behind on scenario or attrition once they can no longer effectively push you around. Till the End of the Line has an arguably much more powerful effect but since its limited to the two characters and only if they are an inch apart, it will only pay its truly massive dividends in the right situation.

One thing to be aware of is the main weakness of this card – throws. Sure, your characters can’t be thrown around, but they don’t have any bonuses to their dodge pool either. The common strategy for dealing with Cap if you don’t have good Mystic attacks has always been to repeatedly throw cars and buildings at him until he can no longer ‘do this all day’. Some matchups won’t be able to hit critical mass of throws on a single flank to drop these guys but be very careful of a full power Magneto going to town.

So, armed with the knowledge that this use case is with Captain America, we look towards Avengers to build our roster. I’d say include all the usual suspects, but Hawkeye quite possibly doesn’t make the cut here as a lot of the time Winter Soldier will be your backline objective holder on D shapes. Alternatively you can go big on B shapes like Infinity Formula and Mutant Madman and attempt to play Bucky + Cap on one side with Hawkeye playing the other. For generating an example to work through let’s say we’re playing Infinity Formula and Hammers at 17 versus Cabal.

Our opponent picked Hammers in this case but we have priority and put them onto a spread out secure they won’t like as much as a nice E like Gamma. A traditional Cabal list will look something like Red Skull, Zemo, Shuri, Okoye, and M.O.D.O.K., with an All You’ve Got package for M.O.D.O.K. to run the table with. We want to fight that as effectively as possible. We’ve committed to Captain America and Winter Soldier here, and the next addition would be Hawkeye so we have good coverage on both flanks. With our remaining 7 threat we would need a solution to M.O.D.O.K. to round things out, and I think there is a natural selection – Thor, Prince of Asgard. Round 1 For Asgard plays are scary for anyone who’s even thinking of grabbing the hammer on the side Thor is on, and if he can hunt down ol’ big head you’ll be golden. Finish things up with the 2 of your choice, presumably Black Widow, Toad or Okoye here based on taste and you have a pretty functional game plan for Winter Soldier!

Obviously hes not the star of the show here but he does a solid enough job. And in matchups with a lot of displacement – Loki w/ Mind Gem, Thanos w/ Mind Gem, M.O.D.O.K., Enchantress, Medusa, Wakanda and Web Warriors are all in vogue right now doing that – this stops them cold for a round, which potentially can be obnoxious.

Off the table, he does bring some flexibility in roster building. Rogue Agents are nice bridge pieces to ease the affiliation splashes that Avengers has access to – A-Force, Asgard, and Wakanda all have characters that overlap, and Bucky can smooth that over in a pinch. Probably not the best 3 cost in-slot for any of those affiliations, but he’ll do in a pinch if you’re tight on character slots.

That’s going to wrap us up for this episode of Rehabilitation Clinic! Let me know in the comments wherever you see this posted who you want to see next!

Across the Bifrost Ep114 Dormammu