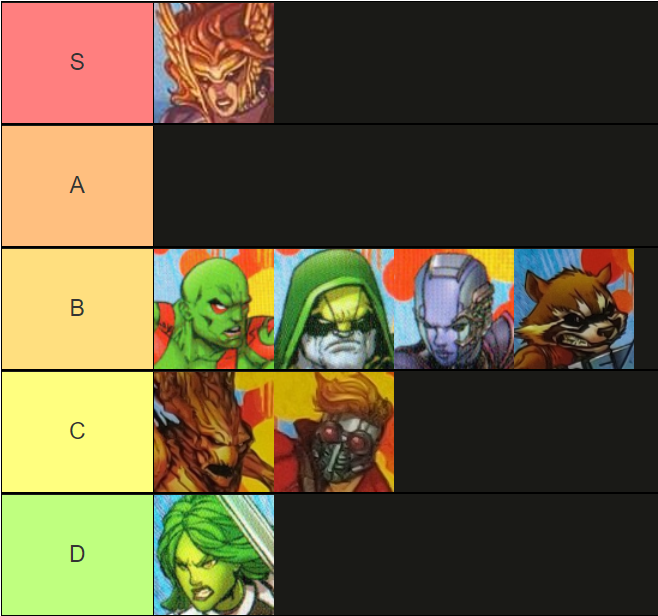 Though, this tier list definitely won’t be featuring Ant-Man, sadly. An ever-shifting squad of space misfits, the Guardians in Marvel Crisis Protocol have been the “go wide” affiliation since their inception. Until A-Force, they were the only affiliation to include two 2 threat characters, and alongside their 3 threat leader they have the lowest threat three character core in the game at 7 threat. But before we get deep into talking Guardians lets break down the rules. For those of you new to this tier list series here are the ranking criteria:

– All rankings are based on playing these characters in the given affiliation. They might shine elsewhere but we’re focusing on in the context of Guardians rosters here
– Leadership abilities are not factored in to a leader’s evaluation unless a faction has multiple leaders
– Gems won’t be ranked on their own merits they’ll be folded into their affiliated user’s ranking (obviously excluding Black Order).

Angela – S – Angela is truly an all star wherever she goes. Single move access to the middle line is a uniquely powerful effect and it’s no exception here. Additionally, Guardians rosters have traditionally struggled controlling how wide they have to go and a second 5 threat to go alongside Power Gem + Ronan goes a long way towards giving the affiliation attractive 4-wide options in a pinch. She also is a lynchpin for Asgardians of the Galaxy which love to play Asgard at high threat and Guardians on certain lower threats. Having a size 4 throw in Guardians is also nice, especially considering how rare terrain destruction is in the affiliation. All in all she’ll shine on any Guardians roster both on and off the board and is a must-include in my book.

Drax – B – A lot of people sleep on Drax because he’s so outshone by Valkyrie as a self-sufficient 3 threat throw/charge-bot, but there’s a lot of hidden upside to the Titan Killer. Capping his character/terrain throw at Size 3 rather than Size 2 opens up a surprising amount of plays that Valkyrie can’t do, his attacks when buffed by Vengeance tokens punch harder, he’s slightly tankier, and his spender attacks both allow for extra displacement if the murder train falls short. Put this guy on a flank in a split C / D scenario where the amount of pain that can be focused on him is limited and force your opponent to let him run free or hit him first to make him hit harder.

Ronan – B – This is a bit of a tricky one. Ronan was, up until Angela, the only upscale beater in-affiliation. Personally I’m pretty big in the camp of “Power Gem of Bust” on Ronan, as being able to threaten Judgment on the first punch your opponent throws is so juicy. Also, you haven’t lived until you Kree Justice an enemy with Judgment on them, leaving them to flip with no power. That said, he’s a bit vulnerable to control which is wildly popular at the moment so your mileage might vary. At worst you can use him as a strange more expensive Ghost-Spider who replaces the ability to yoink people out of danger with applying judgment, though Universal Weapon is a fair bit better than Impact Webbing (and, unfortunately no Web Line). What bumps him from a C to a B in my book is the Inhumans connection. Guardians with their low threat core have been historically open to splashes, sometimes even managing the legendary 7 or 8 wide rosters (kids, don’t try it at home). All in all a borderline B but a worthy one if you’re filling out your Guardians roster, just make sure to include the power gem!

Nebula – B – I’m going to come in a bit high on Nebula here but I think she’s awesome in this age of extract plays. Long move means she can hunt the extract holder, and full rerolls on attacks guarantees she can make them hurt. She’s also deceptively tanky with her defensive rerolls and “totally not Healing Factor 1”. Obviously the downside is her passive makes her entirely irrelevant on scenario but she really does bring the pain at the low, low price of 2 threat. Unfortunately outside of Guardians losing the affiliated upside means she’s consistently outshone by Okoye and Toad for splashes but she’s just behind them in my book, so I’m always glad to give her a go when I’m playing Guardians.

Rocket – B – I had a hard time placing Rocket. I gave him a B because there’s a lot of situations where he’s the key damage output piece (and boy can he pop off) but I think Toad and Okoye show what a true top tier 2 threat should be like and maybe he should be a C for it. Though on the other side, the flexibility of two 2 threat characters in-affiliation is a not inconsiderable boon. His incredible fragility and bizarre inability to stand near Groot (Why let Groot take attacks for Rocket but not make them immune to collision with each other?) might not be enough to outweigh his above average for his threat ranged output, but I love Deadly Duo so much I’m going to tip it in Rocket’s favor and leave him at a B.

Groot is simultaneously amazing and awful in my book. He’s 7 threat both sides with solid defenses, which coupled with his self-heal thats incredibly power efficient means you have to one-round him or he’ll be at full health on his next activation. In addition he can use the leftover power from getting his shit kicked in to throw around some Root Status at r3, making him almost like a budget Loki. He also has one of the most powerful spenders in the game, featuring a medium throw AND a stagger.

On the downside though, he’s kinda slow and can often struggle to get into the action, meaning he often can’t spend actions attacking which often feels like a waste. He also has awkward synergy with Rocket where while he DOES get to bodyguard the little guy for free, I have found that one of the most common ways for Rocket to go down is to have Groot thrown into him. If you need a durable objective holder who can turn on Deadly Duo once per game, take him. But if you’re fantasizing about using I AM GROOT! multiple times per game, you should rethink your strategy.

Star-Lord – C – Star-Lord is all around ok. If I included leadership in ranking he’d probably slip to D because the cost of a Tactics card is high and few characters can use all three rerolls offensively. But ignoring that, he is an all around solid ranged piece that is surprisingly consistent with his plucky attitude (stack some rerolls so its easier to force / improve after the fact). I will say that his stock has dropped somewhat dramatically since Drop Off was banned, though.

Gamora – D – In my A-Force tier list (which you can check out here ) I lay out all the problems with Gamora and they’re arguably worse here. Gamora is a highly mobile glass cannon who needs a lot of power to pop off hard enough to offset her fragility. Guardians gives out WAY less power than A-Force does for her, and while some Winging It tokens are nice if you ever land her it’ll require a lot of effort to keep her safe until she’s worth it to use. If you’re a fan of the character (either comic or movie or both) it’s not the end of the world to play her but know that she can be very finnicky on the table and you can more bang for your buck from other pieces.

That’s going to be it for this week’s tier list! Let me know in the comments what pieces you think I overrated or which pieces I’m sleeping on. If you want to make your own Guardians tier list you can make it here: