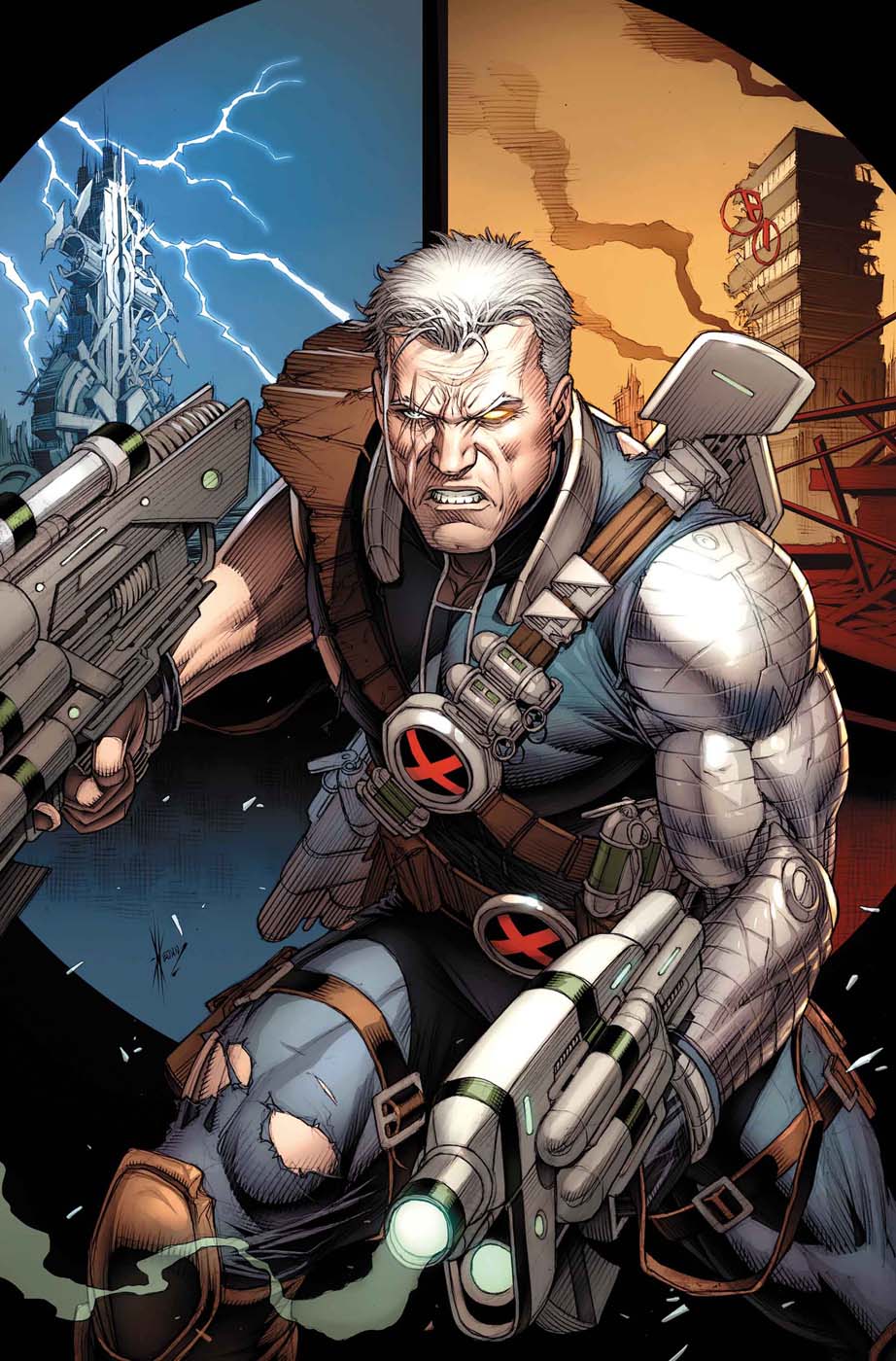 I’ll admit, when I woke up this morning I did not expect such a wonderful present. After weeks of being teased with the sculpt and a panel to play, we finally get our hands on Cable’s card:

And hoo boy, is there a lot to break down here. He’s one of the denser cards in the game and it is all pure awesome.

Confession time before we begin, I’m slightly too young for the true heyday of Cable in Comics/Cartoons so I have a limited understanding of how much of the card is flavor wins, but going by the buzz I’ve seen online I think they’ve nailed it.

Starting at the stats on the top we have 13 stamina split along both sides, slow movement and size 2 for 5 threat. His stamina is SLIGHTLY below average, the standard 5 threat typically has 14 total but thats nowhere near a problem. Defenses are a nice solid 3, 3, 4 respectively, and combined with some of his superpowers goes from solid to impressive.

Let’s circle back to the “elephant in the room” – Short speed with a 50mm base. It is somewhat mitigated by his mobility superpower, but that is one of the shortest movement/base combinations in the game – putting him in the same league as Kingpin, who notably can have awkward round 1 plays.

I distinctly remember the development team saying they banned Drop Off specifically for Cable, and I have to say I’m not quite seeing it. Drop Off is nice to mitigate his problems getting to the middle of the board, and with a Body Slide By One he can reach into the opponents deployment in conjunction with the tactics, but if a couple potshots and some debuffs onto your opponent’s deployment is enough to ban something then Pentagram must not be long for this world.

But enough grousing about sorcerous nonsense, let’s get into his attacks. We start with a banger in Plasma Rifle – 5 dice at range 5 with a wild incinerate trigger as your builder? Yes, please! It’s powerful on its own, obnoxious to face tank a double shot, and applies a massively powerful debuff for your allies to pile onto if Cable himself doesn’t finish the job. Mystic and Sap plus the bonus die elevate M.O.D.O.K. beyond what this attack brings with Energy and Incinerate, but the extra range is sure nice in that matchup (plus the 4 mystic defense goes a long way to winning trades).

For his ultimate we get the difficult to pronounce Askani’Son, and I have a feeling you’re going to be saying it a decent bit. For 6 power you get a 7 dice mystic AOE attack that heals you 1 for each opponent you damage. If you’re not familiar with how AOE/Beam attacks work, allies “hit” won’t take the attack just take an auto-point of damage without gaining power as your opponent wasn’t the source. On the injured side, however, it gets even wilder (heh) with a wild+hit trigger to stagger. Now, I can see some of you guys asking “how is he going to get this off often if he’s plinking with his Plasma Rifle in the back”? And the answer is, Body Slide by One. Turns out, a short move ~= r2, so for 2 power he can slip slide his way into the middle of the action to yeet your opponent’s whole team into oblivion on compact scenarios like E’s like Gamma Wave Sweeps Across Midwest or Split C’s like Mayor Fisk Vows to find Missing Witnesses. It’s never going to be the default move, but always be on the lookout for prime opportunities to blow up a cluster of foes.

Now we get to the meat of the card, his abilities. First off is the X-Force leadership: Wetworks. Each character may reroll 1 attack/turn. Admittedly this is a bit underwhelming as a once/turn ability rather than once/attack but hey it’s free how much can you complain? Something to consider – out of activation attackers like Hawkeye Sabretooth and Venom can get extra mileage out of this leadership when counter-attacking. Otherwise, just treat it as a neat little bit of value that tunes up your characters just a bit – and with Cable handing out Incinerate like it’s candy, that might just be enough.

Body Slide By One we covered already in its spiciest use-case with Askani’Son, but this is just a solid power all around. Due to his high natural power generation, he can basically use this every activation unless stunned and even then he just needs to source an extra power from somewhere and he’s golden. A single r2 place will just about undo a short push (just slightly less so make sure to get closer than max r1 on a point you want to stay on), making the Summers scion relatively tolerant of control. It also allows for some extra threat projection on D/B scenarios reminiscent of Hawkeye’s hook->shoot->walk back pattern. Expect to use this most turns.

I have to admit, I was not expecting to see a downscale version of Magneto’s ultimate throwing ability but it’s quite exciting here. Cable won’t mind paying the premium for throwing Size 3 and 4 terrain so much due to his natural power generation, and being able to meet the throw needs of any board is a nice feather in his cap. Obviously would have been nice to be a character throw too, but that would probably be too much.

Using Technology rather than Sorcery, Cable is able to source his own Hoary Wisdom. Unlike Strange, though, he generates comparable power without the soul gem, making him do a similar supportive job for slightly cheaper. Each ability contributes to Cable being a consumate attrition piece and this superpower is no exception.

Finally we round things out with two simple (yet powerful) passives – bonus power generation and immunity to poison. This means short of being stunned, Cable will easily source enough power to use his superpowers as he sees fit.

All in all I’m pretty happy with Cable. We won’t see the full picture until we see the X-Force affiliation and tactics cards but I think its safe to say that Cable will be a viable splash character much like M.O.D.O.K. Thor or Angela have been historically. He’s a centerpiece model with a big power budget and he spends the entirety of that budget on kicking ass. Cabal is an obvious inclusion where he can excel on Es or Bs, and even slot in as a guest heavy for M.O.D.O.K. on D scenarios that he traditionally struggles on. Any other attrition focused rosters will probably find a home for him – Brotherhood also seems like a likely home.

Finally, if you’re looking to pick up this capable addition to the game may I recommend our fine sponsors: