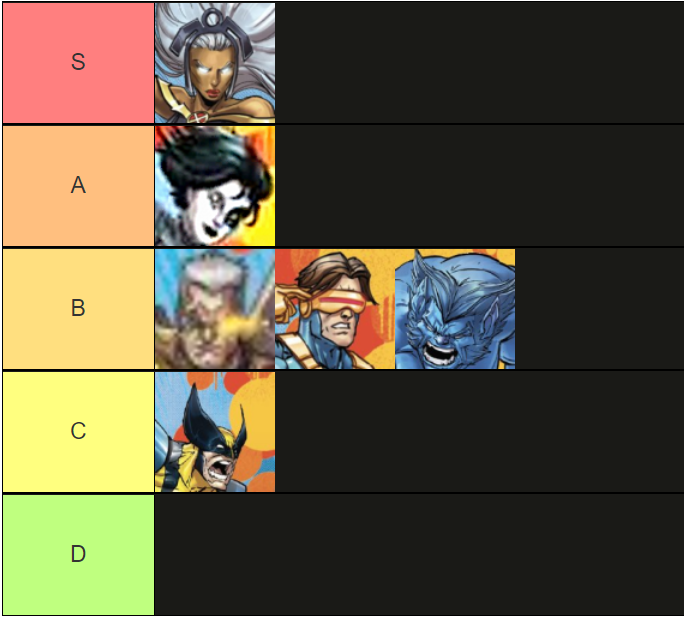 Another Tuesday, another tier list! Continuing on from Wakanda (and skipping over X-Force as we don’t have the affiliation left) we find ourselves judging the Uncanny X-Men. Alongside Brotherhood they made a splash back in November by being the first two affiliations to have multiple leaders. Unlike Brotherhood, though, the X-Men have not been a meta staple. But with Cable and Domino thrown into the mix, I think they’re on the road back to relevance. Multiple self sufficient ranged characters pair very well with both Cyclops and Storm. But enough about how much I love Cable and Domino, you’re here to see the tiers!

– All rankings are based on playing these characters in the given affiliation. They might shine elsewhere but we’re focusing on in the context of X-Men rosters here (although splash options for roster building will be taken into account)
– Leadership abilities are not factored in to a leader’s evaluation unless a faction has multiple leaders (so leadership WILL be factored in here)
– Gems won’t be ranked on their own merits they’ll be folded into their affiliated user’s ranking (obviously excluding Black Order).

As an additional explanation here is the rough ranking of the tiers as I see them:

A – All-star. You’re going to be playing these characters a LOT as part of your core team, and might be important to playing other affiliations in your roster.

B – Generally Solid. They synergize well with the affiliation and you’re happy to play them.

C – Okay. They’re not bad per se, but they don’t have the strongest synergies with what the affiliation is trying to do.

D and below – Somethings wrong here. The character probably isn’t worth its points, has zero synergy with the affiliation, or sometimes both.

And with those details out of the way, lets get to the rankings!

Storm – S – I have a confession to make – I am in love with Storm. I’ve been in love with her the moment her card was spoiled. I mean, look at that leadership! Attritional advantage alongside mobility that gives you better action economy AND big scenario plays round 1? Yes please! (Hint: if I’m not making it clear you should pretty much always be using Storm’s leadership over Cyclops’).

The rest of her kit is less impressive, suffering from real bad power economy issues, but who cares when she has the best leadership in the game stapled onto a body with strictly better stealth? She’ll sit on whatever back point you put her on throwing out shocks like a discount Thor and maybe occasionally throwing an enemy off of a point if she has the power to spare. Also, much like Cyclops (who we will get into later in this article) she benefits greatly from Cubes/Infinity which allow for conservative play while simultaneously fixing her power problem. With super-stealth + cover on constantly she’s also a great cube holder.

As for her Wakanda inclusion I used to be a fan but no more. In initial testing I was somewhat whelmed by her ability to throw out statuses and eke an extra bit out of Wakanda Forever, but I’m increasingly of the opinion that BP Shuri Okoye is always going to be the core. Which by extension means she’s competing with stuff like Valkyrie, Gwen, and whatever fashionable 3 threat characters are making a splash in the meta. That said, if 6 wide Wakanda ever rears its ugly head, she makes a nice 4th wakandan – how does BP Shuri Okoye Storm Medusa Enchantress sound at 20?

Domino – A – Lil miss blender has massively raised my stock in X-Men. Not only does she make it so you can build a 9 point core for X-Men without Taskmaster/Winter Soldier, but she excels at the r3 firefights that are all the rage nowadays. Good luck getting your damage trigger off on Domino when you can’t explode crits and I have cover, Medusa! She’s also an absolute murderbot on offense even without much support from allies. Don’t get me wrong, she loves placing with Storm’s Leadership to doubletap, or Cyclops can move her back after she unloads, but her dice are surprisingly solid without much investment from other characters. She chews through 3 threats in a single activation reliably, and with a bit of luck (which she doesn’t need) I’ve seen her one round Angela quite possibly a half dozen times at this point in the dojo. Incinerate on a stick is also welcome, as it allows some of the more pillow-fisted X-Men to get some hits in and generate power for themselves.

Domino does, of course, bridge you to X-Force alongside Cable. We’re still in spoiler season for X-Force so we don’t quite have the whole picture, but I see a lot of potential for X-Men/X-Force teams that can switch from attrition/control to full attrition when desired.

Cable – B – I’ve seen a lot of consternation with Cable in the dojo but I’m still high on him. He’s an excellent fighter on B/D secures, not so much on E. And while he’s not an overtly powerful beater like M.O.D.O.K. or Thor, his excellent action economy allows him to squeeze out a more consistent output round over round. Obviously he’s a more high end piece – you won’t see him on every team, but the more up the threat ladder you go the more confident I am that he fits great here. Being able to threaten Incinerate on multiple flanks between him and Domino is surprisingly potent. Boosting defense dice alongside cover from Storm can just absolutely screw over enemy plans that require generating power off of builders. And his action economy is amazing – between Body Slide and teleporting off of Storm’s leadership, he should be pretty much always double attacking for the entirety of the game if you need him to.

He does also bring us the X-Force option as mentioned above with Domino. And again, I’m unsure of how X-Force will land in the end. But with Cat and Mouse as a terrific opening tool, I would be very surprised to see them entirely irrelevant to the meta. And at least from the partial view we have so far I think they will pair very smoothly with Storm’s playstyle.

Central to Cyclops’ issues is power generation. Sure he’s tanky, and has a bunch of fun superpowers, but if he flubs his first couple builders he’s in big trouble. Thankfully I’ve been playing a lot of Cubes and/or Infinity Formula recently, which REALLY helps him shine. An extra power or two going into round 2 makes a world of difference. Having a Hit & Run up round 2 for flexibility, or moving a teammate after hitting an enemy for a couple points with your builder isn’t out of the cards. And let me tell you, you haven’t lived until you’ve seen someone tilt when you Quick Draw with cover from storms leadership and daze the attacker in the middle of their turn. On infinity in particular its not uncommon for a round 2 play to be Scott using Storm’s leadership to place forwards, Optic Blast someone into position for a devastating Optic Devastation, giving you a massive advantage on his flank.

Beast – B – Beast WOULD be a C (god I hate random mandatory place effects) but with the advent of Cable & Domino he’s a key part of maintaining a 9 point core team of Storm/Domino/Beast to have massive flexibility with. He’s also surprisingly tanky, and a decent power battery for tactics you don’t care who plays, like Medpack and Bitter Rivals. He’s also a throw-bot in a pinch which plays very well with the conservative control/attrition style I’ve come to know from X-Men. A very common turn for Beast is to move up, throw a character away, move back. Or, if he doesn’t need to stand on a point you can fish for the wild on your builder to teleport onto them, then throw them away. If you do need to stay on a point, though, only ever use your first action to attack with your builder, otherwise you’ll be in BIG trouble.

Along with Wolverine he’s also an Avenger, and unlike Wolverine he’s an Inhuman to boot. Neither of which are super exciting places for him, but if you need some glue for a particular team for some particular coverage he can be your guy in a pinch.

Wolverine – C – I’m guessing I’m going to get clowned on the most for Wolverine’s placement in this tier list but I don’t care. When I play X-Men, I REALLY hate playing Wolverine. He takes up a lot of tactics slots in an affiliation that probably wants to take First Class and To Me My X-Men for round 1 extract plays, and generally hogs a ton of resources for… reasonable 4 threat output. Wolverine is one of those characters that if you’re willing to brute force and dump all your resources into you can make him shine. But X-Men is at its best (in my eyes) when playing a conservative value based game where betting the house on Logan yeeting the world into oblivion is going to cost you games you’d otherwise win. And if you try to go light on the tactics and support allocation for him, he can often feel like a lump. Without support or attacking or being attacked he can’t charge or Berzerker Barrage until round 3. And without those options he’s essentially a medium mover stuck at range 2 attacks. He will get buffeted by control for the first couple rounds and generally feel SUPER bad until you get him into melee. When he gets dug in, though, he’ll do a decent amount of work. So, if you’re reliably delivering him no problem then feel fine including him.

As for other affiliation help, Wolverine DOES allow you to mix with Defenders or Avengers, both are places where he fares better than in X-Men at the moment. That said, Defenders tends to be very greedy on roster slots so not necessarily the best place to go dual affiliation.

That’s going to be it for this week’s tier list! Let me know in the comments what pieces you think I overrated or which pieces I’m sleeping on. If you want to make your own Wakanda tier list you can make it here: