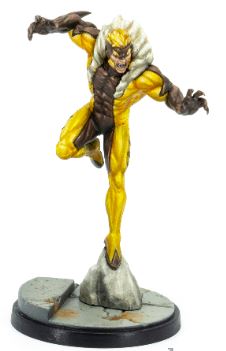 It’s time to move onto the penultimate Brotherhood of Mutants character now, namely Sabretooth. Some people call him crap-Wolverine, but is that true? And how have AMG translated him into the game? Let’s see.

SIZE – 3, which surprised me a little. But then again, I was expecting AMG to have a sly dig at Wolverine by making him size 1 so what do I know?

DEFENCES – Entirely average with 3’s right across the board.

ATTACKS – Sabretooth has 2 attacks, both of which are physical. His first is called Claw Slash and has a range of 2, strength of 5 and power cost of 0. As usual with most basic attacks after the attack is resolved the attacking character gains power equal to the damage dealt by the attack. Roll a wild and you can trigger both Bleed which gives the target character the Bleed special condition after the attack resolves, and Pierce which allows you to change of the defending characters critical, wild or block results to a blank. This is pretty nasty for a basic attack – Pierce does a lot of work, and I am guilty of overlooking it from time to time.

Sabretooth’s second physical attack is called Savage Predator and also has a range of 2, a strength of 7 and a power cost of 4. Roll a wild and a hit and you can trigger Finisher which states that after this attack is resolved Sabretooth may make a Claw Slash attack, and reroll any number of attack dice during that attack. This is pretty nasty, with a decent strength and fair power cost, the main restriction being the short range of the attack. Chaining into Claw Slash is just evil, especially as you can reroll any attack dice that you like in order to trigger the Bleed and Pierce abilities. Another drawback of this attack is that it leaves Sabretooth within range 2 of at least 1 enemy character, and as he has little in the way of additional defensive abilities (as we will go on to see), that’s not the best place to find oneself. Anyway, on to superpowers!

SUPERPOWERS – Not-Wolverine’s first superpower is active and is called No Mercy, and has a power cost of 3. During the next attack that Sabretooth takes this turn he can add 1 die to the attack roll for each damage to target character has, to a maximum of 3. This is an interesting ability, being able to scale attack rolls according to the damage a character has already, ideal for when needing to finish a character off. 3 Power though, you’re probably better off just paying 1 more power and doing a Savage Predator attack. But then, if you’re on your second action and have a bit of power spare why not, I’m sure there will be use cases where No Mercy would be preferable over a second Savage Predator attack.

Next up is a reactive superpower called Untamed Force which costs 2 power. After an attack against Sabretooth is resolved, if the attacker is within range 2, Sabretooth may make a Claw Slash attack targeting the attacker. This superpower can be used only once per turn. This seems fun – even if you never get to use it, at least you are forcing your opponent to think twice (or maybe even thrice) before sending an attack Sabretooth’s way. Of course, this does require that Sabretooth is still standing after being on the receiving end of an attack.

Sabretooth’s final 2 superpowers are both innate. The first is called Aggressive and states that after an attack targeting Sabretooth is resolved, if he suffered any damage, he may advance short toward the attacker. Out of action movement is always a welcome sight, and combining this with Untamed Force makes for a seriously reactive Sabretooth! The second innate superpower is called Healing Factor [1], which means that at the end of each of his activations Sabretooth can remove 1 damage from himself. Handy as Sabretooth needs all the defensive abilities he can get his claws on!

SUMMARY – Sabretooth is clearly very kill-focused, which will no doubt appeal to some play styles. A lot of his abilities are centred around attacks against him being resolved, so your opponent could just spend the game avoiding him, and then you are not getting the most out of your 4 point character. But then on the flip side Sabretooth can move long, so keeping away from him may be tricky.

AFFILIATIONS – Sabretooth is a listed member of both the Brotherhood of Mutants and the Cabal. Sabretooth has no means of destroying terrain and so doesn’t really play into Magneto’s Brotherhood leadership ability, but he fits in more with Mystique’s leadership ability – having a long move means he can benefit from Mystique’s objective token abilities. Cabal is where I think Sabretooth will shine the most – Cabal affiliated characters gain a power each time they damage an enemy with an attack, and as Sabretooth is all about chaining his attacks, he will be quids in in a Cabal team.

An Avengers team would bring some benefit to Sabretooth, giving him a 1 power discount on his No Mercy and Untamed Force superpowers.

If you are wanting to lean into Sabretooth’s healing ability and keep him stick around for a bit longer (hopefully), you could try running him in an Asgard team. It might look a bit odd having all your Asgardians lined up and then a yellow man with a fur collar slapped on the end, but it could work. But then, who are you going to drop off your Asgardian team to fit him in?!

The Black Order want to kill everything, and Sabretooth certainly plays into that desire nicely, but Corvus and Proxima have probably already got you covered on the kill front. Still, worth a try! On the topic of killing, a Spider-Foes team could be good, allowing you to reroll an opponents defence die.

If you want to play a bit more defensively you could run Sabretooth in a Web Warriors team for defence dice rerolls.

Defenders is just good for everyone, but firing off a few mystic or energy attacks with Sabretooth could be interesting.

TEAM TACTICS CARDS – If running Sabretooth in a Magneto Brotherhood team then you could consider Magnetic Refraction which costs Magneto 2 power to play. Magneto gains cover this round, and allied characters gain cover whilst within range 3 of Magneto this round. And, if you are using the Brotherhood of Mutants affiliation, you can return this card to your available team tactics cards during the cleanup phase, it can be played again this game. So, our first recyclable team tactics card – nice. Cover is something which I am too prone to overlook in this game, but cover saves lives. Having this card in hand is no bad thing in my eyes.

Onto the more general Brotherhood of Mutants affiliation cards now – Asteroid M is active and requires 2 Brotherhood of mutants characters to spend 2 power each. Once paid for you get to place one of the two characters not holding an objective within range 1 of the other character. A nifty way of shifting Sabretooth’s location a little, or teleporting right across the board if you find that he is away from the action a bit – great for getting him into position. This reminds me of the Black Order’s Mothership card – very powerful indeed.

The next Brotherhood of Mutants card is called The Books of Truth and is reactive. It states that when an allied Brotherhood of Mutants character is attacking or defending, at the end of the modify dice step of the attack, before the calculate success or failure step, it may spend 2 power. This character rerolls all of their attack of defence dice, including failures (skulls). I really like this – you can see the results of both rolls, and then decide to redo yours. One caveat however, you won’t get to explode criticals from the new roll or modify your dice in any way, because that step has passed – what you roll is what you’re stuck with. Still, if you’re about to lose a critical character and you whiff the defence roll it is a good card to have.

As Sabretooth is also Cabal affiliated we should consider some of the Cabal cards. Cosmic Invigoration could give him an additional activation if he is close enough to Red Skull to trigger the card. And Dark Reign will allow you to focus rerolls when attacking a specific enemy character – very handy if there is a big threat that you desperately need to take out.

Before getting on to more general cards for Sabretooth we should discuss X-Ceptional Healing. This allows a character with the Healing Factor superpower to spend 3 power when it would take damage to reduce the amount of damage suffered to 1. A nice variation of Odin’s Blessing, lovely! On the topic of healing, any of the healing cards like Field Dressing and Medpack would be worthy of consideration to help Sabretooth stick around for a bit longer. Weapon X Program is another Sabretooth-specific card which states that he can spend 3 power to throw himself short and not suffer an damage if it collides with another character or terrain feature. Very nifty.

As Sabretooth is so attack focused any of the dice adding cards would be good – One-Two Punch, Unearthly Rage, Heavy Firepower etc are all good options. to consider. I’m also going to mention Battle Lust here because it works really well on Sabretooth – +3 dice to an attack after a move action with a short push away afterwards? Heck yes!

It could be fun to try All You’ve Got on Sabretooth, giving him a double activation before going down. He could do a heck of a lot of work with back to back activations!

You could force your opponent to attack Sabretooth by playing Face Me. This lets you advance an enemy character towards Sabretooth short, then that character can attack. If Sabretooth can survive the attack then he gets to do all his retaliation shenanigans. Awesome!

If you want to get an early game big attack done you could consider playing No Matter the Cost – Sabretooth could take 1 to 3 damage to get an equivalent reduction in power cost for an attack – nothing that he can’t heal back with this Healing Factor superpower.

Before signing off let me make mention of the UK’s Black Gate Games – they brig you MCP at a great discount, so it would be worth considering them if you are in the market for some online MCP purchases.