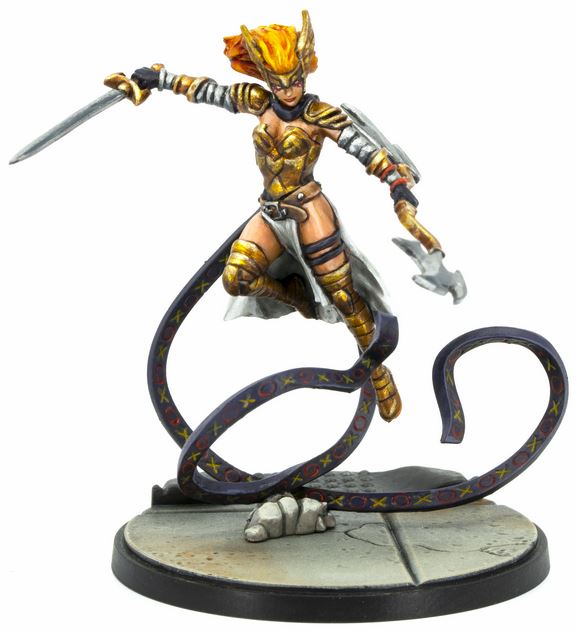 You have no idea how long it took me to track down a reasonably priced copy of Original Sin: Thor & Loki: The Tenth Realm, wherein we learn much about Angela’s origin and get to see some great Asgardian battles. Angela’s introduction into the Marvel universe is an interesting story indeed, but not as interesting as what she can do on an MCP board. Let’s get into it.

STAMINA – Angela is pretty beefy, with 6 stamina on her healthy side. I sure hope she isn’t even more robust on her injured side…

MOVEMENT – Long, which, considering she comes on a medium-sized 50mm base, is pretty fantastic.

THREAT – 5. Dang! Looks like Angela is going to be pulling her weight on the battlefield.

DEFENCES – Angela has a very strong lineup of defences, for 4 dice rolled for each defence type. Heck yes.

ATTACKS – Angela has 3 attacks on her card, the first of which is Physical and is called Xiphos, the Sword of the Stars which, i’m sure we can all agree, is a fantastic name for an attack and will most certainly be getting yelled full blast at the face of my opponent. This attack has a range of 2, strength of 6 and power cost of 0. After this attack is resolved Angela gains power equal to the damage dealt. Already i’m sold – I love 6 strength free attacks, and even though this is only range 2 Angela does move long on a medium base, so it isn’t too bad. But hark, there’s more! After this attack is resolved you have to place Angela within range 2 of the target. This is pretty fantastic – the only way it could be better would be if the move was optional, but still, free movement regardless of whether the attack does damage or not? I’ll take it!

Attack number 2 is an energy attack and is called Blades of Ichor. Again – fantastic name! This is a range 4, strength 5 attack which costs 1 power to use. This attack has the Pursuit ability which is triggered if the attacking roll contains a hit. If it does then before damage is dealt Angela may advance toward the target character short. May move, now that’s more like it! I cannot empahsise enough how pleasing it is to me that this attack is not strength 4 and has great range. And again with the additional movement shenanigans – it’s almost like a pattern is forming… There isn’t much to say about this attack really – it’s really good. Moving on!

Last of all is a physical attack called Heven’s Wrath, which has a range of 3, strength of 4 and power cost of 3. 4 STRENGTH, BOO! BUT – you get to add dice to the attack dice pool equal to the size of the target character. Not so wondrous against Rocket Raccoon, but adding 2 or 3 dice (or maybe even 4 if there is a Hulk or Black Dwarf lurking about) is no bad thing. Plus, roll 2 crits and a wild and you will be able to trigger Cleave which states that after this attack is resolved Angela may make an additional Heven’s Wrath attacking without paying the power cost. The additional attack must target the original target character and does not have the Cleave special rule. Pretty amazing if you can pull off the Cleave, but pretty much equal (albeit it with slightly longer range) to Angela’s free Xiphos, the Sword of the Stars attack when targeting a size 2 character. Personally, i’d be adding as many dice to this attack as humanly possible so as to maximise my chances of hitting Cleave – generally speaking that is.

SUPERPOWERS – Angela’s first superpower is active, costs 2 power and is called Odinsdottir’s Might. This lets Angela choose an interactive terrain feature of size 4 or less and within range 2 and throw it medium once per turn. It is sad that this is only for terrain and not characters as well, but size is hefty – that’s everyone released in the game so far. This combo.s nicely with Xiphos, the Sword of the Stars as well – you can do the attack, place Angela anywhere within range 2 of the target character, and then be in range to fire off this throw – very nice.

Next up is a reactive superpower called Angelic Assassin, which costs 2 power. This superpower states that if Angela dazes or K.O’s an enemy character with an attack during her activation that she may immediately advance short and make a Xiphos, the Sword of the Stars attack. As you might expect, this superpower can be used only once per turn. This seems to me to be a really great superpower – considering Angela is set up for lots of movement and attacking, being able to gain a major benefit for “business as usual” is just wondrous. Imagine firing off a Xiphos, the Sword of the Stars attack, dazing a character, placing within range 2, then firing off Angelic Assassin to advance short and do it all over again. MEGA!

To finish up Angela’s superpowers we have a trilogy of innate superpowers. Firstly Angela is Asgardian so she gains 1 additional power during the power phase (which gives you 2 power – more than enough to pay for anything on her card other than Heven’s Wrath). Lovely stuff. Second, we have the Living Ribbons superpower which states that enemy characters cannot place the movement tool overlapping Angela’s base. Plus enemy characters cannot reroll of change attack dice when targeting Angela with attacks. Blocking enemy movement can prove useful on more bunched up objectives such as gamma shelters, but it’s the dice modification that hurts here – and it’s just on all the time. Bonkers!

Last of all, as if Angela wasn’t mobile enough, she also has the power of Flight, meaning she laughs in the face of terrain.

INJURED SIDE – Angela’s stamina goes up from 6 to 7. As if she wasn’t awesome enough.

SUMMARY – Well, i’m sold! Angela just seems through and through awesome. I love all of her attacks and her crazy mobility – I can see myself using her in loads of games in the future. Plus, that mini is just amazing!

AFFILIATIONS – Angela finds herself listed on a whopping 3 affiliations. Firstly, A-Force which is led by She-Hulk. We haven’t discussed She-Hulk yet on this blog, but she was released the same month as Angela so she is only a few articles away. To summarise her leadership ability, when an allied character is damaged by an enemy effect, another allied character may gain 1 power; and this can only be used on each allied character once per turn. Angela works well with this I think – either as the one taking damage to gain her allies power, or vice-versa.

Second, being the long-lost daughter of Odin means that Angela is Asgardian. Does she benefit much from Thor’s leadership ability? I think so, but the Asgard leadership is pretty much universally beneficial.

Last of all Angela is affiliated to the Guardians of the Galaxy, having knocked about with them for some time in the comics. Rerolls are always fun, and the debate as to whether ditching a team tactics card for 3 reroll instances is worth is still rages on. I say give it a try and see what you think.

As for other affiliations which I think Angela could fit into, the Avengers leadership is nice and gives Angela a 1 cost throw, but I think a 5 threat unaffiliated character is tough to fit in here. She could make for a pretty fun Black Order character due to her mobility and potential kill-power, but as the Black Order cant even fit into a Black Order team it doesn’t feel too viable really.

I think she could be powerful in a Cabal team – just think of all that you can accomplish with all that extra power to spend! She could fit in nicely (though unthematically) with a Criminal Syndicate team. As she is so mobile she can pick up and pass off tokens to her teammates whilst fitting attacks in between. I haven’t tried this, but it’s worth an experiment.

TEAM TACTICS CARDS – Let’s start with all the affiliated team tactics cards that Angela benefits from, and let’s start with A-Force. With A-Force assemble Angela or one of her allies could spend 3 power to add 1 die to its defence rolls for a round for each A-Force character within range 2. Pretty nifty!

Remember when Drop Off was banned? Well, A-Force gets Drop Off 2.0, namely Special Delivery. When an A-Force character with flight (Angela for example) begins a move action within range 2 of an allied She-Hulk during its activation they may spend 1 power each. When the active character ends its move place She-Hulk within range of it, She-Hulk may immediately perform one of her 0 power cost attacks. Sheesh, She-Hulk and Angela – not something you want to see charging at you across the board!

If you are running an A-Force team and you find that Angela is getting moved about a bit too much you could play Stalwart Determination which lets any allied A-Force characters to pay 1 power during the power phase. Characters that spent power cannot be pushed or thrown by enemy effects this round.

Let’s move on to Asgard now. Odin’s Blessing is a beast of a card, and Angela is a perfectly viable target for it. When an allied Asgard character would be damaged by an enemy effect they may spend 3 power to reduce the amount of damage suffered to 1. Straightforward enough – amazing to play and frustrating for your opponent!

Angela also brings with her a new Asgardian card called Rainbow Bridge. Any number of allied Asgard characters may spend 3 power each to play it , and those that do are placed within range 3 of their current location. What a glorious card, and as I think about it I am reminded of a game I played months ago where Valkyrie took advantage of the Rainbow Bridge to swoop in a pick up 2 secure objectives and reap a points harvest. Magical, as all things Asgardian should be.

Looking now to cards outside of Angela’s home affiliations, you could play Advanced R&D for a turn 1 Heven’s Wrath – tasty!

Come on now, you know what is coming – Battle Lust! Move, spend 2 power, add 2 dice to Angela’s next attack, then push the target character away short Heck yes, this feels like it was made for Angela!

Lastly, if you’re fishing for the Cleave on Heven’s Wrath but fluff the roll you could try Recalibration Matrix which will let you reroll your attack dice, and hopefully get you what you want. You won’t get to explode your crits though…

Before signing off i’d just like to mention Black Gate Games who are based in the UK. They have great discounts on MCP and other games, even Star Wars if that’s how you like to live your life. If you’re in the market for new goodness maybe check them out.

That’s it for Angela. Are there any other tactics cards that you think would be great on Angela? What characters and teams do you think she works well with? Comment below!