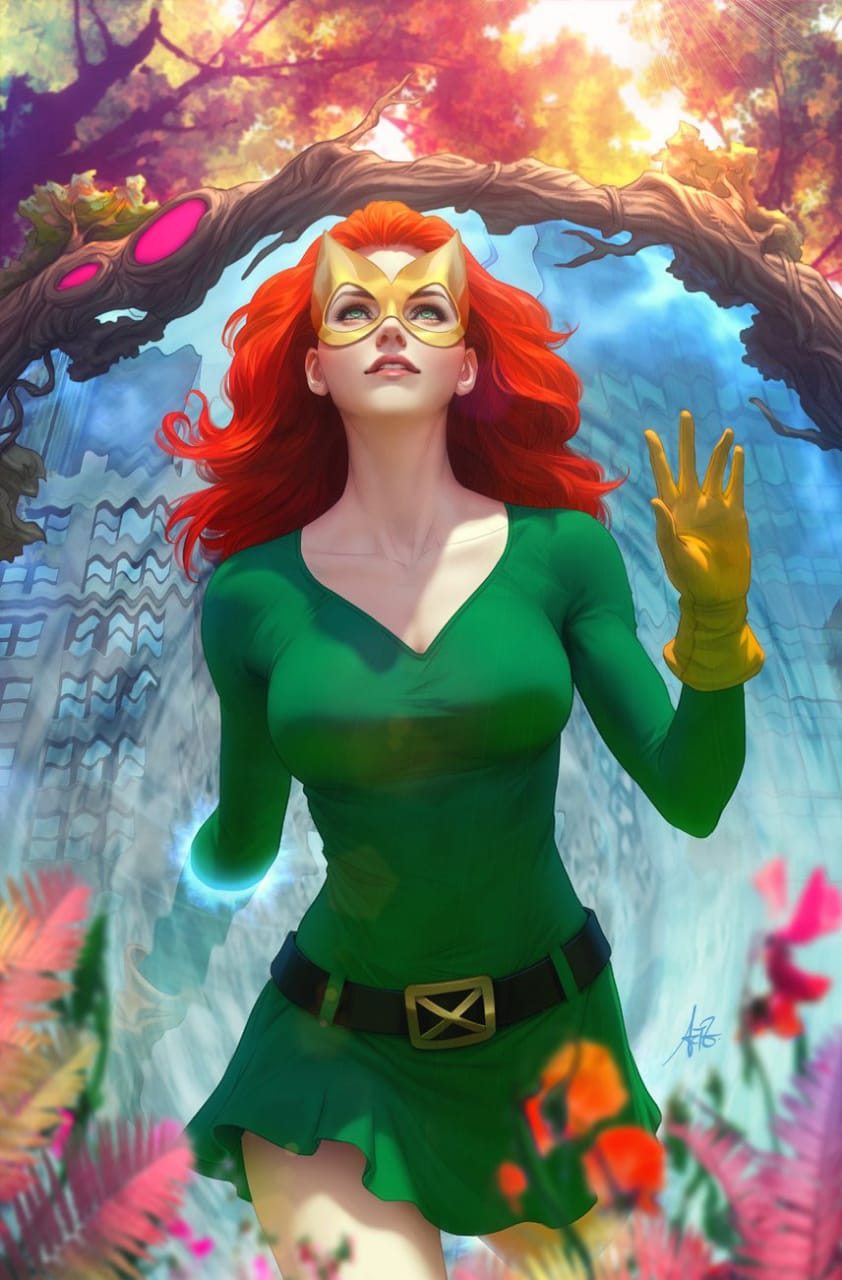 I’m going to go ahead and admit I’m a little cranky this morning. Mostly because I did not expect another spoiler this soon and didn’t feel like doing any writing when I woke up this morning. But I guess I can’t complain about seeing another cool character revealed so without further ado lets take a look at Jean Grey!

Jean Grey is everyone’s favorite psychic (except for Sir Patrick Stewart, of course) who is probably best known for joining with the Phoenix Force and becoming one of the stronger cosmic threats the X-Men have faced. However, this Jean Grey is early on in her X-Men career and hasn’t had a brush with the dark side yet. Will she make X-Men rise in popularity like the phoenix, or will they continue to languish in relative un-love like every X-Men film after Days of Future Past? Lets find out!

I’m pretty reasonably whelmed by these stats. 13 stamina is a bit on the low side compared to say, Thor and M.O.D.O.K. who set the standard at 14 for 5 threat characters, but its not as low as some other characters. And her defensive stat spread is impressive. That said, 6 stamina with 3 physical defense and no defensive tech leaves me somewhat worried about her capacity to go pop out of nowhere. Perhaps her backline role will mitigate this but its something to be concerned about for sure.

With one less power and no built in re-rolls, M.O.D.O.K.’s Psionic Blast this is not, but this is a pretty solid approximation. This will get Jean the power she needs to do cool stuff in her kit reasonably reliably, especially with the Mystic attack type.

Hoo boy this is a spender. Essentially Bob’s rocket shot but without the downside of dazing/KOing grey at the cost of some range, I expect this splashy spender to be used often. First round double move onto a point, then unload onto an enemy with a Psionic blast to get the last 2 power to finish with this bad boy will be a common pattern for Jean-based blowout games. The fact that both effects trigger in the same window gives you a lot of flexibility on how to layer explosive and the throw for maximum damage.

Great terrain throw, wish it could throw characters but as we’ll see with the next segment she still has some character displacement options.

This is an entirely new beast in the realm of displacement tools. Essentially a bow, but with a ton of details slightly off. R2 instead of R3, is a push instead of an advance, can use it multiple times/turn (I know the old bow effects can do so as well, but it seems with Sinister they’ve decided to stop doing that), requires an activated token on the target, and most importantly it can be used on allies.

I’m expecting a lot of cool little yo-yo plays with this, sending up someone like Domino to unleash hell, then yoinking her back with Jean to ensure cover from Storm’s leadership, or some kind of senator extract trick where your opponent gets one activation to hit cable/beast before Jean pulls them back to relative impunity on the first round. This is going to have a LOT of cool corner case uses that will separate the good Jean Grey players from the great.

Solid tech, though probably often too expensive to feel great about unless you absolutely need it. I won’t say no to an emergency PSD on a stick!

The passives aren’t much to discuss but the power economy will be a big boon for Jean considering she has two 3 cost superpowers that she wants to use somewhat regularly, and a bonkers spender she needs 6 for. Without some Latent Psychic Potential boosting her power economy I think she would feel less in the same league as Scarlet Witch and M.O.D.O.K. and more like an Ebony Maw.

All in all I’m pretty intrigued by Jean. Not as much punch as Wanda, but her spender is arguably flashier and she has a lot of cool support / utility tools that set her apart. I’m not sure if she’ll find a good home outside of X-Men but with a toolbox like that I’m sure most affiliations looking for a mystic heavy hitter will have her in the conversation alongside her contemporaries.

Finally a shout-out to our partners who always have the most MENTAL deals on MCP online: