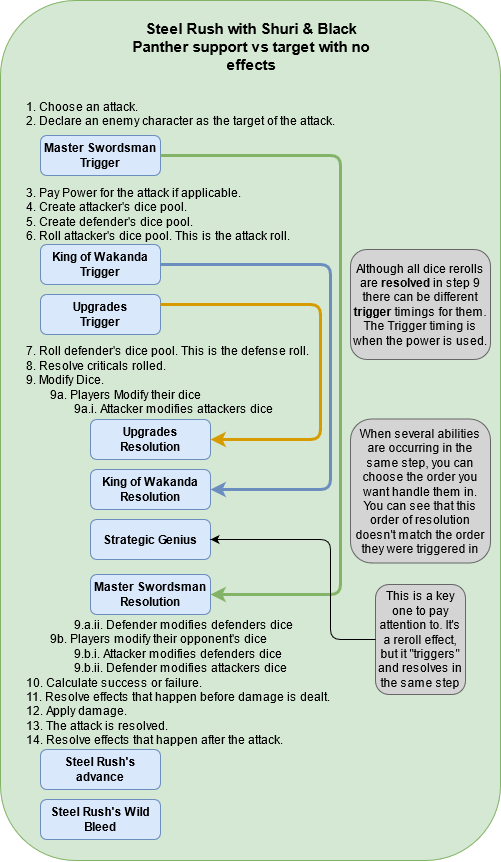 MCP had a bit of a shakeup over the last week in terms of how we play certain characters. Our understanding of the timing at which some of their abilities are supposed to be used has changed (Forum post).

I’ve been doing a bit of blogging on my own blog off and on for awhile now (Appendix Z) and have connected with TT to bring some of my posts over to the wider network at ATB here. I wanted to start my posts here with my coverage of the new understanding.

Some of the initial discussions appeared to be a bit confused about what the change in understanding was. They focused on the fact that you pay for the abilities.

Although it is true (currently) that it only effects (some) abilities you pay for, the payment portion of the rules actually has nothing to do with why these work the way they work.

In my opinion, its a good idea to separate how you discuss them

I suggest this because I think it helps foster a wider understanding of the rules system. If people get it stuck in their head that “pay for” reroll abilities work a certain way, they may be less likely to properly identify how a rule works in the future.

The key wording behind these rules is the “after rolling x dice” part. This is the part that tells you when you can use the power.

The forum ruling establishes that:

So with that out of the way, lets look at some examples!

First up, we have Baron Zemo supported by Black Panther & Shuri, performing an attack against a character with no supporting abilities.

You can see from the chart that we have several different effects that Zemo is taking advantage of. He has four reroll abilities he’s using at have THREE distinctly different trigger timings.

Master swordsman triggers when he’s the target of an attack.

So even though we first use these powers all at different times, we end up resolving them all during the same step.

You can see in this example we again have several different trigger timings, for multiple different rules.

Of note on this one is that the pumpkin bombs has a trigger & resolution for a rule in the attack profile, which occurs before you target a specific character.

You also want to note that the Spider-Foes leadership occurs in a later timing step than the other reroll abilities and it has both its trigger and resolution in that step, so there is no requirement to use it earlier.

There isn’t anything more complicated in this example other than it adding in the last possible dice modification step, where the defender modifies the attackers results.

A neat little trick though is the one mentioned in the call-out during Step 7!

I originally noted that as just something you could do (using all three abilities), but I didn’t see a use case for it at the moment. However, while discussing the charts with Nate from the Gamers Guild (A great youtube channel by the way!), he brought up that it would be useful due to it allowing you to reroll the same die an extra time.

So, to sum up this post…remember to watch for the timing of both the trigger and resolution of an ability! And if it doesn’t seem to mention a difference between the two, it probably triggers and resolves in the same step.

This is a foundational thing to understand for properly applying almost every possible rule in MCP.

I’d also like to mention a great article on the topic done up by Jacob from Xavier Protocols. He’s got a great breakdown of the wider impact on this!