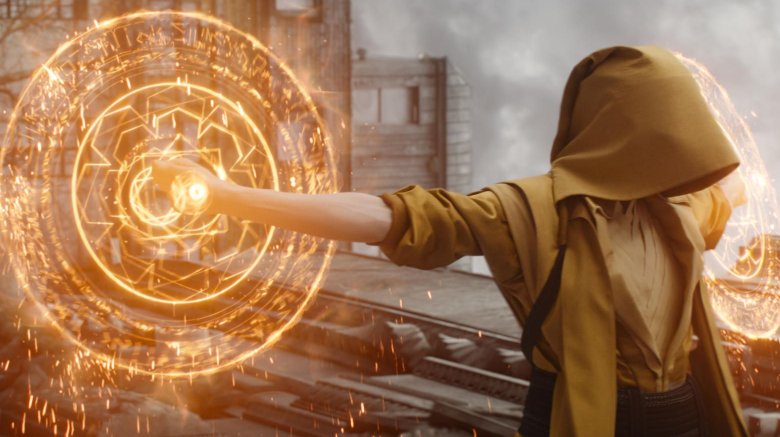 Imagine my surprise this morning, waiting in line in the dark dimension better known as the California Department of Motor Vehicles, when I opened today’s From Panel to Play and instead of just hinting at what the character could do they also just show off the freaking card:

The Ancient One is Strange’s predecessor as the Sorcerer Supreme on earth, having lived for nearly a millennia seeping in the mystic arts and training countless magical talents. Does she live up to the promise? Let’s find out!

After complaining last time about boring statlines and suggesting I perhaps stop covering this segment of cards, we get this beauty of a statline! 2-3-5 defensive spread? That’s a spicy meatball! 12 stamina size 2 and medium move on a small base is pretty in line with a 4, but the weak physical, average energy and absurd mystic is a completely new paradigm. Obviously there’s some defensive tech on her card we’ll be going over in a second otherwise this would be terrible – physical attacks are by far the most common in the game. But I feel like at least in the current meta physical and energy attacks can often feel samey as the vast majority of tanks are equally effective against physical and energy

but seeing a character who has a meaningful difference between physical and energy defense is a bit refreshing. Unsure of how it’ll play on the table but I just want to give AMG props for the design.

Next cool moment – all her attacks are Mystic. Have you ever wanted to cut through Wakanda/Web Warriors like a hot knife through butter? Then perhaps the Ancient One is for you! Range 2 is a bit of a problem, but the kit as a whole has tools to alleviate this, and 5 dice mystic with a pierce trigger is cash money in so many situations. If the Ancient One scrums up, watch out for some shards to the face!

Rounding out the builder suite is a solid range 3 flat power building option which is once again Mystic as a nice feather in the cap. And the Poison is a nice touch. As with a 4 dice builder it’ll be reasonably often you only do one damage, the poison can counteract the power gain if the target makes it to the next round which can make for a nice little grind advantage. I’ve been playing a LOT of Terrigen Mists recently and poison is obnoxious but, like all good status effects, never quite worth spending an action to shake. I will gladly spend a dead round plinking enemies with this to improve my power and worsen theirs.

I. Love. This. Synthezoid Avenger with better typing, stagger on damage, and a bonus die of strength. Unfortunately range 2 is a bit limiting compared to Vision’s range 3 but I think its well worth the cost. Also important to remember that the Ancient One DOES have bonus power generation, allowing you to on top of 2 move->Astral Strike a target assuming you didn’t spend any power on round 1, and in certain spread scenarios that means she can essentially hold an entire flank on her own on the back of this if the stars align.

We’ve seen a few variations on this ability recently, most notably Black Cat and Viper, but unlike those two the Ancient One guaranteed has power to use this every turn unless stunned/staggered. This also means that in conjunction with some way to squeeze out an extra power, she joins the club of characters who can single move and pick up a midline extract. Or just as appealing, single move and attack someone while standing on a midline secure. This also does some work in mitigating bows and pushes though be careful with your placement because a short tool is slightly longer than a r2 place.

I cannot wait to give this a spin on the table. This seems totally bonkers to me. How many times in this game is an attacker standing on a point while double tapping? Hint: virtually always. In the right scenario this is essentially the lovechild of a bow and stagger and thats not even counting the synergy with her Martial Artist capabilities and excellent range 2 attacks. I know it would be totally garbage but I really want to Hail Hydra or Sacrifice onto the Ancient One yoinking someone off a crucial point when they least expect it.

Rerolls and free power, whats not to love? The rerolls in particular bring her mediocre physical defense and dodge closer in line with a baseline 3 physical defense, and inflate her energy and mystic defenses to far above average.

Another classic passive, Martial Artist plays incredibly well with the other defensive tools layered on top. Someone attacks you from r3 (one of the premier attack ranges)? Winds them in to seal their Watoomb as you face tank the shot they thought would do work and turn around with your Shards of the Seraphim and Astral Strikes to restore balance. Roll some pesky hits on your initial roll? Reroll with a 5/8 chance of getting some new blocks. Each of these tools is reasonable on its own but I think when they combine the Ancient One is going to be a LOT tankier than people think on first glance.

Overall I think the Ancient One is a fascinating piece. Deceptively tanky, excellent attacks, and some solid power and action economy built in. I question her splashability in the 4 threat slot when compared to more elegant packages like Enchantress, Medusa, or Omega Red who have a more self-sufficient blind play pattern, but I think wherever the Ancient One is affiliated she will be an outstanding role-player. But as always, only table time will tell whether my predictions are right.

Finally a shout-out to our ancient partners (back to nearly the beginning of the site) with their best deals on MCP online: