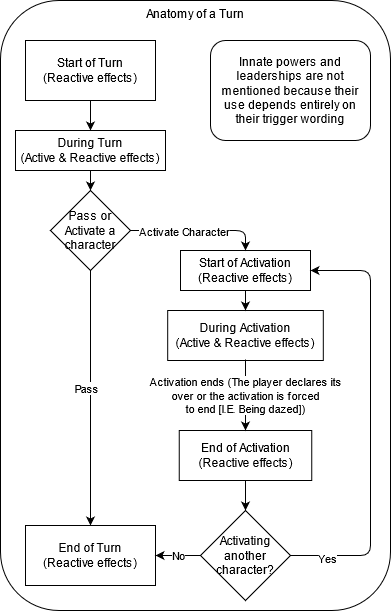 Hello again everyone, I’m back to cover another ruling from the forums!

Before we start, lets make sure everyone is on the same page with the background information.

Ok, lets dig into the meat of the discussion then!

As mentioned, until now I believe there was an understanding that your turn and the character activation(s) within it were entirely separate entities.

We knew this was true for the start of your turn and lacking specific direction otherwise, there were assumptions that this was also true for the end of your turn. This meant that after you had finished activating characters, you were able to play team tactics cards, because it was still your turn.

If we were to put that understanding of the structure of a turn into a flowchart, it might look something like this. Note that the chart doesn’t cover all branches(or the locking out of branches based on past activities).

This understanding meant that the activation of a character always led back to the “during your turn” phase of the game, which provided you the chance to use active abilities.

The new ruling tells us that the end of a turn is explicitly tied to the end of the last activation of the turn.

If we were to put the new understanding of the structure of a turn into a flowchart, it might look something like this.

What does this mean?

What does this impact?

I don’t think it impacts a lot (for reasons I’ll specify in a moment), but its a very important thing to understand. One notable effect is that you need to keep the new structure in mind when you use “All you’ve got”. You’ll no longer be able to use non-reactive tactics cards if you finish the “All you’ve got” activation (So no Field dressing them the same turn basically).

Why do I say it doesn’t affect that much?

So because we have control over when we declare our activation to be over, this means the biggest impact this has is when a character is dazed during its activation .

If you end up being dazed during your activation due to counter strikes, crisis rules or any other effect, it now means your turn is over and you don’t have any chance to play non-reactive abilities. So if at all possible, you’ll want to play those tactics cards before doing something with a character that could end up getting it dazed!

So to sum things up, I think this is mostly important from an “academic” point of view – understanding the structure of the rules. I don’t think this has much impact on the way we play now.

It’s probably a bit of a buff to all the out of activation damage causing abilities, but I don’t think it will impact many of the normal plays we perform. For the most part, you can still do almost everything you’d normally have done.

Anyways, thanks for reading and catch you another time!