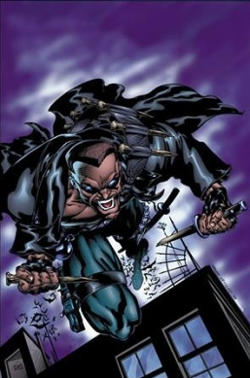 Another Tuesday, another First Impressions! This time: Eric Brooks AKA Blade.

Most of us know him as the first black movie superhero, slaying his way through more vampires than you can count across three films that range from great to terrible.

Personally I was surprised when I found out Blade was part of marvel way back when. Obviously his movies came out before comic crossovers were properly done, but I always assumed he was concepted as a standalone modern fantasy setting ala Buffy or the Dresden Files. But nope, Blade is a superhero teaming up with the likes of Doctor Strange and Iron Fist from time to time. But enough about Blade, let’s dig into Blade’s card!

Solid array for a 4 threat, essentially Cyclops with better Mystic. 4 physical is a deceptively important bump from 3 physical, as it affects Dodge rolls in a big way especially considering how rare effects that improve dodge rolls are. And with the promise of a ton of new and shiny mystic attackers on the horizon it’s definitely nice to have. Combined with some of the tools in his kit which we’ll get into momentarily he will be a reasonable tanky option in your roster.

Oohwee what a builder! Sure its range 2, but Mystic at least for the moment is a highly desired attack type to bypass martial artists and web warriors. Combine with AUTOMATIC bleed and wild pierce this is one of the stronger builders on 4 threat characters out there (barring Medusa and Enchantress). And definitely the strongest r2 builder on a 4 threat.

A solid if uninspiring ranged builder (especially after seeing Moon Knight’s Throwing Crescents), flat power gen and r4 is very nice for a character that doesn’t have a charge effect built in. If for whatever reason he’s stuck holding a point I would be reasonably whelmed double tapping someone with glaives.

As far as spenders go this is reasonable. Reroll any built in (requiring bleed of course but all your other attacks hand it out like its candy) and mystic typing means this is going to cut like a hot knife through butter against all the characters that are 3s across the board with martial artist / spider senses to keep them going. The medium advance on the back end makes it an attractive tool to move into r3, fish for a daze, and advance onto a free point / to pick up the extract your victim is holding. Not quite the attrition terror that is Hail to the King, but few spenders on 4s are. I expect Blade to be using this one or two times a game and using it to good effect.

Similar to Storm’s leadership, but with more flexibility and (usually) less range and a tax tacked on. On a small base this is just over 2 inches of being closer/further to a target, which isn’t enough to allow Valkyrie single move onto a midline objective, but for long movers / larger bases it opens up the option which is something to consider off the bat. Regardless of size if you’re at max r3 you can get outside of r4 which can be helpful in certain scenarios. This is also a big help for Blade reliably being able to stab people with his Katana.

Status removal is something you don’t care about until you really need it, so I see this as a nice utility element in key matchups, especially as we get more status appliers in the meta. Do note that this says you perform a Shake action so unlike Asgard’s leadership this does not bypass Shake prevention effects like Crystal’s passive.

Oof. Good luck ever hurting Blade on physical or mystic when he has 2 power up. Reroll any, including skulls is one of the strongest dice modification effects we’ve seen. I’d be curious to see the math on the average # of successes but I’d bet its ~3. Admittedly with the reroll timing clarification this is a little less good than we would have thought ~2 weeks ago but very strong regardless.

This is a bit of a win-more power, but a power and healing one for every nearby bleeding enemy is a nice feather to round out Blade’s cap – especially when all of his attacks either automatically apply bleed or do so on a wild. Admittedly having a target survive to the end of Blade’s activation is not ideal but I won’t say no to some power to fuel Supernatural Senses to weather the clapback.

Edit: As pointed out by Strike Better’s Ryan Farmer, this works on Dazed characters that still have the bleed token on them as that isn’t cleared until they flip. Perhaps cornercase but every little bit helps. Do remember that all of your attacks apply bleed after the attack and so if you one shot them with Blade they will not get bleed to trigger this bonus for you.

Overall I’m pretty pleased with Mr. Brooks. Admittedly on his face he feels like without the throwing glaives and the leadership he’d be a clunky battlecruiser like Wolverine often feels, but the extra ranged options and the mobility from Bump in the Night rounds him out cleanly. In particular I’m feeling pretty good about his ability to cut through the physical tank heavy teams that are starting to pop up – Sam Spam, Sin Cabal, Criminal Syndicate, etc. Will the Midnight Sons be a meta relevant faction (probably) or another GotG? We will have to see all the cards to know. But Blade is a pretty solid way to start.

Quick warning to readers but I’ll be out the ~rest of this week so if further cards are spoiled First Impressions might be delayed to next week.

Finally a shout-out to our partners who always have the most unholy deals on MCP online: