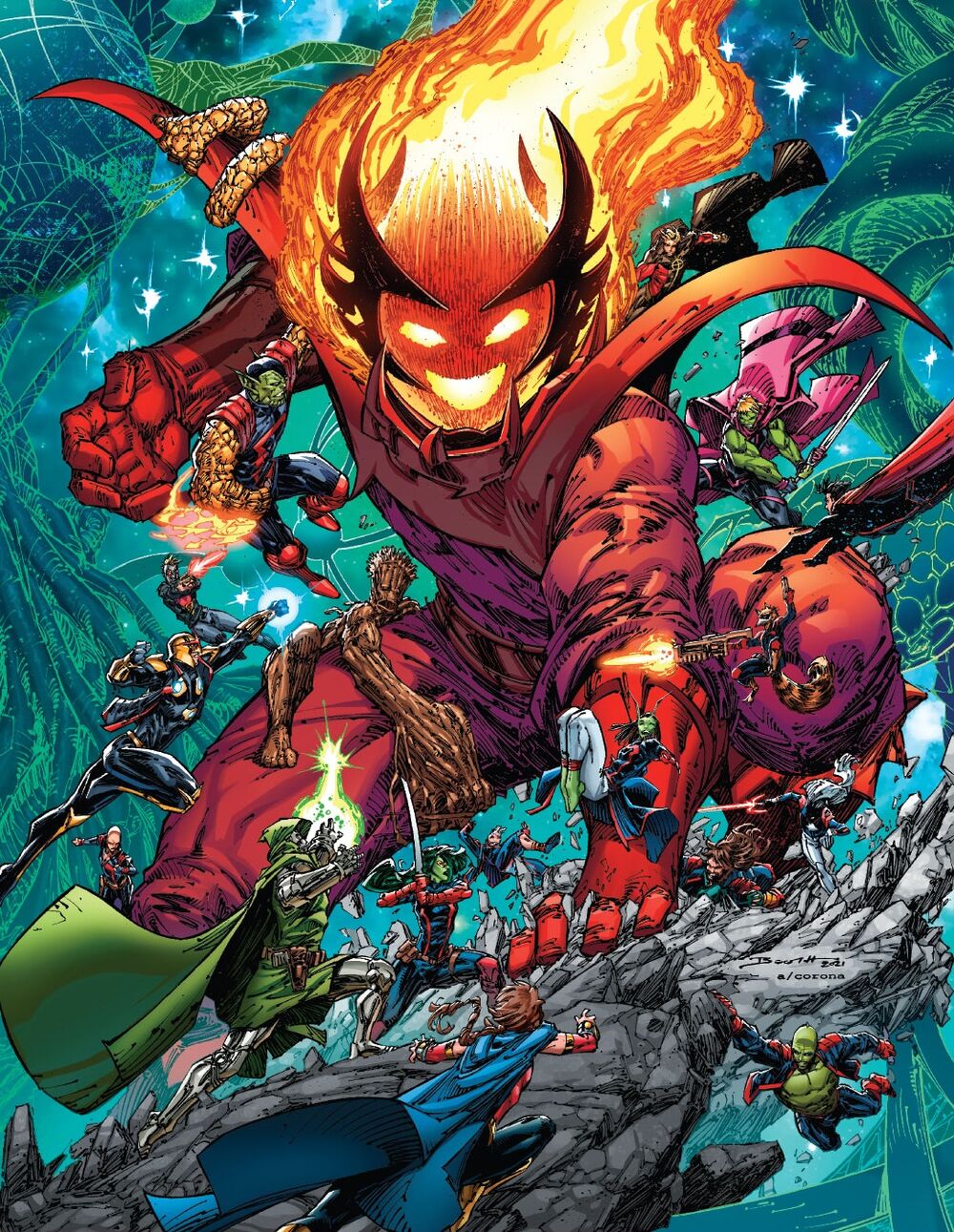 Another Tuesday another First Impressions! Just when you thought they’d slow down after last week’s explosive reveals they just go ahead and drop daddy Dormammu on us:

Everybody’s favorite Strange villain and MVC3 main (or is that just me? – Dormmamu-Taskmaster-Nemesis for life), Dormammu is the flame headed stepchild of the Faltine and ruler of the Dark Dimension. But do the rules live up to his legendary status? Lets dig in!

I can’t say my usual tagline of “perfectly standard” here because at a whopping 8 threat there is nothing to compare him to except 8 threat Thanos which is anything but. 22 stamina across both sides with a 4/4/5 array is the tankiest we’ve seen so far. Couple that with his medium move on a large base and size 5 and this has got to be one of the best base stats we’ve ever reviewed. Do note that while size 5 makes you ALMOST immune to throws and pushes, it doesn’t quite. Be wary of getting Dormmamu Hail to the King-ed into his minions, and Wakanda sounds like it could be an annoying matchup (why are there no size restrictions on BP/Shuri’s pushes?!?).

Next we’re going to break tradition a bit and talk about the Leadership before any of the attacks because its important here. Dormammu’s leadership makes it IMPOSSIBLE for you to splash him in other teams. Other teams BECOME Dark Dimension teams if you include him. That makes him instantly a build-around-me option and should be considered as such from the start. As far as Leadership abilities go, a bonus power to every character is reasonably midline, though the damage for having too much power clause is a BIT annoying (thankfully theres synergies with that elsewhere on his card we’ll cover later). This leadership encourages taking swarms to maximize the bonus of the leadership, so I wouldn’t be surprised to see a roster of Dormammu, all 2s in the game, and some 3s to taste popping up in the initial dojo rounds. But back to attacks!

Pretty solid builder to start out with (minus the actual power generation), Shadow Bolt is essentially Psionic Bolt from everybody’s favorite Mental Organism but with Energy typing and a Hex trigger slapped on for good measure. I am reasonably whelmed. Going off the rest of his card Dormammu is a decent bit power hungry (what a surprise from the interdimensional conqueror) so making sure you get good results with this is key.

Wow. This is going to dish out some pain. 8 dice mystic is already not unreasonable for 5 power but the Dark Miasma trigger is HUGE if you can get it off. A couple key things that might be missed at first blush:

1) Dark Miasma can keep triggering over and over again as long as you have unique targets. Do note that if you try to double spender the second one won’t chain the same way because Dark Miasma prevents additional targets that have been targeted by Incantation of Oblivion already this round.

2) The additional targets still have to be within range 3 (in addition to being in range 2 of the original target). This wording is nothing new as it’s essentially the same wording as M.O.D.O.K.’s Doomsday chair except it isn’t an automatic trigger and can chain multiple times.

Swarm teams will learn to hate and fear this spender, thats for sure!

Oh look, Gamma Leap. Ironically unlike Banner, Dormammu can’t afford to do this guaranteed from the start due to his flat power generation being 2 instead of 3. Admittedly I am unsure of how important that is because I haven’t done the math on where a medium move large base can get to on scenario with a single advance – if Dormammu can reach the midline in a single move then absolutely no worries, otherwise I’d probably bring Advanced R&D to research a way for Daddy D to do some teleporting round 1 to be extra scary.

This seems… insanely good. Pushing away someone every time they attack you is already huge as it can absolutely screw up All You’ve Got plays or anything similar unless they can procure a backstop. And even if they backstop, giving them Hex will be surprisingly helpful for keeping you alive. And if you give them Incinerate it just makes it easier for Dormammu and his minions to punish their foes for standing against darkness. TBH, for 5 power a round I’d rather do his place and hold up one of these than his spender in most scenarios which TBH is a good sign for me of his turn to turn functionality.

Finally, the crazy passive. Some ups and downs here. Downside – he’s functionally always stunned. Upsides – he gets bonus power if allies get hit or get lost in the sauce, and he’s got a cranked up version of Wanda’s passive on attacks. You’ve got that right, read it twice: he counts skulls in both the ATTACKER’s and DEFENDER’s dice pools towards total successes when attacking. Daddy D hits like a TRUCK.

And finally the collection of less sexy (but still sexy) passives – immunity to all statuses that make him easier to kill and Stagger, and Flight tacked on. In fact with Drop Off banned I am unsure if there is a single upside to Dormammu having flight, it might only be a hinderance for effects like Storm’s spender or Bird of Prey with Sam. But it feels thematically appropriate so fair enough.

All in all I am awed by the scope of Dormammu. I never thought the game would tolerate an 8+ threat character unless it did wacky control stuff like Thanos does but this Faltine conqueror is here to deal out death. Like I mentioned above in the leadership section I see him being a fascinating pair to 2 and 3 threat swarms to get the most out of his leadership (and his power generation from allies being hurt), and he creates an answer for the current All You’ve Got meta that’s been brewing. Will he win season 6 of TTS League? I doubt it. But I’m pretty sure at least SOMEONE will make top cut piloting this bad boy.

Finally a shout-out to our partners who always have the darkest (dimension) deals on MCP online: