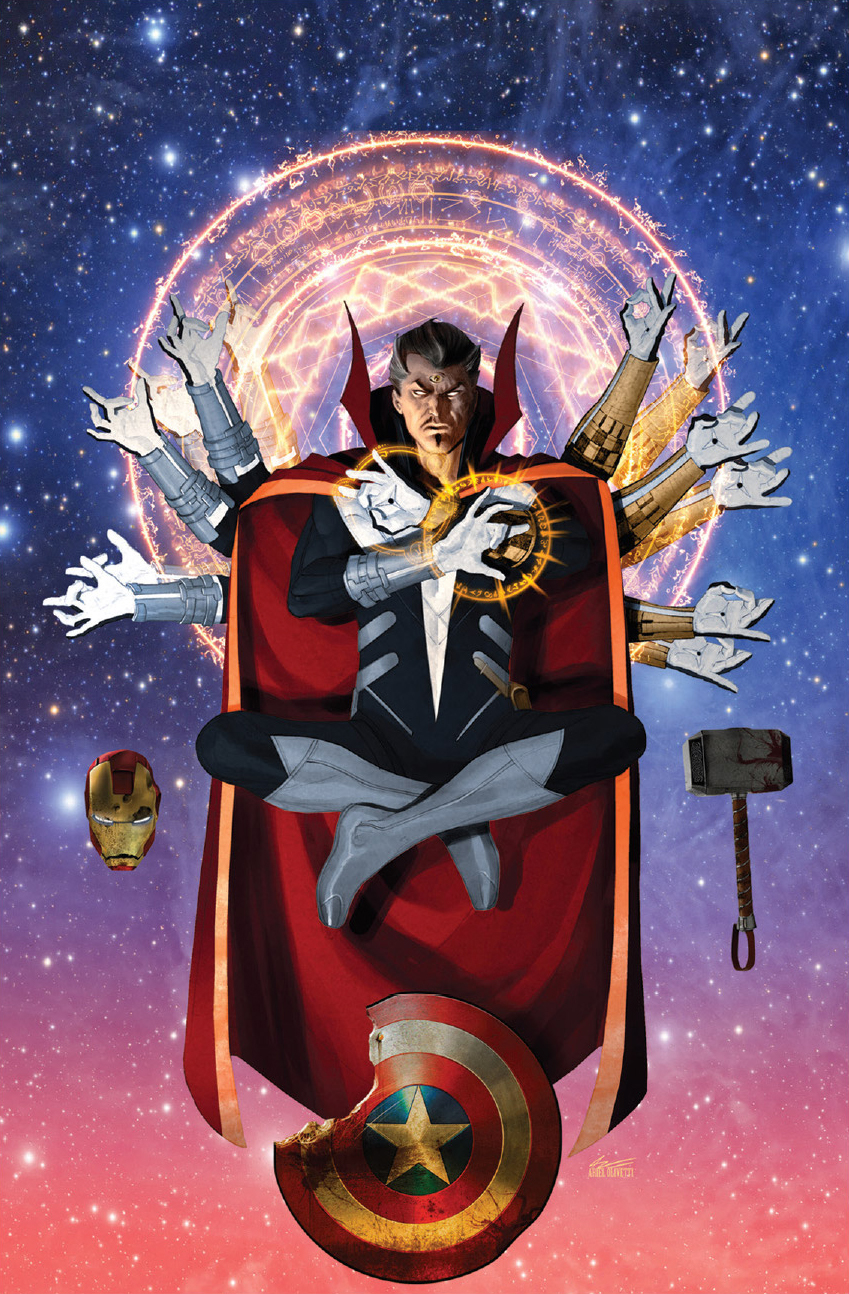 Another Tuesday, another First Impressions. This time: Doctor Strange!

With our third revisit of a character we get a new iteration of Strange, this time officially the Sorcerer Supreme. Is he better than the OG Strange we know and love? Let’s dive in!

Same stamina, worse energy, better mystic defense than OG strange. Pretty reasonable spread for a 5 threat, I probably prefer 3/4/4 to 3/3/5 in the current meta but with mystic affiliations like Midnight Sons and the Convocation being the new hotness perhaps the stocks in mystic defenses will rise enough for me to prefer the 3/3/5 spread.

This time, Strange has chosen violence. Trading in a bit of range and his push for mystic typing and pierce seems like a solid deal. Admittedly I feel the difference between range 3 and range 4 will be felt more and more in the coming months as range 3 attackers increasingly become the standard, but combined with strange’s other mobility tools (more on that in a bit) I think this is well worth the tradeoff.

Wowza. Sure it isn’t free but it probably should not be. Range 5, 6 dice and typing of your choice with a poison on damage trigger is a great way to spread the pain. And with Strange’s excellent power generation he’s guaranteed able to do this twice every round unless you are somehow poisoned and stunned on 0 power at round start. Bolts is probably often preferable if you’re in range 3 but this gives a massive amount of flexibility in your play options. This is an excellent attack to use on B secures, allowing Strange to hold from further back than other heavies and still threaten the opposing B/E point, hopefully ekeing out a range advantage to further express his ranged superiority playstyle. Unfortunately not enough to let him threaten a side D from the home D just quite but I think at this point we just have to accept that Cable/Hawkeye designs are the ones meant to dominate the D.

Oh wow. Aksani’son on crack (without the stagger trigger on injured of course). Sure it might be harder to get a wild and a block than a damage but removing statuses is a nice cherry on top. And thanks to Strange’s scalpel which we’ll touch on in a second, the Sorcerer Supreme is MUCH better at finding his way into a massive clump of enemies to get off the big score. Considering how few ways Strange has to reliably spend all the power he’s building I expect this spender to come up more often than you’d think.

Whoa mama. Lockjaw’s teleport, though admittedly slightly worse in cost and range in return for not costing an action, is a welcome addition to the Sorcerer Supreme. At 4 power its going to be a big ask to do this more than once per round, but I want to live the dream of 3x on a massive pop off turn. People have literally played a point down or unaffiliated to take Lockjaw for his mobility powers so putting it on a solid 5 threat beater without many other great power sinks seems like an INCREDIBLE deal. This also is a huge part of my hype for the Shining Circle of the Seraphim – Astral Ring-ing or Scalpeling forwards into a spender seems reasonably doable with Strange’s power economy, especially if you’re willing to spend your other action on a builder to fuel it. Still unsure of whether r&d to do this round 1 is a trap or not, but only dojo time will tell.

Power generation out the wazoo indeed. 3 power/round guaranteed is a big deal. Thats an unstoppable Bitter Rivals at the start of any round, or a Climbing Gear, or a bunch of other great 3 power costing tactics cards. It leaves a round 1 scalpel a mere 1 power away to do your best lockjaw/pentagram impression, and it means if you really want to you can afford a Shining Circle of the Seraphim EVERY OTHER ROUND. The world’s your oyster when you’ve been chosen by the Vishanti apparently.

We’ve seen a LOT of this power through OG Strange and it’s cash money. Low roll? Go again. Crit a bunch but still get an average roll? Roll again with the bonus dice. Missing a key wild? Roll again. This gives Strange a very consistent floor, and scales incredibly well with Shining Circle of the Seraphim. Knowing what results to reroll and what to keep will separate the scrubs from the Sorcerer Supreme.

Replacing Hoggoth’s Hoary Wisdom as Strange’s final layer of defense, we get a souped up version of Captain Marvel’s Energy Absorption. In conjunction with still having Eye of Agamotto, this does a LOT to boost energy/mystic defenses and further push Strange’s power economy into the stratosphere. All in all this makes him a LOT tankier into Mystic, roughly the same against energy, and worse against physical than his predecessor.

No surprises here, though no special tech/interactions with the rest of his kit to speak of. Always nice to have, unless your Sam Spam opponent is taking Bird of Prey.

In many ways this Strange is the opposite of his original iteration. Instead of being an often power starved support/control piece, this Strange is overflowing with power economy and has a very large personal output. Sure he does still support with his Scalpel for mobility on allies, but this Strange will feel perfectly comfortable diving into the enemy team and unleashing pain. Being a 5 threat mystic Cadillac he immediately draws comparisons against Scarlet Witch, Jean Grey, Cassandra Nova, and M.O.D.O.K., and I think he comfortably holds his own. Sure he doesn’t have bows or throws or other cute tricks, but he essentially has the most important part of Lockjaw stapled onto him. I don’t know what competitive Convocation teams will look like but in addition to what they end up fielding I fully expect him to be a compelling splash for certain teams who want a fighty anchor with a lot of power for tactics and mobility tricks.

Finally a shout-out to our partners who always have the supreme deals on MCP online: