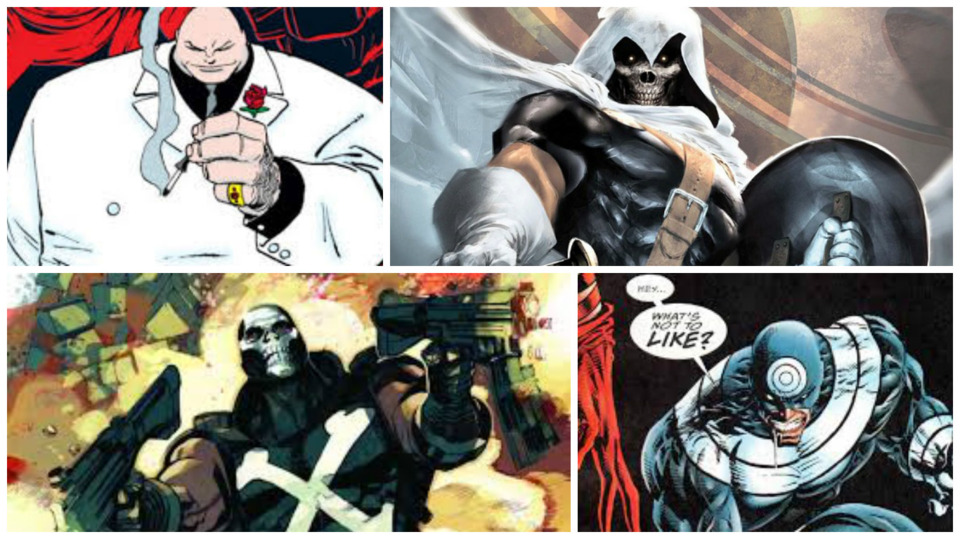 Hey guys! UtilityCookie here and back with another affiliation series, this time: Criminal Syndicate!

In this series I will try to guide you through my thought process in building a Criminal Syndicate roster. This series will not focus on building what I think is the premium optimised roster, (try to find what works for you) but I’ll try to give a solid foundation from where you can build  your own roster.

So I ask you, do you like to shrug off most attacks? Want to minimise your opponents efficiency? Don’t you just love secures? Then Criminal Syndicate is just the affiliation for you!

This core focuses on staying alive and being hard to remove from secures while they pass around (or steal) extracts. Kingpin and Crossbones reduce damage by one, The hood can heal them and bullseye zips around delivering chip damage and holds a backpoint or/and an extract while Black Cat does something of the same while setting up extracts steals. Since the leadership lets you count your own healthy models for 2 the opponent will have to commit hard to a single point to try and outscore you, if you have 2 characters on a point they will need 4 on that same point to deny you. Winning the points race in that way is where Criminal Syndicate excels.

What is Criminal Syndicate’s gameplan?
Criminal Syndicate wants to stay alive, stay healthy and end games relatively fast. They achieve this by using big healthpool models with solid defensive tech like reducing damage. An affiliated Hood has been one of the few newer releases at the time of writing that really helps them stay on their healthy side. Besides their tankiness they also have access to displacements in the form of pushes and throws on many affiliated characters. Kingpin, Crossbones, M.O.D.O.K, Omega Red all have options to either push, advance or throw in one or multiple ways. On top of that both Kingpin and Black Cat (also affiliated) have ways to stagger the opponent reducing action efficiency. These things combined with the first part of the leadership really disrupt the plans the opponent has. They need to keep moving to stay on points, they have to have at least double the models on secures to stay on parity while all the while they are getting thrown/pushed and staggered. Not only does this mess a lot with their action economy, the survivability stops the opponent from building a lot of power, which heavily reduces efficiency. If things go All According To Plan (bad pun I know) you should see victory around round 3 or 4. An often overlooked part of the leadership when people talk about Criminal Syndicate is the second part. Criminals can pass over extracts to each other like a hot potato, making it hard to remove the extract from a model by dazing. Once your character looks like he/she is about to daze, just pass the extract to someone else. This is especially useful on crisis like Legacy Virus where you can use it to score the extra 8 VP’s, Wakandan Herb where you can pass over the herb quickly to score it on the vessel or on Cubes where you can prevent characters from dazing in the power phase.

If we want to get the most out of the leadership, we need to bring crisis that score a lot of points on secures and we want extract that you also secure or have some benefit of passing around.

Crisis Selection
The crisis I will mention here are by no means a must take, but help towards the plan mentioned above. With the recent rules changes you cannot force a crisis AND point value anymore, luckily Criminal Syndicate is pretty flexible and can be good all rounders, so when building your roster we only need to build around a crisis and much less around point values since the core is very solid. They also mind it less to have an odd numbered extract in play while not having priority since you will race ahead on secures.

Since this extract can’t be picked up but has to be secured and can be worth 4 points your opponents can’t ignore it. Since our models count as double for the purpose of securing this crisis, Criminal Syndicate can really snowball quickly on this scenario. The downside is that while we have some sturdy models, they stay alive long when there are more spread out fights, on research station there will be a scrum and it will be easier to focus down your models. Something to keep in mind when you decide which characters to bring and which cards you will take.

The Struggle for The Cube Continues – 17 points – F shape

Something that is being thrown around a lot is that it is not a good idea to bring an odd numbered extract in the new crisis selection system. Since you will fall behind on the extract race when losing priority, the opponent might steal the middle on turn 1.

Criminals care a lot less and especially when it is cubes. For one, they will score more on secures and secondly the chip damage also plays handily into the game plan of auto damaging your opponent. Kingpin and Crossbones can each reduce the damage they take from the cubes and on Black Cat it will enable a move and stagger each round. Criminals are a very calculating affiliation to play. With priority you can bring a model that takes the central cube and retreat. When you do not have priority the opponent will probably do this to you, this might seem like a bad plan but it opens up some interesting lines of plays and can create some very solid plans to victory for Criminal Syndicate.

With Bullseye doing automatic damage, Omega Red doing automatic damage and a good amount of throws in faction it is very easy to just calculate when enemy models will daze in the power phase. Let’s assume the opponent got 3 cubes instead of 2, we will probably be up on secures so the score will most likely be tied or stay very close to each other. When the scores reach around 12-12, which is usually around round 3 you can set up those dazes very easily in the power phase by calculating the auto damage and open the round with a devastating All according to plan play where you take priority and finish the remaining models with priority and you can just scoop up all the points in that round and seal a game!

These are the two extracts where I would look first and build your roster around, that is not to say that others are not worthwhile exploring, Wakandan Herb and Deadly Legacy Virus can make excellent use of the leadership and if you build a more attrition focussed Criminal Syndicate roster Alien Ship and Skrulls are excellent picks to slow down the extract points while you race ahead on the secures.

The secures you can see above are the ones I would look at first when building a roster, depending on your playstyle they all fit the Criminals gameplan of staying alive or score fast. Criminals need to plan a lot less on secures and you can focus your rosterbuilding process more on the extract side since the secures are easily scored for you. The varying secures all bring something Criminals want, be it a split set up so your characters are less focussed down, interacting for extra healing, fast power generation or just a very points heavy secure.

You do need to keep in mind that there is one type of secure that your leadership does not work on, the ‘’Flip secures’’. These are the secures where you interact and roll for and afterwards you keep under your control, your characters do not count double when contesting these. Something to keep in mind! This does not mean that Criminal Syndicate is bad on these types of secures, Criminals can run a pretty wide roster and are sturdy so they can stick around long enough and keep flipping these secures to secure a win. And besides that there is always the chance you pull research station and still have some good use of your leadership.

Now that we know which crisis they like to take and what the general gameplan is, it is time we take a look on how to build your roster so we can execute our plans to the fullest.

More on that in the next chapter of Smooth Criminals: A look into Criminal Syndicate – Chapter 2 – Building a roster